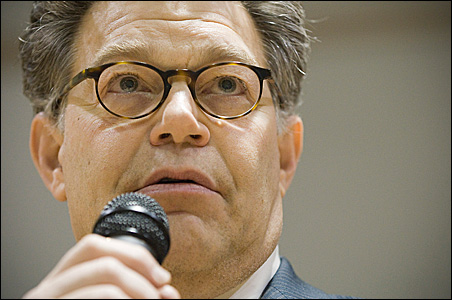 MinnPost photo by John Noltner
Al Franken remained cautious Tuesday night, but some DFL insiders believe he may be ahead in the fight for endorsement to take on Sen. Norm Coleman this fall.

Mike Ciresi, Jack Nelson-Pallmeyer and Al Franken tried to convince those around them — and perhaps themselves — that they came out of last night’s chaos with strong support at district conventions, which will be held across Minnesota from the end of this month until April.

Candidates positioning for endorsement battle’s next phase
So, which of the three is in the best shape as the process moves to Step Two?

But some of Nelson-Pallmeyer’s supporters weren’t so optimistic.

“He started too late,” said Gary Schiff, a Minneapolis City Council member and Nelson-Pallmeyer supporter. “It’s going to be Franken on the first ballot.”

Other DFLers were saying the same sorts of things Tuesday night.

Interestingly, Franken was the most cautious in assessing the situation:  “It sounds like we sent a lot of people to the district conventions.”

That’s not exactly a snappy response, Franken was told.

“Many a slip twixt cup and lip,” he said.

A reporter and a couple of Franken supporters looked at the candidate, blankly.

He went slower for the reporter.

“What does that mean?”

“I don’t know who said it,” said Franken, “Google it. But it means a lot can go wrong between the start and finish.”

In truth, that’s what Franken’s foes now seem to be banking on. That somehow Franken will stumble — with a slip of his lip — between now and the state convention.

Laughing he noted that he’s certain to have at least two delegates at the district convention. Both he and his wife, Ann, were chosen at their caucus.

They laughed. The two do seem to be enjoying this race.

But they’ll need an additional 600 delegate votes to win endorsement. And here’s what makes you believe that doubts are starting to get larger among Ciresi’s supporters: Like every other underdog in America, they’re now comparing themselves to the New York Giants, who pulled off a big upset over the New England Patriots in Sunday’s Super Bowl.

“We’re the Giants,” said Ciresi aide Leslie Sandberg to anyone who would listen. “Tonight is just the beginning.”

Perhaps Ciresi is the Giants.With the list of delegates more defined — there are about 10,000 delegates to the district conventions — perhaps Ciresi’s campaign can suddenly catch fire. “The universe has been contracted,” Ciresi said. “The playing field is more defined.”

Nelson-Pallmeyer banking on his persuasive powers
Or perhaps, Nelson-Pallmeyer is right and that over the course of the next few weeks he can persuade delegates to follow their progressive hearts and join him.

Nelson-Pallmeyer is bright and thoughtful. And he is a skilled debater, so skilled that Ciresi and Franken often end up siding with him in candidate debates. Tuesday noon, for example, the three debated on Minnesota Public Radio, and both Ciresi and Franken frequently said, “As Jack was saying. . . .” Or, “I agree with Jack on that.”

Nelson-Pallmeyer chuckles about how often that happens. But the reality is, debating points don’t lead directly to delegate support. The system isn’t that rational.

In fact, there was nothing rational about the DFL caucus system Tuesday night. Throughout the state, there were reports of traffic jams and ballot shortages and general disorganization.

DFL party leaders were trying to say that the chaos just shows the passion for the DFL this time around. But it could be argued that wasn’t passion out there. That was just a mess.

Caucuses are supposed to be a chance for neighbors to get together to talk about their favorite candidates. But just getting the presidential preference ballots into the hands of those who were patient enough to stand in line was such a time-consuming task, there was almost no time for discussion of the Senate race.

Discussion time gets lost amid caucus chaos
One small example of the Senate “discussion” process:

At the south Minneapolis caucus I attended, Obama clobbered Clinton. But the other business of the night was the selection of 64 people to be delegates or alternates to the Senate District convention.

The caucus leader asked who was interested. Sixty-four people stumbled to the front of the room, ready, willing and able to be a delegate or alternate. But just about the time the whole crew was ready to be signed up, someone in the crowd yelled, “Who do they support?’

This question seemed to come as a surprise.  Those attending the caucus actually wanted to know which Senate candidates were going to get support?

“OK. Two minutes to try to persuade people to join with you,” the caucus leader said.

It should be noted that in this one precinct, Franken’s support was huge. Ciresi’s was almost nonexistent. Nelson-Pallmeyer finished second, and Uncommitted was third.

But there was a problem with this slate, which proportionately represented the political views of the caucus.  The new slate wasn’t gender-balanced. DFL rules require gender balance among delegates.

“We have more women than men!” the caucus leader said. “We need men.”

Men and women scrambled to get out of the building, clearly wanting no more of this exercise in democracy.

It was Franken who put the evening in perspective.

“Just say the night was a victory for Minnesota — or whatever,” said the man who likely is the leader in the Senate race, unless he slips twixt cup and lip.