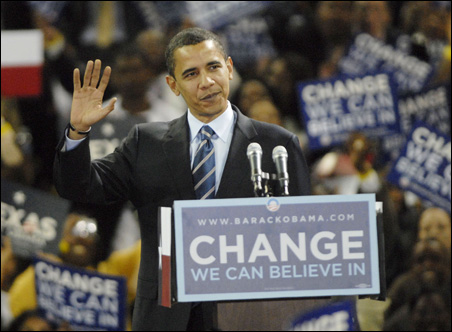 Sen. Barack Obama continued his relentless push for the Democratic presidential nomination by winning the Wisconsin primary and Hawaii caucuses Tuesday night and forcing Sen. Hillary Rodham Clinton, the former frontrunner, to wait at least two weeks to get back in the race in the Texas and Ohio primaries. But will it be too late?

On the Republican side, Sen. John McCain continued his march toward the nomination with CNN and other news organizations declaring him the winner over former Arkansas Gov. Mike Huckabee moments after the polls closed at 8 p.m. Central.

The New York Times reported that exit polls showed that Obama, as he did in last week’s Potomac Primary, cut into Clinton’s base of women and blue-collar voters while she did well with white women over the age of 50.

Obama’s momentum continued as he won his 9th and 10th consecutive state primary election or caucus. CNN reported that of those who decided in the last month, Obama beat Clinton 62 percent to 37 percent. And of those for whom the economy was the top issue, Obama won 55 to 43 percent. More than 60 percent said Obama would be more likely to unite the country.

The Times said about “55 percent consider him (Obama) more likely to improve the relations the United States has with the other countries.” About half of Obama’s supporters said they would be satisfied if Clinton were the nominee, while 55 percent of those who voted for Clinton would be content if Obama won.

Obama favored as more electable
On the issue of who is more electable in November, the exit polls, according to CNN, showed that Obama was favored over Clinton 63 percent to 37 percent.

Chris Cillizza of The Washington Post noted that the election campaign in Wisconsin, while fairly short, was tough.

“The ramped-up rhetoric has been especially noticeable on the Democratic side, where Clinton and Obama have exchanged blows on television for much of the last week. Clinton started the fracas by attacking Obama for his refusal to debate in the state; the New York senator then upped the ante by hitting Obama on his alleged lack of solutions on health care and Social Security. Obama struck back with ads of his own that decried Clinton’s negative tactics as nothing more than politics as usual. And Clinton yesterday accused Obama of plagiarizing portions of a recent speech and continued to question his vows to reform the campaign finance system.”

After all the rhetoric and political infighting, this campaign seems to revolve around Obama’s continued call for political change.

In an editorial endorsing Obama, the Milwaukee Journal Sentinel said: “His experience as community organizer, state legislator, U.S. senator and campaigner who took a dream and became a credible contender measures up well against Clinton’s experience as poverty lawyer, first lady and U.S. senator. The party would be well-served with either candidate, and the historical implications are huge with each. But in Obama, there is a potential for meaningful change that does not exist with any other candidate.”

A different Wisconsin these days
Just before Tuesday’s election, Jeff Greenfield put the race in perspective in Slate: “Obama is supposed to win Wisconsin because it’s the home of modern progressivism, not to mention a perennially juiced-up student population and ground zero for the kind of ‘challenge to the system’ campaign that Obama exemplifies. Well, yes and no. It’s true that Madison — the home of the University of Wisconsin, where I more or less studied some time ago — is a town that appears at times to search the world for sister-city compacts it can form with leftist nations. And Wisconsin is the state that, a century ago, Gov. and then Sen. Robert La Follette turned into a laboratory for ideas like workers’ compensation and the income tax that helped inspire the New Deal.

“But that’s only one side of the state. At the end of the 20th century, Wisconsin’s principal political ideas were tax cuts, school choice, and welfare reform, championed by long-serving Republican Gov. Tommy Thompson. … But if the hopes of Sen. Clinton rest on the votes of white working-class voters, Wisconsin ought to be fertile ground for a campaign reset. Conversely, if Obama can produce another February blowout — in a primary state with a tiny African-American population — that will tell us something as well. After all, if Clinton cannot rally the beer-drinking Democrats in the state that gave us Pabst, Schlitz, and Miller, where can she?”

She’s hoping for Texas and Ohio (along with Vermont and Rhode Island), where 370 pledged delegates are at stake on March 4.

Democratic delegates — by the numbers

Another boost in Obama’s momentum