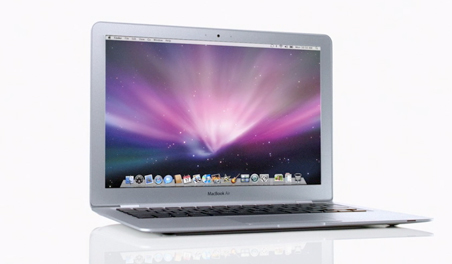 The MacBook Air ranges from 0.16 of an inch to 0.76 of an inch thick on the hinged end, making it “nearly as thin as your index finger,” Apple’s website notes. It is “ultrathin” — so thin it fits in a manila envelope, as demonstrated in a TV commercial. The commercial features no narration and merely one fragment of text: “The world’s thinnest notebook.”

Steve Jobs’ company has emphasized the skinniness of its computers for some time now. Last August, it unveiled a 2-inch thick desktop, heralded by the slogan: “You can’t be too thin. Or too powerful.”

Apple has declared itself the master of “thinnovation.” (Head to your nearest Apple and you’ll see this word-creation plastered on the store-front window.) It troubles Shannon McCartney-Simper, manager of business development of the Eating Disorders Institute in St. Louis Park.

“My 12-year-old daughter and I were looking at the MacBook Air online, and the words right out of her mouth were, ‘Wow, look how thin that is!’ ” she said. “Of course that’s appealing to young people. It’s what they’re used to believing is the ideal.”

McCartney-Simper can’t help but consider the parallels between ultrathin computers and people who are striving to be ultrathin. “These laptops are really thin and portable — almost like you can hide them,” she said. “And then you take that to another level, and you think of how women so often want to hide their bodies.”

Is thinner happier?
To other consumers, she acknowledges, this message may seem subtle, if not a stretch. “But effective marketing is often quite subtle,” said McCartney-Simper, who plans to address the ad campaign in upcoming speeches around the Twin Cities.

What worries her most is the fact that Apple’s campaigns are clearly targeted at young people, who tend to be particularly susceptible to eating disorders. It seems to tie right into a major cause of eating disorders, as listed on the Eating Disorders Institute’s website: Sociocultural expectations of thinness and unhealthy body image. Magazines and television shows perpetuate the ideal of thinness and the notion, ‘The thinner you are, the happier you are.’ As teens overhear conversations about the newest diet, weight loss and negative body image, the real message continues to be, ‘A person’s physical appearance is more important than what is inside.’ “

The kibosh on the slogan
The slogan Apple used to herald its new iMac last August, “You can’t be too thin. Or too powerful,” didn’t last long.

On Aug. 7, a Mac-oriented blogger wrote a post titled, “Wanna take bets on how long before Apple is forced to pull this headline and apologize?” One reader wrote, “I say it is gone by tomorrow.” Others insisted the slogan should stay.

Two weeks later, another Apple blog noted that the Alliance for Eating Disorders Awareness had just issued a statement censuring Apple’s new slogan. “As not only the Executive Director of The Alliance, but also a recovering anorectic and exercise bulimic, I must say that I find the new iMac campaign troubling and extremely triggering,” said the Alliance’s Johanna Kandel in a statement, according to this post.

By then, Apple had removed the slogan from its website.

Looking for that deeper meaning
I tried to move beyond physical appearance and learn about the inside of the MacBook Air during a recent visit to the Mall of America’s Apple store. For a Sunday evening, the store was surprisingly crowded, the MacBook Air enticing many curious shoppers. “Look how thin this is! Crazy!” one young man gushed. “It’s pretty,” said another man, who appeared to be in his late 20s.

Once I made my way up to a MacBook Air on display, a young sales rep approached me.

“The commercials only point out its size,” I said. “What can you tell me about its features?”

His answer surprised me. He said the MacBook Air processes more slowly than any other Mac. Why? Its processor had to be shrunk by 60 percent in order to fit in the tiny frame, the rep told me.

Of course, it’s still very fast, he immediately added. And the screen is super bright. But a 60 percent smaller processor?

In other words, contrary to Apple’s assertion, you can indeed be “too thin.”

This laptop’s skinniness comes at a high cost: $1,800 and slower processing.

Don’t judge a computer by its cover
One obvious difference, I realize, is that thinner laptops are more portable and weigh less (The Air comes in at 3 pounds, compared with 4.5 to 6 pounds for most laptops).

So I called a computer expert to make sure I wasn’t overlooking the improved usability of the MacBook Air. His answer surprised me, too.

“Thickness doesn’t make much of a difference in usability,” said Matt Wash, web and media specialist at the University of St. Thomas. “You’re only eliminating one of three dimensions.” But, he notes, “It is lighter. If you’re carrying a briefcase all day, that decrease in pounds is certainly an advantage.”

Wash has no ax to grind with Apple. In fact, he’s a Mac user. But the MacBook Air doesn’t wow him. (See related story below for his reasons why.) Those who are impressed by it, he said, may want to reconsider their criteria.

“Many people are overestimating the importance of the thinness. That’s the only feature in a computer you can actually see, but that isn’t the factor that makes a difference in performance.  The most important features, when it comes to performance, are processor speed and memory.

“Thinner computers don’t manage heat as well so they’re typically not going to be as fast,” Wash added.

Apple is training us to trust face value, without digging deeper. “Seeing is believing,” it says.

But as for me? I want a computer with a great personality.

1. You can’t change the battery. It may not be important for most folks, but if you’re trying to use your computer through a long airplane ride, swapping out batteries is a pretty important thing.

2. There’s only 1 USB port. That means you can only use 1 device with your laptop at a time.

3. The USB Port is accessible via a trapdoor and won’t sit flat on a desk if you’ve got a mouse, or anything attached.

4. There’s NO CD/DVD drive. Forget about installing software from CD or watching movies on DVD.

5. There’s no Ethernet port, which means if you still get your Internet from a network cable, you can’t get on the Internet.

6. It’s integrated the “Multi-Touch” capability into its touchpad — a technology that proved useful for the iPhone, but has yet to prove itself in the notebook market.

Points for a parent to consider

Shannon McCartney-Simper urges parents to address Apple’s ad campaign with their children. “As parents, it’s our job to look at some of these ad campaigns with our children and sit down and have a conversation,” she said. Questions to ask: “Why do you like that ad? What else is that ad saying to you? Is that ad talking to you just about computers? Why is being thin so important?”

McCartney-Simper reminds parents and young people alike to act on their indignation. “You have a voice. You can write to these companies and say, ‘Hey, I didn’t like your ad.’ Or, ‘This is how your ad made me feel.’ “