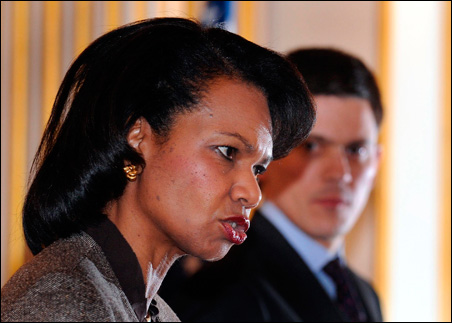 In stereo pleas for more help in Afghanistan, Secretary of State Condoleezza Rice and Defense Secretary Robert Gates are giving voice this week to growing U.S. frustration with wavering allies. That frustration comes as several authoritative reports sound new alarms about the state of NATO’s efforts in Afghanistan. And if that weren’t discouraging enough, the United Nations said Wednesday that Afghanistan’s opium crop “is set for another bumper crop this year, giving a windfall to the Taliban who tax farmers,” Reuters reported.

Gates, who sent a letter to NATO defense ministers last week asking for commitments of more equipment and troops, bumped the pressure up a notch Wednesday by publicly telling the Senate Armed Services Committee, “I worry a great deal about the alliance evolving into a two-tiered alliance, in which you have some allies willing to fight and die to protect people’s security, and others who are not. … There are allies that are doing their part and are doing well. The Canadians, the British, the Australians, the Dutch, the Danes are really out there on the line and fighting, but there are a number of others that are not.”

On the same day, Rice took the issue to London, where she met with Prime Minister Gordon Brown and Foreign Minister David Miliband. Today, she and Miliband made a surprise flight to Afghanistan, delivering what the International Herald Tribune termed a “joint message of support and prodding to Afghan officials, including President Hamid Karzai” in Kabul and meeting with NATO troops in the former Taliban stronghold of Kandahar. The BBC explained the backdrop: “26 NATO members have contributed troops to the International Security Assistance Force (ISAF), but many U.S. allies, including Germany, France, Spain, Turkey and Italy, have refused to send significant numbers of combat forces to the south.” That has created a rift “between them and the U.S., UK, Canada, the Netherlands, Denmark and Romania, whose troops have borne the brunt of the counter-insurgency fight in recent years.” Canada, particularly, has suffered many casualties; it said it might pull troops out if other nations don’t help more in the dangerous Kandahar area.

Atlantic Council report bleak, blunt
Stakes are high, the Atlantic Council of the United States’ new report bluntly said (PDF): “Make no mistake, NATO is not winning in Afghanistan. Unless this reality is understood and action is taken promptly, the future of Afghanistan is bleak, with regional and global impact.”

Here, the report says, is the challenge:  “On the security side, a stalemate of sorts has taken hold. NATO and Afghan forces cannot be beaten by the insurgency or by the Taliban. Neither can our forces eliminate the Taliban by military means as long as they have sanctuary in Pakistan. Hence, the future of Afghanistan will be determined by progress or failure in the civil sector. However, civil sector reform is in serious trouble. Little coordination exists among the many disparate international organizations and agencies active in Afghanistan. Legal and judicial reform (including reducing corruption), and control of narcotics are interdependent efforts and must receive the highest priority.”

The council called for quick completion of an official assessment and the creation of “a comprehensive campaign plan that brings together all of the disparate security, reconstruction and governance efforts and coordinates and integrates their work.” The  report noted that “international efforts engaged in rebuilding and securing Afghanistan include over 40 countries, three major international organizations (the UN, EU and NATO) and scores of other agencies and non-governmental organizations,” adding, “They are disorganized, uncoordinated and at present insufficient. That must be fixed.”

Three other reports are just as grim
New reports by the NATO Defense College, the International Institute for Strategic Studies (IISS) and the Afghanistan Study Group (ASG) are just as grim. “The progress achieved after six years of international engagement is under serious threat from resurgent violence, weakening international resolve, mounting regional challenges and a growing lack of confidence on the part of the Afghan people about the future direction of their country,” the ASG’s Jan. 30 report said (PDF). “The United States and the international community have tried to win the struggle in Afghanistan with too few military forces and insufficient economic aid, and without a clear and consistent comprehensive strategy to fill the power vacuum outside Kabul and to counter the combined challenges of reconstituted Taliban and al-Qaida forces in Afghanistan and Pakistan, a runaway opium economy, and the stark poverty faced by most Afghans.”

The ASG concluded, “A concerted effort to regain strategic focus and momentum in Afghanistan is needed to reverse the backsliding of the last two years and to secure our considerable investment thus far. … U.S. and other key countries must concentrate and coordinate their efforts to beat back the insurgency, propel economic development, and build a competent and capable Afghan government.” Both reports say Afghanistan’s neighboring countries must be involved or the mission cannot succeed.

As NATO defense ministers began closed-door discussions on Afghanistan at a conference in Lithuania today, these analyses — along with the pleas of Rice and Gates — provide both an acute sense of urgency and concrete suggestions for their deliberations.