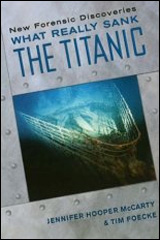 Remember the Titanic? The movie, sure, who doesn’t? But how about the big Titanic exhibit that came to St. Paul’s Union Depot in the winter of 1999? (Big Titanic exhibit. How’s that for a redundant phrase?)

About 400,000 people trekked to downtown St. Paul to see artifacts dredged up from the shipwreck at the bottom of the sea, from plates and clothing, to playing cards and razors. Plus a 20-foot section of the hull.

And in what was supposed to be a history-making exercise, they blew the ship’s whistle for three seconds one fine February morning; it was extremely over-hyped — a publicity stunt that drew tens of thousands to Lowertown to hear the whistle blow for the first time in 87 years. Ultimately, though, it was quite under-whelming.

Well, the publishers of a new book about the doomed passenger liner remember the exhibit, and are hoping to find a local trove of Titanic fans who’ll be interested in the book: “What Really Sank the Titanic?”

The hardcover book will be released next month by Citadel Press; cost is $22.95.

Tim Foecke, one of the authors, has Twin Cities ties, too. He earned a PhD in material science from the University of Minnesota, and is now a staff materials scientist at the National Institute of Standards and Technology in Gaithersburg, Md. He’s also an adjunct professor at Johns Hopkins University in Baltimore.

He and co-author Jennifer Hooper McCarty used their technical skills and knowledge to examine the ship’s design and construction in an effort to discover why she sank in just hours that fateful night. They examine the metal used in the hull and all aspects of construction.

I don’t want to spoil the surprise, because they clearly put a lot of time and effort into the investigation. Let’s just say it’s a rivet-ing conclusion.