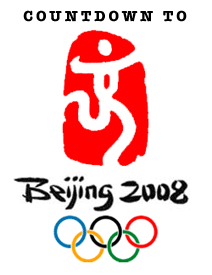 A boycott of the Beijing Summer Olympics — which are now just six months away — would seem to be a no-brainer. But it would be so 20th century.

Back in the day, boycotting Olympic Games seemed as common as a Bulgarian weightlifter testing positive for steroids.

Then, the Cold War ended. Post-9/11 alliances turned complex as the global economy knitted itself through every relationship. Energy scarcity took hold.

And China is bigger, stronger and, right now, just about wealthier than any of the other 200 nations poised to compete in what will be, arguably, the most corporate, most political and most examined sports event this planet has ever witnessed.

Potential boycott has become non-issue
Way back when, 15 years ago, a boycott of the Beijing Games seemed to have the possibility of gaining traction. Now, frankly, it’s a non-issue. Even for critics of the Chinese regime, boycotting these Olympics seems counterproductive.

“Everyone will acknowledge that China has very serious human rights abuses,” said Barbara Frey, director of the Human Rights Program in the College of Liberal Arts of the University of Minnesota. “But everyone also acknowledges that China is an important international actor. Every country and every region has important economic ties, and we all benefit from China’s development … Right now, China is funding the world.”

The Summer Olympics will be a two-way street of elevating China’s international image and sucking up to the regime. Local businesspeople who travel frequently to China say Hu Jintao’s regime is nothing if not extremely good at marketing its achievements. And, of course, key Olympic sponsors and partners — from GE to McDonald’s to the National Basketball Association — are leveraging the Games to capture a market of 1.3 billion people, who are becoming increasingly urban, educated and middle-class.

Still, there are increasing reports of an Olympic crackdown on human rights dissidents.

With last Friday the six-months-to-go milepost, the International Olympic Committee had to defend its selection of Beijing once more. Mother Jones recently published a stunning piece about the ravaging of the land, air and water in China and its effects on the rest of us.

Then, there’s China’s backing of Sudan and that government’s violent control of the Darfur region, in which hundreds of thousands of people have been killed and millions forced to flee. China is Sudan’s most important trading partner and political ally.

That’s where most Olympic noise is coming from. Activists worldwide have targeted China for its support of the Khartoum government. It’s all about oil — China buys 70 percent of Sudan’s oil – and violating a United Nations resolution. The key organization — Olympic Dream for Darfur — has referred to the Beijing Games as the “Genocide Olympics.”

It’s a percolating movement that has affected the Chinese government in ways China watchers have never seen before. Dream for Darfur isn’t challenging China for human rights violations in China. Rather, it is fighting China on that regime’s human rights positions outside of China. As one of Sudan’s leading arms suppliers, China is backing the six-year-long genocide, activists say.

The Olympics are a real vulnerability. Chinese leaders want these Games to go off without one single hitch.

“Since we have publicly linked China, Darfur and the Olympics, it’s been the only change in China policy in five years,” said Dream for Darfur director Jill Savitt. “China has gone from irresponsible, obstructionist and enabling to just enabling.”

Indeed, late in January, China warned Sudan that “the world is running out of patience over what’s going on in Darfur.”

On Tuesday, in six cities in the United States and many more across the world, Dream for Darfur has organized protests at Chinese consulates and embassies.

But Dream for Darfur has never called for a boycott.

“Boycotts don’t work,” said Savitt, speaking by phone from her New York office. “Boycotts are tired. They’re old school. They’re kind of fringy and lefty … We’re going to the Games. From a campaigning sense, we need to stay engaged.”

An Olympics politics primer
Class, as quickly as we can, let’s review Political Olympics 101.

The revival of the ancient Olympics in 1896 was organized by Baron Pierre de Coubertin, with French nationalism as its cornerstone. When you have flags and trumpets, politics follow.

By 1936, Adolf Hitler staged his “Nazi Olympics” to promote the rise of his fascism and genocide.

Jump to 1956, the fledgling People’s Republic of China stayed away from the Melbourne Games when Taiwan was allowed to participate.

In 1968, student riots in Mexico City threatened the Olympics, and countless students were killed by soldiers. Meanwhile, as race riots peppered America’s cities, some U.S. black athletes stayed home and boycotted their own team. Others competed, including U.S. 200-meter medalists Tommie Smith and John Carlos. Their raised gloved black fists on the victory stand remain the iconic image linking politics with sports.

In 1972, Palestinian terrorists invaded the Olympic Village in Munich at a Games that were staged a mere 36 years after Hitler’s charade. Nine Israeli athletes were killed.

In 1976, 25 African nations boycotted the Montreal Games because New Zealand was allowed to participate. A New Zealand rugby team was competing in South Africa at the time despite an international ban on sports contact with the apartheid nation.

In 1980, President Jimmy Carter announced a boycott of  the 1980 Summer Games in Moscow because of the Soviet Union’s war in Afghanistan. More than 60 nations joined Carter’s call, including China.

Four years later, in retaliation — and citing bogus security concerns — the Soviets called for a boycott of the Los Angeles Games. Some Warsaw Pact nations followed. But, after nearly 30 years of being on the outside looking in, China returned to the Olympic fold.

In 1988, even though the South remained technically at war with the North, the Games were held in Seoul, Korea. North Korea refused to compete, and Cuba joined that mini-boycott.

By 1993, four years after the televised massacre in Tiananmen Square, China first bid for the Summer Olympics, the 2000 Games. Beijing’s effort was defeated by the International Olympic Committee. The Chinese government was outraged.

Those who mutter, “Politics and sports don’t mix,” must live on some other globe, or are spokespeople for the Chinese government.

“To link the Darfur issue to the Olympics is a move to politicize the Olympics, and this is inconsistent with the Olympics spirit and will bear no fruit,” China’ Foreign Ministry spokeswoman Jiang Yu told reporters at the African Union summit last month.

On the ground
The reality is, as the U’s Frey points out, too many people have too much to lose by raining on China’s Olympic parade. On the flipside, many have much to gain by cultivating a cordial relationship with China.

Once a month, about 70 members of a group called U.S.-China Business Connections meets at Minneapolis Community & Technical College. Men and women — Chinese-born, American-born, Chinese émigrés — exchange business cards and share sophisticated information on ways to trade and conduct business with China. These are all well-meaning, entrepreneurial types. They are remarkably aware.

Mention an Olympic boycott to most of them, and they chuckle, be they American-born investors or Chinese-born economic development consultants.

Everyone who regularly travels to China notes how genuinely important these Games are to the average Chinese citizen, not to mention the government. The notion of spoiling the Olympics doesn’t make sense to them.

“Back 20 years ago, when I was in China, human rights might be a big issue,” said Hua Sun, a partner in USS International Group, a Plymouth-based business development consultant. “But nowadays people’s lives are getting better and better.”

As to why a boycott of these Games never generated much energy, Hua said, “If somebody wants to boycott the Olympics, compare the events. Hitler and the Russian invasion of Afghanistan. What is the comparison here? I do not see anything that can be compared to invading Afghanistan and the start of World War II.”

Olympic demonstrations
Supporters of Dream for Darfur might beg to differ, but they never pondered a boycott. It is this commitment to not stay away that has given her organization more power and influence, not less.

“People don’t want to boycott the Olympics,” said Savitt. “It sends the exact wrong message that we want to send. We believe in any international forum in which countries do battle without violence. We support the whole concept of peace and international cooperation. We would never want to hurt the Olympics. We think China is the one hurting the Olympics by hosting and sponsoring both an Olympics and a genocide at the same time. That means the Olympic spirit and ideal is quite hollow.”

As ‘U’ human rights advocate Frey said: “The Olympics have a ‘we are the world’ sort of feel to them. The Olympics are intended to be a response to world problems and are intended to build goodwill. By boycotting an Olympics, you’re kind of undercutting the sentiment that you’re ultimately trying to build.”

Since June, 2007, Savitt has met with the Chinese ambassador to the United States once and with a New York-based Chinese representative four times. Actress Mia Farrow has been the celebrity face and voice of the movement. The Chinese have taken the Dream for Darfur campaign so seriously, they have posted a response to the organization on Dream for Darfur’s own Web site.

“The only thing they might love more than their access to cheap oil [in Sudan] is the successful staging of the Olympics,” Savitt said.

Speaking of which, Dream for Darfur has been pressuring filmmaker Steven Spielberg to cut his ties with the Beijing Organizing Committee. In 2006, he signed on as an artistic director for the Games’ Opening and Closing Ceremonies. But as the Darfur crisis deepened, Spielberg, who directed the Holocaust film “Schindler’s List” and “Munich,” about the 1972 Olympic murders, came under fire for his Beijing ties. Just last week, Mia Farrow called on him again to step down. So far, he’s written letters to Chinese leaders condemning their role in Darfur, but he’s still an adviser to the Beijing committee.

Dream for Darfur is planning protests when the Olympic Torch Relay tours the world. They are confronting corporate sponsors of the Games and asking TV viewers to turn off their sets during the commercials from Beijing. Farrow will post a daily Internet report from a Darfur refugee camp in August during the Olympics.

Savitt wouldn’t offer details, but actions are planned for Beijing. Thousands of journalists will be there and hundreds of thousands of tourists. Billions in the world will be watching electronically.

Clearly, the politics of these 21st century Olympics will belong to those who show up.

Beijing Olympics likely to be the most corporate, most political and most examined sports event in history