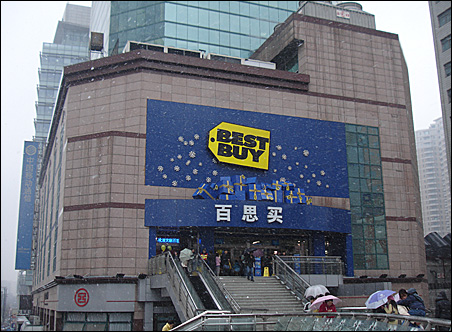 MinnPost photo by Adam Minter
After less than a year of operation, Best Buy’s first store in China — in Shanghai — is among the top-10 revenue generators of the company’s 1,300 stores.

SHANGHAI, CHINA—”This is about our customer’s needs,” says Boyd Westover, standing in front of nine students in a 33rd-floor classroom overlooking Shanghai’s high-rise cityscape. “Not about ours.”

It’s the first day of classes at Best Buy University, and the nine students who will take over management at the Minnesota retailer’s second Chinese store are learning to adapt to a service-oriented retail culture foreign to China’s thriving price-sensitive, commission-based electronics and appliance retail sector. Westover, Best Buy’s director of international training, doesn’t waste time in defying the expectations of his students, all of whom have worked at traditional Chinese retailers. Over the next 45 minutes he introduces what he describes as a leadership lens shift and outlines a handful of lifestyle groups.

“You’ll learn how to identify them,” he says as the students dutifully copy his words into their notebooks. “And honor their differences as individuals.”

At this, two students look up quizzically. Later, during a break, Westover admits the scale of the challenge. “We’ve been here a year and a half, and we’re still training,” he notes. “It’s an ongoing process.”

Richfield-based Best Buy, North America’s largest electronics retailer, and long one of Minnesota’s largest employers and publicly held companies, is at a global crossroads. Revenue and profitability remain strong, but if the company hopes to sustain the blistering growth rates that have characterized it since 1966 and its founding in a St. Paul strip mall, then China and other international markets are going to be key.

“Our shareholders expect growth,” says Bob Willett, CEO of Best Buy International. “So the international strategy is designed to bring it to them.”

Promising results
In 2001, the company inaugurated its international operations with the acquisition of China’s Future Shop, and today it operates more than 160 Canadian Future Shop and Best Buy stores. But Canada is a developed economy, and the real growth in consumer electronics and appliances over the next decade will come from developing countries where emerging middle classes seek middle-class comforts. Thus, Turkey and Mexico will receive their first Best Buy stores in 2008; China, potentially the company’s biggest market over the long-term, will receive its second store this week, and – likely – a handful more over the next year.

So far, the early results are promising. After less than a year of operation, Best Buy’s first China store, also in Shanghai, is one of the top-10 revenue generators amongst the company’s 1,300 stores, with profits far exceeding company expectations, according to Willett. 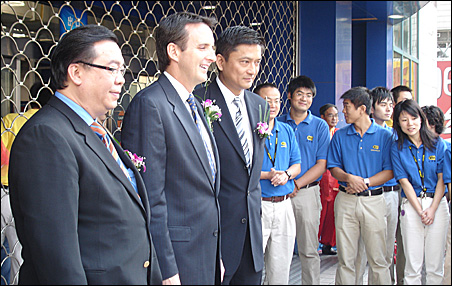 Still, with only one branded store in China (in addition to 145 Jiangsu Five Star electronics stores in which the company acquired a majority interest in 2006), time is short for North America’s largest specialty retailer. Lu Weimin, the chairman of Best Buy China, recently resigned for “personal reasons” amidst rumors that the company was unhappy with its slow growth in the Middle Kingdom.

And there is reason to worry: Gome, China’s leading electronics and home appliance retailer operates more than 580 stores in 160 Chinese cities. Where Gome hasn’t set up shop, copycats and electronics malls have, almost all following the Gome model of hosting vendor-operated stalls selling on commission. Before Best Buy opened its first Chinese store in December 2006, this traditional Chinese retailing model had gone largely unchallenged. Price — not service or shopping environment — distinguished the competition. But thanks to training programs that differ little from those offered at North American Best Buy stores, that is changing.

No aggressive sales techniques
On a recent afternoon, Best Buy’s signature “blue shirt” salespeople outnumbered the handful of customers in the company’s four-story, 87,000-square-foot Shanghai store. Yet even outnumbered, customers had space to browse and try out products without the aggressive sales techniques practiced at Gome and other local retailers. At the same time, customer service is available with the wave of a hand.

One of the few customers in the mobile phone section was “Vivienne” Shen, a 26-year-old Beijing transplant, who said she liked to stop into the store during her lunch breaks. “There’s no pressure if I just want to look,” she explains, as she toys with a $300 phone. “They let me enjoy myself.”

Downstairs at the technical service department, the Geek Squad (as they’re known at Best Buy) was busy upgrading and configuring newly purchased computers for customers. One customer, a college student awaiting a memory upgrade, smiled when asked why she was having the operation done at Best Buy when it could be done more cheaply down the street. 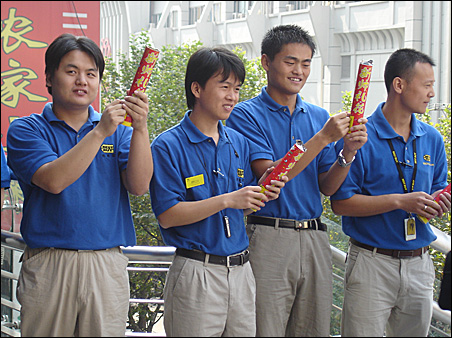 “I like leaving there,” she says of the crowded electronics mall nearby. “They’re too pushy.”

“We’ve become a service company in North America, and that’s what we’re doing in China, too,” says Willett. “Generally, though, you don’t have a lot of natural homegrown talent in China that knows how to do it. So we’ve had to create it ourselves.”

How Best Buy creates that management talent is still a work in progress, but over the last 18 months the model — on the basis of one store, at least — is beginning to attract and retain customers. According to exit interviews conducted by Best Buy in June, 62 percent of visitors have come to the store at least three times. At the same time, employee-retention rates, which the company believes are closely related to customer-satisfaction rates, exceed those in the United States, according to Redmond Yeung, President and Chief Operating Officer of Best Buy Asia.

Role playing
Westover’s management trainees will undergo extensive role playing during their four days at Best Buy U. They alternate playing customer and blue shirt with a coach seated between them. The blue shirt is tasked with quickly assessing which of four lifestyle categories the customer belongs to and how well that information is used to recommend and highlight products. Throughout, the coach interrupts to prod, encourage, and re-set. He also reminds them to sell extended-service plans, a concept Best Buy has introduced in China, and which, the company says, has done better than expected.

“Now everyone is copying us in doing them,” Westover tells his class.

During a break in class, Westover explains to me that the hardest lesson has nothing to do with a specific product but instead come down to cultural barriers. “In Chinese retail, they’re used to being responsible for sales performance. And that’s it.”

“Golden” Zhou Gang, a 33-year-old native of Shanghai tapped to be the GM of Shanghai’s second Best Buy store, was hired away from Lotus Supercenters, a nationwide chain of hypermarkets, where he was a district manager in charge of 6,000 employees.

“Lotus is a traditional retailer where you show up with a notebook and listen,” he says in the Magnolia Home Theater section of the Shanghai store. “So the people like me, from these companies, we’re a bit more reserved and used to doing what we’re told.”

Retail Boot Camp
Sitting across from Golden, “Jacky” Leung Xigang, a Customer Service Experience Manager at the first Shanghai Best Buy, agrees. At his previous employer, PC Mall (not associated with the U.S. company of the same name), Leung was responsible for the “military-style” training of his store’s staff.

“We stayed in barracks, learned how to march, how to take orders and perform” he laughs.

Leung joined Best Buy in 2006, and was soon sent — along with 30 other future managers — to corporate headquarters in Minnesota for a 40-day intensive crash course in modern retail that — depending upon who is asked — was called “Retail Boot Camp,”  or “Shaolin,” after the famed Chinese Kungfu academy. 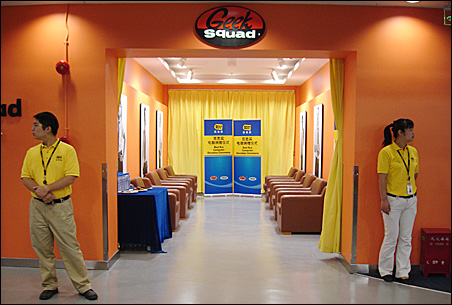 Whatever the name, the course covered “P&L, merchandising, stores design, supply chain, customer relations — everything about modern retail” as well as in-store training in the United States. Unlike training at China’s PC Mall, Best Buy’s Boot Camp was intense, but also fun and interactive. Team-building activities were usually games and ice-breakers that have carried-over into the morning “chalk talk” meetings that open Best Buy Shanghai store.

“It really changed my understanding of management,” Jacky Leung notes. “I figured out that if I can keep my staff happy instead of scared, they’ll sell better.” For example, at a recent chalk talk attended by several of the second store managers, the 100 employees were organized into group games before being briefed on loss prevention strategies.

International CEO Willett makes no excuses for what he characterizes as Best Buy’s late entry into the China market, nor does he pretend that the company has all of the answers it needs.

“We’re still in the fumbling-around stage,” he concedes. “We’re still figuring out how customer-centricity works in China.”

But the slow rate of store openings is a concern for the company which acknowledges being well-behind its store-opening targets. The high cost and availability of real estate is one problem. Human resources are another. The opening of the first store was delayed to allow more time for —  among other items — employee training.

Adam Minter is an American writer in Shanghai, China, where he covers a range of topics, including religion in contemporary China, the Chinese environment, and cross-cultural issues between the West and Asia. He can be reached through his blog, Shanghai Scrap.