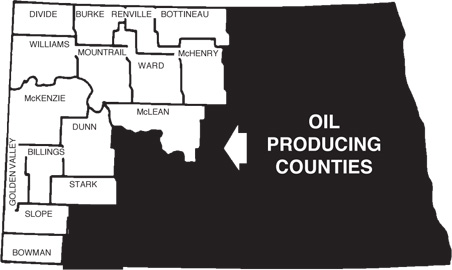 PARSHALL, N.D. — Landing lights for a long, remote runway. Christmas decorations left on all day, all night, all year. The scattered campfires of a large invading army that shows no sign of withdrawing anytime soon.

Pick your metaphor for the landmark flares brightening the winter night over a broad expanse of western North Dakota rangeland.

Thanks to record prices for oil and new technology that allows for easier extraction, the state’s oil patch is booming again, creating riches for farmers, ranchers, retirees and speculators lucky or smart enough to own mineral rights in the Bakken Formation, a vast oil deposit stretching from the Dakotas into Montana and Canada.

Nearly 60 drilling rigs are operating in western North Dakota now, the most since the last oil boom in the early 1980s, leaving the horizon littered in all directions with new wells marked by the bright, noisy flaring of escaping natural gas being burned off.

Rancher Herb Geving, 74, can see dozens of new oil wells from his property just outside Parshall, the bright red-orange gas flares whooshing into the sky. Two of the wells are his — pumping his oil — and promise to make him a millionaire within months.

“I love to come out here and watch it, to be a part of it,” said Geving, who often rides out alone in his ranch pickup on a starry night just to stare into the flaring gas.

“It’s like a Christmas tree out here,” he said, as cheery as a boy who knows he’s been good. A child of the Depression, Geving supplemented his ranch income for decades by hauling garbage and operating a landfill, but he quit the garbage business and closed the landfill the day people from an oil company said they wanted to drill there.

He is reluctant to put numbers on his new wealth, but he tells of a neighbor who received a check for more than $500,000, lease and royalty payments after four months of oil production on his land. Another man with mineral rights on the nearby Fort Berthold Indian Reservation recently showed off a check for $130,000, he said.

“Mine was the first here, but there’s about six wells to the west now, and to the east another six, and they’re going in to the south and to the north,” Geving said. “This whole area is just booming. I never thought I’d see it stretch out over so many farms and ranches.

“The money is starting to flow,” he said, smiling. “Going to be a lot of millionaires around here.”

In the first month of 2008, the state issued 90 drilling permits. At that pace, permits for the year will more than double the numbers for 2007.

“It doesn’t look like anything is going to slow them up,” said state Rep. Kenton Onstad, a Democrat from Parshall. “I think there are 17 rigs working in Mountrail County alone, and we hear that more are coming.

Since oil was first discovered near Tioga, N.D., in 1951, North Dakota has never challenged the big oil states. In 2005, Louisiana produced 1,463,000 barrels a day and Texas 1,331,000 to North Dakota’s daily rate of 91,000 barrels, according to the online industry monitor Gibson Consulting.

But Louisiana’s production was down 1.6 percent that year and Texas was down 6.7 percent, while North Dakota’s daily figure was up 12.3 percent over 2004 — and has continued to grow rapidly.

With bumper crops of wheat and other commodities bringing record prices to match the oil boom, North Dakota is enjoying “the most robust economy I’ve seen” in 22 years, said Kathryn Strombeck, a research analyst with the state Tax Department. Through December, state general fund revenues — primarily income and sales taxes — were running well ahead of the last biennium, she said, building a budget surplus that will be the envy of many other states.

“We’re producing both oil and agricultural commodities and riding big waves (high yields and high prices) in both of those,” Strombeck said.

“And maybe because we’re more conservative here, we didn’t get into the subprime mortgages that are causing problems in most other states.” 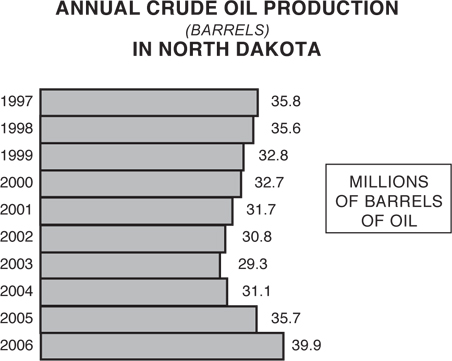 Dusty country roads are reeling under heavy traffic by oilfield trucks and other heavy equipment. Despite the bleak national economic outlook, there is optimism on Main Street throughout the North Dakota oil patch.

“Folks aren’t running down the street giddy,” said Gary Petersen, a banker in New Town, N.D., about 10 miles west of Parshall and the Mountrail County seat. “That’s not the nature of people here. But there sure has been a lot of leasing activity and lots of reports of successful wells.”

According to a recent study by researchers at North Dakota State University in Fargo,  an active oil well is worth about $11.5 million annually to the state’s economy. In all, oil exploration and production and secondary economic impact resulted in a gross business volume of $3.9 billion in 2005, according to the study — more than the annual business volume attributed to wheat farming, since statehood the dominant component of North Dakota’s economy.

Not everybody is happy
Ruth Zacher, 44, teaches in Parshall and lives with her husband, Chris, and three children on a small-grains farm three miles northwest of town. She said she regrets some of the boom’s impact on the land and a cherished way of life. The Zachers do not own the mineral rights on their land, so they profit little from drilling — several rigs are operating on their property now, she said — and they will earn no royalties from the wells. But their unhappiness does not reflect resentment, Ruth Zacher said.

“We live about a mile from Herb Geving,” she said. “He’s a good friend. I say, ‘Good for Herb,’ and I’m happy for others who have oil. Friendship is deeper than an oil well.

“But it’s not all roses, what’s happening out here. I used to wake up in the middle of the night if I heard a car a mile away. Now I worry about coming to the top of one of our hills and clipping a semi or a water truck.

“We once had an endless, beautiful view of the rolling prairie. You have favorite spots you go to with your kids, favorite hunting and running spots, but now there are power lines and equipment and activity. I look out my windows and I feel like I’m being invaded. With the flares, it looks like the countryside is on fire.”

Zacher said she hopes some of the new money — oilfield wages and other spending, as well as lease and royalty checks — will help to revitalize Parshall, a town of about 1,000 people just inside the Fort Berthold reservation boundary. About half the town’s population is American Indian, and the 2000 census put the median household income at $24,000. Cafes and other businesses have had trouble keeping their doors open.

The average wage in the oil industry is about $62,000, double the state average, according to the North Dakota Petroleum Council, an industry association. Royalty and lease payments in the state totaled $282 million in 2005 and could be close to a third higher now. 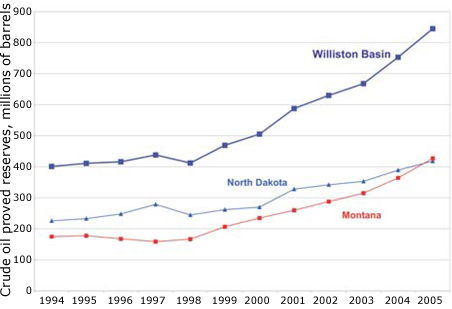 “I hope we end up with improved schools,” Zacher said. “Right now, we teachers and parents waste a lot of our time trying to raise money with bake sales and such.”

The Mandan, Hidatsa and Arikara Nation has nearly completed the permitting process for a $250 million oil refinery on the Fort Berthold Reservation. If approved, the 15,000-barrel-a-day facility would be the first refinery built in the United States in more than 40 years.

Tim Mathern, a Democratic-Nonpartisan League state senator from Fargo and a candidate for governor, has proposed building a state-owned refinery to relieve persistent gas shortages and high prices in the state, especially troublesome during growing season.

Onstad, the legislator from Parshall, organized a task force to study the idea, which has precedents here. The state-owned Bank of North Dakota in Bismarck and Mill and Elevator in Grand Forks were established in the 1920s after the old Nonpartisan League (since merged with the Democrats) briefly took control of state government and sought to protect the state from Twin Cities railroad and milling interests. Each institution still sends its profits into the state general fund.

The state’s only existing oil refinery, a private facility built in Mandan in 1954 and owned now by Tesoro Corp., is operating at near-record levels. About half of the refinery’s production, including about 35 percent of the gasoline, remains in the state, the Associated Press has reported.

“We’ve had a great response from the public” to the idea of a new refinery, Onstad said last week. In addition to producing more gas and other fuels locally, construction and operation of a refinery would mean hundreds of new jobs and good paychecks.

“I don’t know if the state’s going to want to own this thing,” Onstad said. “Maybe we could be a part owner, or we could help get a private operation started.

“But we have this oil in our backyard, and people want to know why we’re paying some of the highest prices in the nation for gas.”

Chuck Haga, a Star Tribune staff writer from 1987 to 2007, is a reporter for the Grand Forks Herald. He can be reached at chaga [at] minnpost [dot] com.