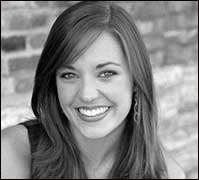 We saw her at Chanhassen, then we saw her on television, and some even saw her on Broadway. On Monday, we can see her in Maplewood. Laura Osnes, winner of last year’s TV reality show “Grease: You’re the One That I Want,” returns home to the Twin Cities on Monday to sing Broadway tunes at the Maplewood Community Center.

Produced by Ashland Productions, the Osnes appearance is a homecoming for the Eagan High School graduate who did lots of community theater around the Twin Cities before hitting it big.

Winning on the television show got her the female lead of Sandy in the Broadway revival of “Grease,” which opened in New York last summer. Monday night is her day off at the Brooks Atkinson Theatre.

From Chanhassen Sandy to Broadway Sandy
Osnes, who was playing Sandy in the Chanhassen Dinner Theater production before trying out for the television show, is no newcomer to Ashland. She appeared in the company’s 1999 Big Band Variety Show and in its 2002 production of “The Wizard of Oz.” She played Dorothy.

Osnes will perform in New York Sunday evening, fly here Monday morning, perform in Maplewood, then fly back to New York Tuesday morning to be ready for a Tuesday night performance there.

She’s been home only once since starting the Broadway gig, so it’s a good chance for her to see her family, said Peg Sutherland of Ashland Productions.

Osnes will sing the big “Grease” showstopper: “Hopelessly Devoted to You,” as well as many other Broadway tunes. She’s big on “Thoroughly Modern Millie,” so expect some songs from that show. She’ll be joined on stage by local singers — Katie Allen and Ben Bakken, who starred in the Children’s Theatre Company production of “High School Musical” — as well as some members of the Ashland youth program.

Asenbrenner suffered a stroke two years ago and retired from active participation in the program, but he is still an enthusiastic fan, Peg said. Rob Sutherland hopes to expand the Broadway series with other performers from New York, so the Osnes appearance is a bit of a test.

“Broadway is dark on Monday nights, so we hope to find other performers who can come in for us,” he said.

They are paying an unspecified amount to Osnes. “While it’s a lot of money for us, I think she’s doing us a big favor [with the fee], because we have a relationship with her and because she’s a generous person.

“Even when she worked with us when she was very young, and even then you could see what an incredible kid she was, so genuine and with a great relationship with her family.”