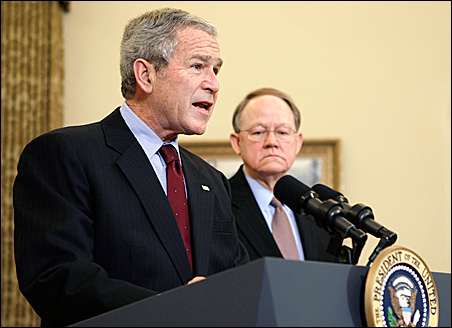 REUTERS/Kevin Lamarque
President Bush lobbied hard Wednesday in support of a Senate bill that would grant retroactive immunity to telecom companies that took part in his warrantless eavesdropping program. He was accompanied by Mike McConnell, director of national intelligence.

President Bush’s use of America’s top bully pulpit worked Wednesday: House leaders couldn’t wrangle enough votes to extend negotiations with the Senate on U.S. government surveillance. The Senate’s bill, passed on Tuesday, would expand government spying power for six years; it also would grant immunity to telecommunications companies that cooperated with the secret warrantless spying program that Bush put into place after the Sept. 11 attacks.

“Rather than wait for the House and Senate to negotiate differences in their versions of the intelligence legislation, Bush wants a rubber stamp of the Senate bill so he can sign it into law immediately,” the Associated Press reported.

“The current law expires at midnight Saturday, and Bush said he wouldn’t approve another extension. The House wouldn’t either — Republicans led a 229-191 vote turning down a 21-day extension.”

Bush says delays threaten terrorism fight
Before that vote, Bush played national-security hardball in arguing for an end to discussions and quick approval of the Senate bill, implying that to do otherwise would seriously undercut efforts to fight terrorism. “At this moment, somewhere in the world, terrorists are planning new attacks on our country,” he said. “Their goal is to bring destruction to our shores that will make September the 11th pale by comparison.”

Actually, the New York Times reported, “The lapsing of the deadline would have little practical effect on intelligence gathering. Intelligence officials would be able to intercept communications from Qaeda members or other identified terrorist groups for a year after the initial eavesdropping authorization for that particular group. If a new terrorist group is identified after Saturday, intelligence officials would not be able to use the broadened eavesdropping authority. They would be able to seek a warrant under the more restrictive standards in place for three decades through the Foreign Intelligence Surveillance Act.”

The key point of contention between the Senate and House is the granting of immunity to telecom companies, which face some 40 lawsuits claiming civil-rights violations stemming from their cooperation with Bush’s program. “The two sides had battled to balance civil liberties with the need to conduct surveillance on potential adversaries,” the AP reported.

“Constitutional lawyer Jonathan Turley criticized the Senate for bowing to President Bush’s demands,” wrote David Edwards and Nick Juliano of rawstory.com: “The fix has been in for some time on the unlawful surveillance program and the torture program. Many Democrats and Republicans were aware of the program and they are actively helping the White House to try to shut down any confrontation on the issue. This is also helped by the fact the telecoms are one of the five most powerful lobbying forces in Washington, and many of these members have close ties to those lobbyists.”

Senate, administration disagree on some aspects of bill
But though the Senate agreed with Bush on the need to protect telecoms from lawsuits, it wasn’t in league with the administration on some other aspects of the bill. As the AP put it, “While giving the White House what it wanted on immunity for the phone companies, the Senate also expanded the power of the court to oversee government eavesdropping on Americans. An amendment would give the FISA court the authority to monitor whether the government is complying with procedures designed to protect the privacy of innocent Americans whose telephone or computer communications are captured during surveillance of a foreign target.

“The Senate bill would also require FISA court orders to eavesdrop on Americans who are overseas. Under current law, the government can wiretap or search the possessions of anyone outside the United States — even a soldier serving overseas — without court permission if it believes the person may be a foreign agent.”

As the week nears closure, House leaders must decide whether to sign on to the Senate’s bill. Instead, said the Times, “House Democrats now say they may simply let the deadline pass without acting on the Senate plan.”