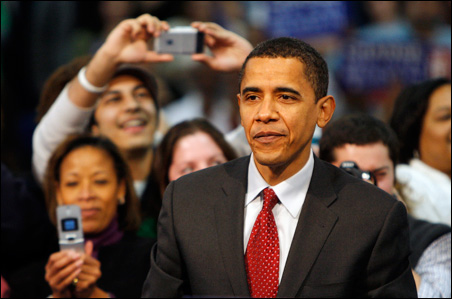 REUTERS/Carlos Barria
Barack Obama at a rally in Alexandria, Va., Sunday. Obama remains a pleasing enigma to many Americans, but he still must survive a nine-month gantlet if he is to win the White House.

We come here not to praise Barack Obama, but not to bury him, either. By blitzing Hillary Rodham Clinton in all four weekend presidential contests, Obama has become the Democratic front-runner, at least when you look at pledged delegates. Clinton, who fired her campaign manager over the weekend, has done a crummy job of bringing her soaring opponent down to Earth, largely because of her own leaden vote for the Iraq War and general strangulation-by-triangulation.

But just because Clinton can’t redefine Obama as just another politician doesn’t mean someone won’t. While he currently wins trial heats with near-certain Republican nominee John McCain, Obama remains a pleasing enigma to many Americans. While he’s a more nimble target for the GOP war machine or media skeptics, he could fall faster if either lays a glove on him.

During the past week, several news stories — some, no doubt, inspired by Clintonistas — painted a harsher or at least more callow picture of the Illinois senator. What follows is not a plea for buyer’s remorse, if you were a Minnesotan so inclined on Super Tuesday. (After all, some flawed individual has to become president.) If nothing else, it’s a test of belief, an early stage of the nine-month gantlet Obama still must survive if he is to win the White House.

Low-income energy assistance a low priority
According to weekend news reports, there is “a greater than 50 percent chance” John Edwards will endorse Clinton or Obama. Assuming the “use by” date of that endorsement hasn’t passed, Obama’s forces may want to keep the Son of a Millworker away from certain Maine newspapers. The Low Income Home Energy Assistance Program (LIHEAP) is an Edwards favorite; the poor have been battered by soaring energy prices amid a cold winter and assistance funds haven’t kept up in many states, including Maine.

On paper, Obama supports a $1 billion infusion into LIHEAP, but when the chance came to add the money to the recent economic stimulus bill, Obama’s top economic advisor Austan Goolsbee openly opposed the idea. Goolsbee called LIHEAP “a bureaucratic program … that would take a long time.” However, Jonathan E. Kaplan, the Washington correspondent of the Portland Press Herald, noted that “LIHEAP funding can get to those who already have qualified for the program quickly — additional funding released by the Bush administration on Jan. 17 was dispersed to Maine families by Jan. 22.”

Tax rebates — Obama’s and Goolsbee’s favored methods of stimulus — haven’t even started going out yet. Meanwhile, the best shot at hiking LIHEAP grants to match energy-price inflation may have passed.

The pitfalls of fundraising
Obama doesn’t take money from political action committees and federally registered lobbyists, a key point of differentiation with Clinton. But while he doesn’t take money from their hirelings, he does take contributions from the business people themselves. That opens him up to stories like the one in The New York Times detailing Obama’s actions toward the nuclear industry.

In 2006, after radioactive tritium was discovered in Illinois drinking water, the senator sponsored a bill requiring plant operators to disclose even small leaks from their plants, instead of just emergency levels, as existing law required. According to the Times, millions of gallons of water containing tritium had leaked from an Exelon nuclear plant years earlier but went unreported because levels did not meet the legal reporting standard.

Eventually, however, Obama rewrote the bill so that mandatory reporting became voluntary — and therefore toothless, anti-nuke activists say. Obama’s campaign blames the implacable opposition of global-warming denier and nuclear-industry stalwart Sen. James Inhofe, R-Okla. Still, on the stump, Obama has touted his sponsorship of the original bill — not the end result — and at least once claimed the tougher bill passed. (Even the weaker bill died at the end of the 2006 session.)

More damningly, the Times notes that Obama has accepted at least $227,000 from Exelon officials for his 2004 U.S. Senate and 2008 presidential campaign. Two plant officials are among his biggest fundraisers, and his top political consultant, David Axelrod, has been an Exelon consultant on non-nuclear matters.

The Chicago Tribune sounds a similar theme in a story headlined “Obama’s fundraising collides with rhetoric.” The piece contrasts Obama’s jeremiad on behalf of “the Maytag worker who is now competing with his own teenager for a $7-an-hour job at Wal-Mart because the factory he gave his life to shut its doors,” with one of his campaign fundraisers —  a major Maytag investor and company director.

Although the Tribune story showcases the contradictions of advocacy and fundraising, it’s nowhere near as strong as the Times effort. For example, the plant closed before Obama ascended to the U.S. Senate, and it was not in his then-legislative district. Also, the plant’s union never asked Obama for help.

Still, stories such as these are the thin edge of the wedge that could open gaps in Obama’s image in the rough campaign months to come.