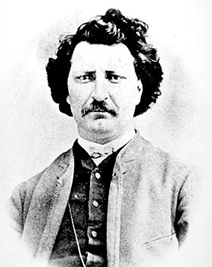 The rehabilitation of Louis Riel may now be considered complete. The Métis leader, convicted of treason and hanged in 1885 by the province of Saskatchewan, now has a provincial holiday in his name in Manitoba.

The inaugural Louis Riel Day is Feb. 18 providing Manitobans with a midwinter three-day weekend and another excuse to cross the border with their strong “loonies” for a U.S. spending spree.

The provincial government authorized the holiday last year after a media campaign arguing that Manitobans deserved a three-day weekend to break up the long, unhappy stretch between Christmas and Easter.

“Dozens of Manitobans already have booked hotel rooms in Grand Forks [N.D.] and Fargo [N.D.] to take advantage of the extra day for shopping or relaxing,” the Winnipeg Free Press reported last weekend. “Near Thief River Falls [Minn.], at the 7 Clans Casino and Waterpark, no rooms are available that Saturday and Sunday, a spokesperson said.”

Leader of the Métis
The Métis are descendants of intermarriage between Ojibwe, Cree and other native people with French Canadians and other white immigrants primarily in the Canadian prairie provinces, with some descendants also in northwestern Minnesota, North Dakota and Montana.

Riel, born in 1844 in the Red River Settlement — now Manitoba — led two resistance movements against the encroaching Canadian federal government, hoping to preserve the culture and rights of his French-speaking people. In the Red River Rebellion of 1869-70, he led a provisional government that eventually resulted in the establishment of the province of Manitoba and its negotiated entry into the Canadian confederation. For that, he has often been called the father of Manitoba.

But during the rebellion, Riel had a part in the controversial execution of an English-speaking man, Thomas Scott, and he was forced to flee to the United States. During his exile, he was elected three times to the Canadian House of Commons, but he was unable to take his seat.

In 1885, again involved in a resistance movement — the Northwest Rebellion in Saskatchewan — Riel was tried by the provincial government for high treason and executed.

“Even after a century, Riel and his fate excite political debate, particularly in Québec and Manitoba,” where he has been celebrated as a defender of French culture, according to an entry in the Canadian Encyclopedia.

Riel’s place in history
Debate over Riel’s proper place in Canadian history has extended to how, where and even whether he should be depicted in public. Despite the treason conviction and his execution by provincial authorities, Saskatchewan raised a statue of Riel in 1968 in Regina, the provincial capital. Two years later, Manitoba held a public competition for a statue. The winning design was of  “a twisted nude sculpture of Riel wearing a tortured expression, his hands behind his back,” according to an archived CBC report. The sculpture was unveiled on Dec. 31, 1971, embraced by two curved walls with engraved quotations by the province’s “founding father.”

Both provincial homages to Riel received mixed reviews from the public, Métis and non-Métis alike, and the Regina statue was removed in 1991. Three years later, the Manitoba nude sculpture was moved from its place of prominence at the provincial legislature to the grounds of St. Boniface College in Winnipeg.

But in 1996, a new statue of the Métis leader — clothed this time, with a more dignified expression and bearing — was installed near where the nude had stood on the legislative grounds, opposite a statue of Queen Victoria.

And now, on Feb. 18 — coincidentally, Presidents’ Day in the United States — Louis Riel will have his day.