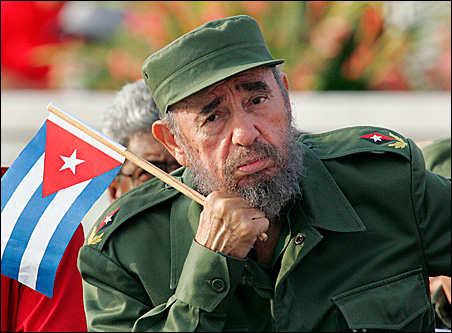 REUTERS/Claudia Daut
Cuban President Fidel Castro at a May Day event in 2005 in Havana.

Fidel Castro’s resignation announcement today quickly spurred expressions of hope for change, along with hints from Europeans of a prospective thaw in relations.

In answer to a question about U.S.-Cuba relations, President Bush punted, saying during a news conference in Rwanda, “The question really should be what does this mean for the people in Cuba? They’re the ones who suffered under Fidel Castro,” the New York Times reported.

“They’re the ones who were put in prison because of their beliefs,” Bush said. “They’re the ones who have been denied a right to live in a free society. So I view this as a period of transition and it should be the beginning of a democratic transition in Cuba.” The president also said Castro’s resignation should lead to “a period of democratic transition” for Cuba. Calling for free and fair elections, Bush said, “And I mean free and I mean fair, not these kind of staged elections that the Castro brothers try to foist off as true democracy.”

EU diplomats hopeful
European Union representatives immediately expressed their hopes for a transition toward a pluralist democracy, respect for human rights and an improvement in living standards, saying they were “ready to seek ways to re-launch diplomatic contacts with Cuba that were frozen after Havana arrested 75 dissidents in 2003,” Reuters reported.

“We reiterate our willingness to engage with Cuba in a constructive dialogue,” a spokesman for EU Aid Commissioner Louis Michel told Reuters, which reported that Michel plans to visit Cuba on March 6-7.

Under the temporary leadership of Fidel’s brother Raúl, the Economist reported, “Cuba has edged cautiously towards economic reform. Raúl, who has long been the defence minister and vice-president, heads a collective leadership. Last year he launched an ‘open debate’ on the shortcomings of the communist economy, saying that it needed ‘structural and conceptual reforms.’ ”

The London news magazine added, “So far these have involved only modest steps, such as turning more state land over to individual farming and official recognition that foreign investors can pay higher wages. Some Cuban economists expect that in the coming months the government will grant more scope for family businesses and foreign investment, and allow state companies more autonomy. …

“Under Raúl, there have also been a few signs of a modest relaxation in Cuba’s police state. In the past few days, four political opponents were released from long jail terms and flown abroad. But human-rights activists say that there are still more than 200 political prisoners in the island’s jails.”

Despite some improvements in, for example, the delivery of power to Cuban homes, the Economist said, Cubans remain “deeply discontented with their daily lives. Top of the list of grumbles are low wages (averaging only about $20-25 a month), acute shortages of transport and housing and the restrictions on small business. Health care and education remain free but of deteriorating quality. To get by, almost every Cuban must get involved in a tolerated, but officially illegal, informal economy.”

For now, the New York Times reported, it’s uncertain how the changes will affect Cuban governance. “The announcement puts Raúl Castro in position to be anointed as the Cuban head of state when the National Assembly meets on Sunday, cementing the power structure that has run the country since Mr. Castro fell ill,” the Times said. “However, Mr. Castro’s unexpected announcement left it unclear what role other high-level government ministers — among them the vice president, Carlos Lage Davila, and the foreign minister, Felipe Perez Roque — would play in the new government.”

Castro’s announcement also left open future involvement in Cuban life, the Times noted. “I am not saying goodbye to you,” he wrote. “I only wish to fight as a soldier of ideas.”

Susan Albright, a managing editor at MinnPost, can be reached at salbright [at] minnpost [dot] com.