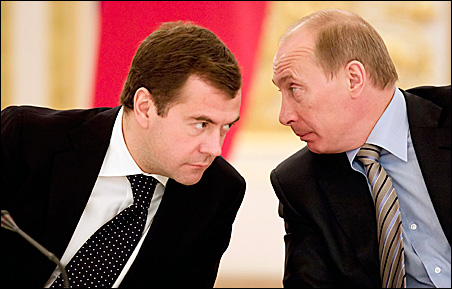 Remember just a few years ago when Americans assumed that Russia’s new and buoyant democracy would bring free and competitive elections?

Never happened. The new Russia has reverted to the one-party domination of the bad old Soviet days. Sunday’s national election holds no suspense whatsoever, justifying the age-old assumption that Russians value stability above all else.

No one is betting against Dmitry Medvedev for president. He’s Vladimir Putin’s hand-picked successor. And no one’s betting against Putin emerging as prime minister, which pretty much makes him the ventriloquist and Medvedev the dummy.

Europe’s leading election watchdog organization gave up its plans to monitor the voting, citing a lack of cooperation from Russian authorities. The Kremlin described the group, the Organization for Security and Cooperation in Europe, as a stooge of United States interests.

No debating for Medvedev
Russia’s campaigning doesn’t much resemble the Western style. Medvedev, of the overwhelmingly dominant United Russia party, has not been debating his three opponents, two of whom are thought to be Kremlin allies who are merely filling out the ballot.

Kosovo’s recent declaration of independence from Serbia, Russia’s closest European ally, has given Medvedev a fresh excuse to lash out at the West while out on the campaign trail. “Europe could go ablaze,” he said at one stop on Wednesday. That’s red meat for a Russian electorate that seems happy to return to the old suspicions and paranoia.

The BBC recently summarized the country’s darkening mood this way: The network’s Moscow correspondent was meeting with Foreign Minister Sergei Lavrov, an urbane man who speaks beautiful French and English and lived for 15 years in New York. Surely he’d be no xenophobe.

Wrong. He sounded as if the Cold War had never ended. The United States was busy surrounding Russia, he said. Poland and the Baltic countries had fallen, he said, sounding like an adherent to the domino theory. Georgia would be next. The United States was plotting to put missile bases (remember Cuba?) in Poland and the Czech Republic as part of a strategy to encircle Russia.

“What is clear is that Russia is in a deep funk about its position in the world,” the BBC said. “It is a huge country with an equally large inferiority complex. In the 1990s, it lost an empire, and with it, the respect and prestige it feels it deserves. It blames the West and particularly America and Britain.”

A lost opportunity
The radio report quoted the last remaining MP from one of the pro-democracy liberal parties lost his seat in parliament. “In the 1990s we had the opportunity to turn Russia outwards toward the West, but we failed,” he said. “Now it’s gone and it won’t be back for at least a generation.”

The Moscow Times offers quite a different view of Russia’s mood. In a recent appraisal of Putin’s legacy, the paper painted a Russia that had moved from a “battered” economy to “an island of stability.” Putin was lucky to have taken office in 1999 when times were so hard that the only way was up, the Times said. The foundations of economic growth were forged in the chaotic ’90s, by the emerging private sector. Putin nationalized much of that sector during his second term, adding the feeling of stability to an astonishing rate of economic growth that has exceeded 7 percent per year.

“Russia has paid down its foreign debt, boasts the world’s third-largest foreign currency reserves, has built up a huge reserve fund to guard against another crisis, and Russians — from the richest to the poorest — are now materially batter off,” the paper noted. The largely state-run economy seems especially secure at a time of turmoil and fear in the Western financial markets.

Putin’s heavy hand has fallen a bit more lightly on the arts and culture. So that may be a new area of concentration after Medvedev’s election. According to the New York Times, “Some prominent artists and writers, cognizant of a long, dark history of repression that Russians know only too well, and especially wary of the grip the [Orthodox] church is gaining on the state, have been expressing deep anxiety about the government’s starting to encroach on artistic freedom the way it has taken on other aspects of society.”

Putin and his allies have employed repressive tactics to gain a foothold on power. But there’s a general consensus that the public is more than willing to go along. In that sense, selecting United Russia candidates — including Medvedev — constitutes a free choice. Well, sort of.

Steve Berg, a former Washington Bureau reporter, national correspondent and editorial writer for the Star Tribune, reports on urban design, transportation, international affairs and national politics. He can be reached at sberg [at] minnpost [dot] com.

Coming in Russia: the ventriloquist and the dummy