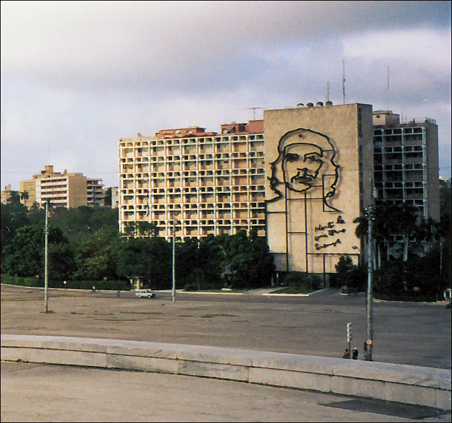 On a blustery February day in 1994, I walked up to a dilapidated but stately old mansion in northwest Washington, D.C., and rang the bell under a brass plate that said the building housed the Cuban Interests Section of the Swiss embassy.

A polite Cuban man ushered me in and asked me to wait in a room to the side of the once-ostentatious lobby. I sat on a Spanish-style chair facing a fading picture of Cuban President Fidel Castro.

I was a Washington correspondent for the Star Tribune at the time, working on a story about entrepreneurs from Minnesota who had bid on a telecommunications deal for Cuba, one of the few business exchanges the U.S. government was allowing.

As I waited to see Alfonso Fraga — the head of the office that came as close to an embassy as Cuba was allowed in Washington — it struck me how much the tiny island nation had dominated culture and news during my lifetime. I remembered my parents’ friends raving about vacations in pre-revolutionary Havana, history lessons on the Cuban revolution, the humiliating Bay of Pigs invasion and where I was on the day news broke of the Cuban missile crisis in 1962.

As neighboring nations, we had known more than political friction. Across the Cold War void, we had shared hurricanes, music and a passion for baseball. 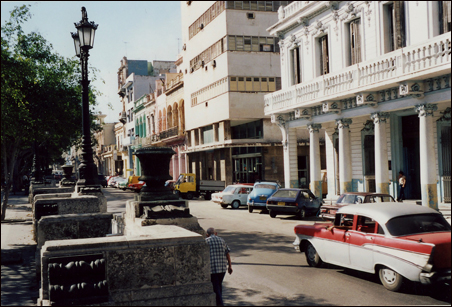 Photo by Sharon Schmickle
A street in Havana in 2002 looks more like a scene from the 1950s.

Forbidden Cuba beckons
Yet, I truly didn’t know Fidel Castro’s Cuba, a forbidden place for all of my adult life. This would not do for an American journalist who presumed to write about Cuba.

It took a while. But in 2002, I flew to Havana with my husband,  who also is a journalist. Politics aside, getting there wasn’t that complicated. We flew to Cancun, walked across the airport and found a desk for Mexican flights to Havana.

Almost everyone who reads travel stories knows a few of Cuba’s charming quirks. Photos we captured of them hang in an upstairs room of our Minneapolis home. They depict streets flanked by faded gems of neo-colonial architecture — graceful arches and wrought iron balconies. The cars are a throwback to Detroit’s heyday in the 1950s — all fins and extravagant curves.

But we learned much we hadn’t known.

One revelation was Cuba’s rich ethnic mix. Somehow in my mind — beginning with Lucille Ball’s wonderfully goofy and talented TV husband — I had come to think of Cubans as across-the-board Hispanic. If they were not Desi Arnaz, at least they were the Miami Cubans who were prominent in U.S. politics.

On the streets of Havana, though, the descendants of Africans who arrived in the holds of slave ships were heavily represented. From the African rhythms driving the music to the colorful dresses parading through parks, Cuba displayed a complex culture it shares with the rest of the Americas. I should have known.

Commerce amid capitalism
Another surprise was the stealth capitalism Cuba had adopted while Castro presumably looked the other way. “Want to see Hemingway?” little boys teased on the streets — pitching guide service to the legendary writer’s hotel, country home and favorite bars. I wished Hemingway could have been alive to depict himself as a platform for commerce amid communist austerity.

There was more secret enterprise. A taxi driver guided us to his neighbor’s undercover restaurant. We entered an empty hallway, a small curtained window opened and a wrinkled old face gazed upon the two of us. “Dos,” he said, turning his head to the inner room. The window closed, and soon we were ushered to a table for two in the living room.

Despite the ambition, the hardship of Cuba’s isolation and failed communist system was everywhere. Even in the best hotel restaurants, the food was simply awful. There were no quality ingredients. We couldn’t complain after we saw local Cubans standing in long lines for their government-issued rations. Transportation also was severely lacking. On a drive in the country, we were startled when Cubans tried to jump into our rental car and bicycle riders clasped the outer door handles for a boost to wherever they needed to go.

Faces of Ché everywhere
Yet another surprise was the ubiquitous presence of Ché Guevara, the Marxist revolutionary leader who had joined Castro’s movement to overthrow the former Cuban dictator, General Fulgencio Batista, in the 1950s. Guevara left Cuba in 1965, and was killed two years later in Bolivia.

What was so remarkable was that decades later Guevara’s youthful image — iconic revolutionary chic expressed through unruly hair, defiant gaze and jaunty beret — was everywhere in Cuba. We had expected to see prominent images of Fidel; instead, we saw Ché — on murals, T-shirts and posters. It struck us as brilliant marketing of the revolutionary spirit. Fidel was growing wrinkled and grey, but Ché would be forever young.

In the end, though, age caught up to one of the communist world’s most tenacious heads of state. Ailing and feeble at age 81, Castro stepped down on Tuesday, closing a long chapter in the lives of adult Americans.