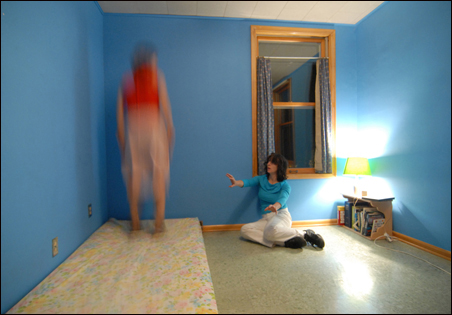 Courtesy of Body Cartography
A scene from “Holiday House #2,” staged at the choreographer’s home.

Ten audience members sit on folding chairs in the basement of a Powderhorn Park house in Minneapolis watching five performers who are sometimes only partially visible, sometimes almost nose to nose with the audience, sometimes literally dancing in the dark.

The women mix ordinary gestures (telling secrets, running a sewing machine, sucking on candy) with more emotionally charged activity suggesting fear, anger and claustrophobic confinement. While there’s no overt violence in “one born bad,” a dance partly about perverted cult “families,” the mood is creepy and sinister: the sewing machine sounds like machine-gun fire, people huddle in corners, a passive woman is gently undressed.

“Making this dance was like making a family in that it addresses issues of proximity and intimacy,” says choreographer Karen Sherman.

Sherman is one of a small but influential group of Minnesota-based experimental dance artists working to expand our consciousness of what dance can be. And not only by presenting it in their basements. She will be part of the SCUBA Touring Network on Feb. 22 and 23, an annual event that brings innovative, if not underground, dance from across the country to the Southern Theater in Minneapolis.

Experimentation began in the 1960s
While Sherman and her colleagues tend to be young (early 20s to early 40s) and often view themselves as subversive and under-the-radar, they are part of a tradition with roots in the postmodern movement of the 1960s.

During that era of revolution in arts and culture, a group of dance artists based mainly in New York City began to raise questions about everything — from what could be considered dance and who could perform it to how they could use their art to protest social injustice.

These members of what was loosely termed the Judson Dance Theater made radical choices about where they danced (on walls, in streets, on rooftops), the kind of material they employed (pedestrian movement, sports maneuvers, game structures), and who performed their work (sometimes non-dancers). One of their leaders, Yvonne Rainer, produced a famous “No” manifesto proclaiming that she and her ilk would eschew everything from virtuosity and spectacle to style and emotional involvement (“No to moving or being moved!”).

But these artists also were saying an emphatic “Yes” to certain kinds of exploration: finding the beauty in awkwardness, for instance, or the “intoxicating movement” in stillness, as Merce Cunningham put it. They wanted to strip away everything inessential and get to the bare bones of an art form they felt had been corrupted and degraded. And they wanted to examine the symbolically charged relationship between performers and the audience.

A role for the audience
Such exploration of the audience’s role is still going on, and not just in dance. New York Times Theater critic Charles Isherwood recently wrote about his own debut in a production at an East Village coffee shop, where audience members were asked to perform the play “Etiquette” while being fed dialogue and stage directions through headphones. He further comments that younger audiences accustomed to interactive video games and YouTube are not content to be passive theater goers.

Sherman’s “one born bad” piece also explores the power dynamics between audience and performers. “I chose my basement (in Powderhorn Park) as a venue because I wanted the performers impinging on each other and the audience, and everyone impinged upon by the space,” says Sherman.

Not the message of physical comfort and aesthetic joy that more traditional dance companies publicize to get butts in the seats of conventional theaters. But Sherman and Morgan Thorson, with whom she often works, see each dance more as an act of discovery than as entertainment or a highly polished objet d’art. “My process is my technique. The technique most dancers learn in class is merely a coping mechanism to pull off a style,” says Sherman.

For many of these artists the process is political. “I ask myself what is the power structure in the rehearsal space? Then I try a lot of different techniques to create the work and give the dancers some kind of ownership of it,” says Thorson.

Dance as everyday experience
Radicalizing the process involves making dance a part of everyday experience, rather than something that occurs only in isolated studios and enclosed theater spaces. “I like to present work in places that feel natural, and at all levels of development,” says Emily Johnson, whose group Catalyst has performed her work in a school bus, parking lots, even a bar in her native state of Alaska.

Olive Bieringa and Otto Ramstad, co-directors of Body Cartography produced their recent “Holiday House #2” in and around their Minneapolis home partly because it was cost-efficient, and partly to “choreograph the audience,” as Ramstad puts it, by moving them from room to room.

In fact, the willingness to view the process of dance making as a whole lot more than putting intricate steps together pretty much defines this maverick subculture where artists turn mere survival into creative solutions that serve their artistic needs.

These entrepreneurial spirits have formed artist-driven networks and performance series that get their work out there — locally, nationally and internationally — without relying only on established funding and presenting networks. Or on the established media for feedback on their work. For instance, Arwen Wilder and Kristen Van Loon of Hijack have started an innovative critical forum through handmade zines that contain responses from audience members they approach in the lobby after a performance.

And New York transplant Justin Jones started the podcast “Talk Dance MPLS,” where he interviews various local artists partly to satisfy his own curiosity, partly to make their ideas more widely available on the Internet.

A base at Bryant Lake Bowl
Perhaps most important, these artists have banded together to share resources and to set up places where they get to show their stuff and their friends’ stuff to one another and adventurous audience members. If this group could be said to have a home or a clubhouse, it would be the Bryant Lake Bowl Theater (BLB) in Uptown.

Like Patrick’s Cabaret, the provocative, informal performance venue that Patrick Scully established in 1986, the BLB presents a wide range of edgy performance work on a very tiny stage. More than four years ago, veteran performing artist Laurie Van Wieren set up “9×22” (the title reflects the dimensions of the stage), where every fourth Wednesday of the month choreographers sign up to show what they are working on, get feedback, and socialize over drinks with their colleagues and friends.

As managing artistic director of the BLB, Van Loon has helped to transform this small cabaret into a hot spot for the local avant-garde as well as visiting new wave artists. “We’ve developed the habit of trafficking artists across the country by guerrilla touring. We put them up, split the house with them, and sometimes piggy-back on shows already being presented somewhere else. For instance, we recently invited artists who were in town to perform at Walker Art Center’s “Out There” series to show new work at the BLB,” says Van Loon.

Walker performing arts curator Philip Bither believes the local dance ecology has profited from the vitality these artists bring. “They have raised the level of excitement and innovation around what is happening locally in dance and helped build greater understanding around much of the dance and performance work Walker presents,” he says.

And these artists have profited from the climate of radical art nurtured by the Walker in the 1970s. Sue Weil, the coordinator of performing arts at the time, frequently imported somewhat established innovators like Merce Cunningham and Twyla Tharp, as well as provocateurs like The Grand Union (an improvisational collective) and Trisha Brown. They came for residencies and performances that gave local artists the opportunity to interact and perform with them.

Exploration and relocation
Experimentation by individuals has been strongly encouraged by the Jerome, McKnight and Bush foundations, which fund the work of dance artists at all levels of development. Consequently, talented young choreographers like Sherman, Thorson, Jones, Ramstad and Bieringa have relocated here from less hospitable places like New York and San Francisco.

This rapidly expanding group also gets support from local theaters. The Walker has commissioned or presented a few of these artists, and co-presents the annual Momentum series for new work with the Southern Theater. Jeff Bartlett, the Southern’s artistic director, has championed a range of dance from emerging to mature artists since the 1980s. Red Eye Theater’s Steve Busa and Miriam Must consistently produce ground-breaking dance artists and give them free access to a rigorous “critical response” process that has helped them expand their work.

“No one in this group is selling a package,” says Busa. “These artists pose questions to themselves and try to find the answers. They are fearless in giving themselves the chance to fail.”

Risky behavior is paying off for many of these intrepid souls who are creating a buzz locally and nationally. Bieringa and Ramstad, who perform all over the world, were recently named Artists of the Year in City Pages. Sherman won a 2007 Bessie Award, the New York dance equivalent of an Emmy, for her performance in “Faker,” which was choreographed by Thorson. Wilder and Van Loon have performed all over the country — including prestigious gigs in New York and at the opening of the renovated Walker Art Center.

Yet these artists don’t view their careers as a vertical climb to bigger and better venues or cities. “Kristen and I have made an active choice to assert our identity in the dance community by seeking out a variety of places to show our work,” says Wilder. “It’s a challenge to make one piece fit a 9-by-22 stage, a cavernous warehouse space, and a loft with nails or spilled beer on the floor,” adds Van Loon. “But that’s the only way we will grow.”

Linda Shapiro is a freelance writer living in Minneapolis. She was a co-founder of New Dance Ensemble and New Dance Lab, and an affiliate faculty member in the University of Minnesota’s Department of Theatre Arts and Dance.

Courtesy of Southern Theater
Karen Sherman to perform at SCUBA.

Dance online at these websites