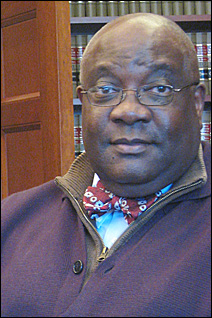 Few people in life can be compared to a patron saint…or even come close.

I didn’t know any, until I met Edward Toussaint Jr., chief judge of the Minnesota Court of Appeals. First appointed to the bench by Gov. Arne Carlson in 1995, Toussaint [too-SAH-nt]  and has served an unprecedented five terms as chief judge.

During which time, opportunities for Supreme Court positions and federal judgeships came…and went.

“I have no desire in my heart do anything other than this job,” he says of a job that involves decision-making in, what he describes as, the umbra of the shadow or grey areas of the law.

“Criminal cases, corporate litigation, governmental agency decisions, if that stuff doesn’t get your intellectual juices flowing, something is wrong. And we get that every week. Who could be bored with that?”

Despite the importance of his position, Toussaint, in his trade mark bow ties and hand-made vests, is self-effacing and without pretense.  He is not one to seek public adulation, although plenty have come his way.

Patron saint
Last fall he was awarded the Saint Thomas More award by the Lawyers’ Guild of St. Thomas More of Minnesota. The award, named after 16th century lawyer and diplomat Sir Thomas More, has only been given six times in the local guild’s 59 year history to individuals who personify Sir Thomas More’s devotion to divine principle. Toussaint, a man of deep religious faith, is the only non-Catholic and first African-American to receive it.

“He really is quite the guy,” says Margaret Marrinan, Ramsey County District Court judge and president of the Lawyers’ Guild of St. Thomas More of Minnesota. “[Toussaint] is the kind of person you would hope lawyers and students would aspire to be like. I have never heard a word from him that is anything but respectful.”

And perhaps that’s where comparisons to patron saints end.

It’s something Toussaint, 66, still does as an adjunct professor at William Mitchell law school and at the University of St. Thomas, where Marrinan says he is revered by his students.

And then there are the schools and community groups Toussaint visits throughout Minnesota, as part of his mission to put a face on the appellate branch of the law.

“I think I’ve been to every corner of the state,” he says. “Kiwanis Clubs, Boy Scout Jamborees, Chamber of Commerce meetings, you name it. I’ll figure out a way to get there.” (In between delivering Meals on Wheels once a month with his law staff, and attending his 15-year-old son’s football games.)

In St. Paul, Toussaint issues the oath of office every fall to fourth, fifth and sixth graders elected to the student council at Longfellow Humanities Magnet school.

“He swore my daughter in when she was on the student council,” says Principal Mark Vandersteen. “She’s now 26. He made an impression on her by adding a sense of formality and stature, and to be so faithful to the school says a lot about his character.”

Toussaint says: “My entire mission in life is dealing with school and that’s really heartfelt. I want to work myself out of a job. Crookston, Albert Lee, International Falls, I don’t care. I go there boldly because I think I’m supposed to be there.”

Character really is the bottom line for Toussaint, a husband and father of three, who believes the history in Black History Month still holds valuable lessons, and says it should be taught in context to all of American history.

He sees himself as a chief judge who just happens to be African-American.

“If you present yourself,” he says, “and if you are enough or better than enough, then race never becomes an issue.”