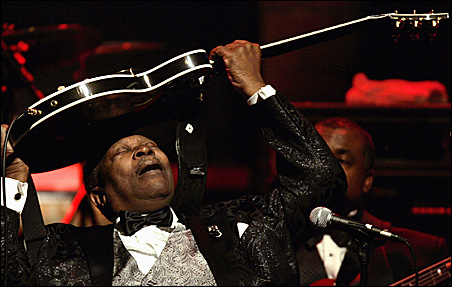 REUTERS/Paulo Whitaker
B.B. King knows the blues. Maybe he can help you.

Feeling blue? Whether you prefer Beethoven, the Bee Gees, Count Basie or Brother Ali, listening to music may be just what the doctor ordered.

That’s the finding from a new review published by the Cochrane Collaboration, an independent international organization that analyzes only well-designed studies on various health topics.

After examining five randomized trials, the reviewers concluded that either listening to or creating music under the guidance of a specially trained therapist can help ease depression.

In four of the studies reviewed, people who underwent music therapy had fewer symptoms of depression than their peers who received traditional drug and/or talk therapy for the same period of time. The fifth study was neutral: It showed no difference in symptoms between the two groups.

Another key finding: The dropout rate from music therapy was low in all the studies, an indication that people enjoyed — or, at least, tolerated — the treatment.

“I’m not surprised,” says Annie Heiderscheit, PhD, a music therapist at the University of Minnesota’s Center for Spirituality & Healing.  “Engaging in music is an enjoyable thing. Often, people don’t feel like it’s therapy because they’re enjoying the process so much.”

Most of the people in the reviewed studies were adolescents or older adults — two groups who tend to dislike more verbal approaches to therapy, notes lead Cochrane author Anna Maratos in an audio podcast posted online with a summary of the review. Older adults often feel uncomfortable talking about their feelings, she points out, and adolescents frequently rebel against doing therapy “homework.”

“Perhaps these populations need a less direct way of getting therapy,” Maratos says.

Two approaches
What exactly is music therapy? There are two overall approaches, explains Heiderscheit. The “receptive” approach involves listening to live or recorded music, often while doing another therapeutic activity, such as meditating, drawing or reminiscing.

“We work with the person’s particular preference,” says Heiderscheit. Sometimes, the approaches are combined.

According to the Cochrane review, Americans lean toward listening to music, while Europeans prefer performing and composing. Both approaches were found to be effective in treating depression.

Nor did it matter if the therapy took place in one-on-one or group sessions.

Orchestrating your own treatment
Although the findings from this Cochrane review are promising, don’t trade in your anti-depressants for an iPod. The five studies were small, and their populations were heterogeneous. As the Cochrane reviewers emphasized, larger clinical trials involving people from a wider demographic pool are needed to more confidently determine music’s effect on mood.

And for mild bouts of the blues — those days when your mood is slightly out-of-tune — a little bit of musical self-treatment might help. Attend a concert or listen to a favorite CD.

“There’s no universal piece of music that’s going to make everybody feel good,” says  Heiderscheit.  “I encourage people to think of what they enjoy. At different times of the day, it might be different kinds of music….Trust your intuition.”

What music soothes your soul and lifts your spirits? Share your picks below with other MinnPost readers.

Susan Perry, author and journalist, writes about consumer health, with an emphasis on women’s health.