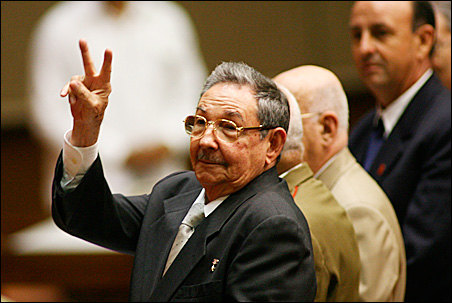 President Castro is at the helm in Cuba today, but his first name is Raul, not Fidel. And his style is more subdued than that of his firebrand brother who ruled the island nation for 49 years — more the pragmatic military man than the charismatic revolutionary leader.

Even before Cuba’s National Assembly named Raul Castro, 76, on Sunday to succeed his ailing 81-year-old brother, the signals from Cuba were that significant short-term change is unlikely, at least while Fidel Castro is alive.

“Although Fidel is not technically the supreme leader, he still is in the wings,” said Alfred Montero, a political science professor at Carleton College in Northfield who specializes in Latin American politics.

“You are not going to see any public display of conflict between the two brothers,” Montero said. “That is just not in the cards because it has never been there. They always try to be on the same page.  … Once Fidel dies, then we move into a different kind of game.”

Indeed, Raul Castro pledged in his first words as president Sunday that he would make no radical changes and he would consult his brother on every important decision, the New York Times reported.

“Fidel is Fidel, you know that well,” Raul Castro said to the National Assembly after it voted to name him president. “He is irreplaceable, and the people will continue his work even though he is not physically here.”

It remains to be seen whether the Cuban people will push for greater change after a half century of austere living and strict Communist rule.

The younger Castro brother takes charge of a nation of 11 million people where the average monthly salary is $16, reporters who defy the government are jailed, dissent is forbidden and severe shortages have forced people to turn to a black market in food, clothing and other essential goods, the U.S. State Department said in a background briefing on Cuba.

But Cubans who stayed home while others fled the country know Raul Castro well. He has served his brother at every step of the long-running revolution – albeit with a different style. On Sunday, Raul addressed the Assembly in a dark gray suit, gold-rimmed glasses and a conservative tie, rather than the military fatigues Fidel favored.

Raul Castro has served as Cuba’s defense minister since 1959, when the Castro brothers led the rebel group that overthrew then-dictator Fulgencio Batista. He commands a military force that has been condemned by human-rights groups for executing the Castro’s political foes but also won international credit for instituting modest free-market reforms after Cuba lost major support from the former Soviet Union.

The bottom line is that Raul Castro also commands loyalty from military officers who have a strong hand over tourism, export businesses, food production and other commerce.

Of course, Cuba’s fate also depends on U.S. policy and whether a new government in Washington will continue the tight travel and trade restrictions the Bush administration has maintained. A new generation of Cuban Americans is not as adamant about punishing a Castro-led Cuba as were the refugees who fled the island decades ago and plunged into American politics.

And while the drumbeat for democracy continues in Washington, the reality is that the United States has settled for something different in other Communist nations.

Americans are free to travel to Vietnam and China as long as they get visas from those countries; travel to Cuba is forbidden with certain exceptions under rules enforced by the U.S. Treasury Department. A cash card from a bank in Minnesota will draw yuan in China’s ATMs; the long-standing U.S. embargo prohibits that same bank from operating in Cuba. Minnesota proudly courts business with China; but Cuba is off limits with a few exceptions, especially in agriculture.

“We also urge the international community to work with the Cuban people to begin to build institutions necessary for democracy, and to support Cuban civil society,” Rice said in her statement. “The Cuban people, facing the legacy of five decades of tyranny, merit our solidarity and support as they seek to construct a brighter future.”

Raul Castro hinted Sunday that subtle change may be in the works. He proposed shifting at least some power to the provincial level, easing restrictions on private enterprise and reforming the beleaguered Cuban peso.

Any change that does come to Cuba, though, it is far more likely to reflect China’s market-oriented version of communism than U.S.-style democracy, said Montero at Carleton College.

China’s trade with Cuba has spurted in recent years. China also pumped goods, technical assistance and other aid into Cuba. In 2004, Chinese president Hu-Jintao visited Cuba and signed deals that would bring Cuba hundreds of millions of dollars more.

“Since the early 1990s, the Cuban leadership has been using China as a model,” Montero said. “It is not going to be democracy the way we define it … in which you have alternative parties competing freely and fairly in elections and an alternative press that is not run by the state… . These are the baseline indicators we would need to look for in order to say, ‘Ah, this is a different Cuba.’ “

Sharon Schmickle discussed developments in Cuba on KSTP this morning. And check out her recent post on a revealing visit to Cuba in 2002.

Few changes expected with Fidel still in the background