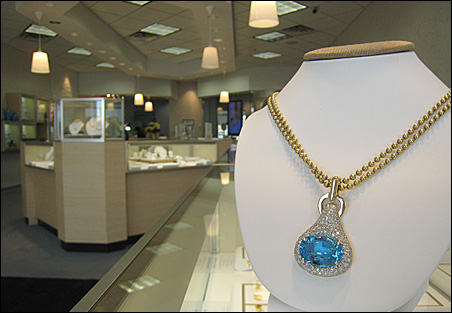 MinnPost photo by Roxane Battle
A 14k-gold blue topaz necklace with a 1.5-carat diamond for sale at Be Iced Jewelers in Edina. It’s yours for $860.

You’re no longer with that loser, so go ahead and treat yourself.

Not exactly the kind of romantic sentiment you’d find in box of candy hearts. But it is the slogan of Be Iced Jewelers in Edina, a second-hand jewelry store that is taking broken hearts to the bank.

“Fifty percent of our customers are women who want to get rid of jewelry from old relationships,” says Be Iced assistant store director Marjory Torgerson.

The concept is simple: Purge yourself from the memories of loser-boy by trading in your old jewelry and applying its value toward something new from the store’s ever-changing selection of new and pre-owned jewelry. Just like a pawn shop, but with a few very distinct exceptions.

“Comparing us to a pawn shop would be like comparing a dentist’s office to a gas station,” says Be Iced CEO and Chairman David Pomije (pronounced PAH-mih-jay).

“Pawn shops don’t spend $250,000 on a 1,500-square-foot retail space, and they don’t put in waterfalls, and they don’t hire jewelry specialists, and you don’t have to worry about tripping over a lawn mower or snow blower,” says Pomije.

“Although we have gotten a few calls for people looking for lawn mowers,” says Torgerson.

You won’t find any here.

‘We help you take it home’
The store, located on York Avenue South across from Southdale Mall in Edina, has all the markings of an upscale jewelry store: lighted and neatly arranged display cases, pale blue carpeting and wallpaper, recessed lighting and an art deco waterfall. The idea is to make their customers, who are mostly women, feel comfortable parting with the past.

“The atmosphere is just like a traditional jewelry store,” says Torgerson, “but it doesn’t feel like a regular jewelry store. There’s no one trying to twist your arm to sell you things. You come in, fall in love with something, and we help you take it home.”

Among the many used objects of affection, an 11-carat platinum tennis bracelet for $18,790.

Or a Tiffany-inspired ½-carat diamond and 14k white gold bangle bracelet for $799?

Going national
I traded in a Tahitian pearl ring and a diamond fashion ring and got close to $300, which I applied toward a brand new pair of titanium and 18k gold diamond Dolan-Bullock cuff links, with change to spare. Not bad.

But wouldn’t it be a little creepy wearing jewelry that belonged to someone else?

“It’s not about saving money,” he says. “It’s about getting more value for the dollar. And we’re experts at that.”

Three years after opening stores in Edina and Springfield, Ill., Pomije, a Twin Cities native and entrepreneur, is taking the concept nationwide this year, with plans to eventually have more than a thousand stores across the country. He’s banking on a team of savvy investors and his own hard-earned experience in the pre-owned business. Pomije is the mastermind behind FuncoLand, a used-video game franchise he founded in 1988.  In 2000, Barnes and Noble bought Funco Inc. for $162 million and now operates the former FuncoLand stores as GameStop, the world’s largest video-game retailer. According to Pomije, the franchise has gone from $2 billion in shareholder value to $8 billion in the last three years.

“We expect even bigger with Be Iced,” he says.

That’s a lot of bling.

“Our customers feel good when they leave,” says Torgerson. “They’ve recycled something and gotten something they love and they had fun.”