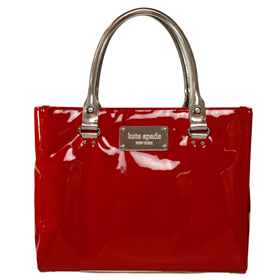 This Kate Spade handbag, featuring red patent calfskin and 14-karat white gold-plated hardware, retails for $525. Members of Bag, Borrow or Steal rent the handbag for $38 a week or $113 a month. It’s a hot pick for Valentine’s Day.

Some women settle for knock-offs. Others crave the Real Deal, and a formal Valentine’s Day date offers them a tempting excuse to splurge on a Louis Vuitton handbag.

Fashionistas who want the bling but lack the bucks are logging on to Bag, Borrow or Steal, a Seattle-based site that lends designer handbags on a weekly or monthly basis.

The 4-year old company claims nearly half a million customers, who pay membership dues, borrowing fees and shipping expenses that add up to a monthly cost ranging from $55 to $250 — or more. The idea: They can enjoy authentic designer bags at reasonable rates, switching it up as frequently as they like.

Amy Langer, 35, of Minneapolis, the owner of a staffing and recruiting business called Salo LLC, spends about $100 a month renting luxury handbags. She justifies the expense with ease. “I know people who spend $1,200 or $2,400 on a bag, and if I’m on the low end of that over the course of a year, that seems reasonable to me,” she said.

Langer’s Bag, Borrow or Steal membership began last March, when her employees bought her a $250 gift certificate in an attempt to nudge their briefcase-toting boss into the chic world of handbags. 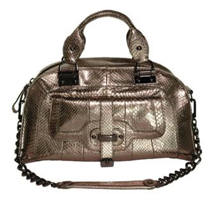 Langer rented this Rafe New York ‘Christine’ Satchel, retailed at $695, for $68 for one month.

“I did not expect to enjoy it,” she admitted, “but I’ve actually grown accustomed to carrying one, and I love it. I’ve abandoned my briefcase.”

Bag, Borrow or Steal offers more than 3,000 styles of luxury handbags from more than 100 designers, a selection that initially overwhelmed Langer. “When you first go there, it’s like, ‘Holy schmoly!’ There are so many choices. But you’re not committing to the next five years of your life; you can turn it in after a month — or even a week.”

Flavor of the month
That’s the advantage of renting, Langer said: It emboldens her selections. “If I had bought a handbag at the beginning, I would’ve bought a basic black purse. You think you’re going to carry it for a while, so it should be sensible. But this way, I’m able to experiment. I can rent something I would never think of buying, so I’ve had gold, red, silver, spiky — all these wild styles.” 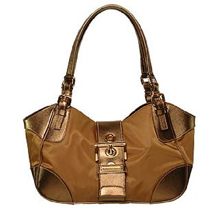 Not only have her monthly handbags become conversation starters, prompting praise from waitresses and flight attendants, they also have helped Langer learn her taste.

“Now I have a clearer idea of what I like,” she said. “I like an outside pocket for keys and cell phone. It cannot be too small, but too big is not good for me, either. I like a little bit of flash, but red patent is a bit much.”

If customers fall in love with their handbag of the month, they are allowed to purchase, or “steal,” them (as the company name suggests). But like most customers, Langer has never made a purchase; she’s hooked on the revolving door.

St. Paul service
A similar service is provided by the St. Paul-based company From Bags to Riches, founded in October 2004. Bag rental prices range from $22.95 to $299.95, which cover shipping. No membership is required.

Like Bag, Borrow or Steal, customers are allowed to buy a bag if they develop a strong attachment.

Renting is an apt approach to a fickle industry, From Bags to Riches notes on its website: “The fashion industry operates in a persistent state of progression, reinvention and renovation. New styles go out as quickly as they come in. The combination of high expense and low shelf life makes designer apparel affordable to only a few. The concept of borrowing levels the playing field and allows everyone the opportunity to carry the latest styles and forgo the cost. Genius!”