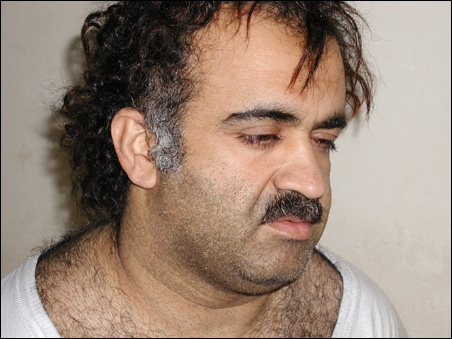 Controversy over the system for handling the cases of foreign men imprisoned at Guantanamo Bay, Cuba, flared anew Monday after Pentagon officials said they would seek the death penalty for six detainees who are charged with crimes related to the Sept. 11, 2001, attacks. Nicole Moen is on a team of Minneapolis attorneys who have represented one of the Guantanamo detainees since early 2005. She recently returned from her fifth trip to Guantanamo to meet with her client — an Algerian man named Ahcene Zemiri.

MP: Your client is not one of the six detainees the Pentagon charged on Monday — correct?

MOEN: Correct. Our detainee falls into the majority of detainees who are in this legal limbo. Aside from the six for which the government has announced it is going to seek the death penalty, the government has said it may seek military commissions — sort of like a trial — for 70 or 80 others… . The rest of the detainees get these internal proceedings which are nothing like a trial. At best they represent something like parole board hearings.

MP: The move to seek the death penalty for the six detainees already has prompted fresh criticism of the military tribunal system which presumably would be the venue for the trials. These men, of course, are charged with some of the most serious crimes imaginable. Why are the critics concerned?

MOEN: The criticism and concerns are not about whether the death penalty is good or bad. And they definitely are not about prison conditions. These cases are about due process and the ideals of justice and fair play that go to the root of our American system of jurisprudence … All of the detainees, along with our client, are facing the prospect of life in Guantanamo if the system does not change, if the government is not required to charge them and give them the opportunity to rebut those charges before a neutral decision maker… . The difference with the death penalty cases it is that the outcome the government seeks is all the more serious. This is going to require more scrutiny of the processes the government is using to arrive at that outcome.

MP: Certainly the prospect of the death penalty raises the stakes in terms of importance of each step in the process. While you aren’t representing one of the six, you are in touch with attorneys representing detainees. Have you seen any indication that the government plans to back away from controversial original rules that, for example, denied the detainees and their attorneys the right to see the full evidence against them?

MOEN: It may be too early for that… . As one of the lawyers for the detainees, I am somewhat puzzled because the military commissions have said themselves that they didn’t know whether they had jurisdiction to try the detainees … Clearly the process has problems and has barely gotten off the ground. But the decision was announced with very little background on how the government sees these things moving forward.

MP: A death sentence in this country normally is reviewed by appeals courts. Is it clear whether civilian courts could become involved in these cases?

MOEN: I think, yes. These military commissions were created under two statutes, the Detainee Treatment Act and the Military Commissions Act. Those statutes provide for review by the U.S. Court of Appeals for the District of Columbia Circuit. But the scope of the review has been very limited.

MP: The CIA has acknowledged that some of those charged were subjected to waterboarding and other aggressive interrogation tactics. In a legal sense, do you expect that will be a prominent issue in their cases?

MOEN: I would be surprised if it were not. Khalid Sheikh Mohammed [who allegedly masterminded the 9/11 attacks] and Muhammad al-Qahtani [the alleged 20th hijacker], over the course of their detention, have quote-unquote confessed to committing pretty much everything… . If you have confessions like that and you have those kinds of methods used to extract those confessions, any defense attorney would want to know about that.

MP: Meanwhile, the U.S. Supreme Court is getting ready to rule in two major Guantanamo cases. Could the ruling have any bearing on the six who now are charged?

MOEN: Yes… . The issue facing the Supreme Court is whether the Guantanamo detainees have any right to due process as embodied in the right to seek the writ of habeas corpus … . So if the court comes down with a decision this June saying yes, the Constitution applies and yes, the detainees have the right to due process and yes to habeas corpus — all of us who have cases pending in the district court in Washington get to go forward, including attorneys for the six… . But you never know what the Supreme Court is going to do.

MP: Did you see any changes at Guantanamo?

MOEN: Over the years, the camps have changed. When we first started going down, the prisoners were being kept in Camp Delta, one of four sub-camps… most of those were lined up in cell blocks and there was air flow through the cells which could get kind of hot. But the advantage was that the prisoners could talk to each other through the mesh grates. Since that time the government has constructed Camps 5 and 6 — modern concrete structures not unlike other maximum-security federal prisons in the United States, for better or for worse. One of the major disadvantages is that all of the prisoners now are kept in isolation, solitary confinement… . Mentally, that can be very harmful.

MP: How did you find your client on this meeting?

MOEN: He was holding up spiritually and mentally. He seemed to be in good physical health. He was happy to see us and very cordial.

MP: What was the substance of your discussion with him?

MOEN: Whenever we go we want to make sure we can check in on him visually and see how he is doing, really. And we want to tell him about his case… . We, along with other counsel [for the detainees], think that hopefully an end is in sight — either through the Supreme Court ruling or perhaps with the upcoming presidential election. Candidates from both sides have said they would like to close Guantanamo. We were able to share that with him for the first time.