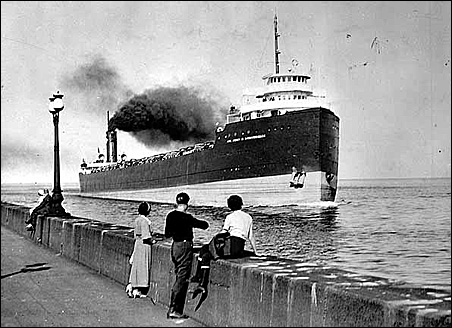 Courtesy of the Minnesota Historical Society
A carrier loaded with automobiles moves across Lake Superior in this 1935 photo by Bruce Sifford Studio.

DULUTH — Lake Superior is undergoing sudden increases in its water temperatures and dramatic declines in its lake levels, prompting scientists and others to wonder: Is the world’s largest fresh water lake in the throes of irreversible change due to global warming?

A broad new study is being readied in an attempt to figure that out.

He said less ice is likely aggravating summertime lake temperatures and even causing more evaporative summer winds across the lake surface that, combined with a prolonged regional drought, may have the lake in a cascading “feedback” of change-provoking-change from which recovery may be impossible.

There’s no doubt the lake is warming, a result of climate change and three years of drier than normal weather.  But with regard to near- and long-term lake levels, Austin said precipitation rates are difficult to assess in climate change models, and Superior’s level could stabilize if rainfall and snow are sufficient to off-set increased evaporation.

Austin is seeking funding support to examine what’s driving changes in the lake and to develop forecasts of what the lake may be like in 50 years or more.

Foot below ‘historic average’
Last August, Superior was within an inch of its 1926 record low, set after a years-long regional drought (it preceded the more famous Dust Bowl drought of the 1930s).

And while last fall’s unprecedented three-month rainy period prompted a 17-inch rebound of the lake’s level, Superior remains a foot below what’s considered its “historic average.” A foot of water in the expansive Lake Superior is enough to supply the residential needs of every Minnesotan for 42 years.

Austin said that Superior has been warming since 1980, and the worrisome part is that the rate of water warming has exceeded the rate of warming of surrounding air.

Lower lake levels complicate commercial shipping, requiring sea-going vessels to carry hundreds of tons less cargo in and out of the Port of Duluth-Superior. It has also affected recreational boaters, especially sailors whose crafts have six- to eight-foot keels that now scrape bottom in marinas and encounter more rocks in near-shore areas.

To accommodate boaters visiting historic lighthouses scattered around the South Shore archipelago of the Apostle Islands Lakeshore, the National Park Service in Bayfield, Wis., has constructed special additions to docks that now sit higher than the lower-riding boats.

“There has been a 12 percent decline in cargo carried by ships due to lower lake levels,” said Glen Nekvasil of the Lake Carriers’ Association that represents Great Lakes commercial shippers.  A 1,000-foot “laker” carrying iron ore or Western coal out of Duluth essentially loses one cargo hold, Nekvasil said from his Cleveland office. For example, he said, last November a large “laker” loaded to 63,000 tons while it normally would carry 72,000 tons.

Lisa Marciniak of the Duluth Seaway Port Authority estimates an additional 25 to 30 ships were required in 2006 to haul equivalent cargo when Lake Superior was at its historic average.

To address shallower harbors around the Great Lakes and through the St. Mary’s River that connects Superior with other Great Lakes, Nekvasil said, the U.S. Corps of Engineers will receive an added $50 million this year (increasing to $140 million), mostly for extra dredging because of the lower water.

Life in the lake
While lake levels affect what moves on Lake Superior, the water levels and warming affects what lives in Superior.

“This winter has been somewhat colder than the last few years, but not much colder,” Austin said, noting that lake temperatures have increased 4.5 degrees since 1980.

“That may not sound like much to a swimmer or a sailor,” Austin said. “But that rate of change over a few short years is significant to fish and plankton.”

One early victim may be populations of native whitefish — long a diner’s delicacy — living in Superior’s cold, deep water.

“Whitefish eggs are in near-shore areas normally protected by ice cover,” said Tom Hrabik, a fisheries biologist at the University of Minnesota-Duluth.  He said intermittent ice break-up over winter along with early spring ice-out can destroy eggs before they hatch.

But the effect most feared by Hrabik is that warming will provide “a thermal refuge” for unwanted exotics, including the round goby (a small but aggressive bottom-dwelling fish that displaces native species), carp, eel and cool-water zebra mussels.  He said Superior’s cold water has been an effective buffer against invasions of exotics.

Overall, Hrabik said, a suddenly warmer lake will change a variety of fish behavior patterns that have been established over thousands of years, and the result likely won’t be good for the popular whitefish and lake trout.

‘It is not good’
So how does a relatively small change of a degree or two or air temperature cause a “significant” change of four to five degrees in the lake?

That’s what Austin wants to examine with his planned study. But he offered a likely scenario:

Warmer overnight lows in winter reduces ice and exposes more of the lake to cold, dry temperatures resulting in more rapid evaporation. Lack of spring ice causes earlier warming of surface waters that lately have heated to “surprising” summertime levels (one mid-lake buoy in 2006 measured 75 degrees at the surface for a comparatively long period of several days).  Less differential between lake surface temperatures and the air brings winds from aloft down to the surface (Austin says winds are up 25 to 30 percent), and the warm winds cause summertime evaporation when previously the lake was so cold that none occurred in summer.

Warmer surface water results in later ice formation and also thinner ice that is subject to intermittent breakup throughout winter.  And so the “feedback” process feeds itself.

Nekvasil and Marciniak expressed hope that current lower lake level is a short-lived and Superior will rebound, as it did following the record low of 1926. And that may be the case if precipitation amounts increase across the Great Lakes Basin to off-set evaporation losses. So far that hasn’t happened.

“Lower lakes cost our members because of reduced cargoes and increased trips,” Nekvasil said.  “It is not good.”

As a scientist, Austin wouldn’t call the observed changes good or bad.

“I would say that Lake Superior could be a in a period of seeking a new stability,” Austin said.

It’s cold outside, but Lake Superior is getting warmer