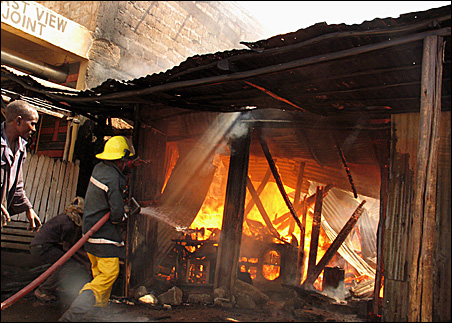 REUTERS/Patrick Olum
Firemen try to put out a fire in Eldoret Thursday after a police officer killed an opposition legislator, triggering fresh protests and violence in Kenya.

Ban met his predecessor, Kofi Annan, who has been in Nairobi trying to mediate a solution with, among others, opposition leader Raila Odinga and South African business leader Cyril Ramaphosa, who helped negotiate an end to Apartheid in 1994. Ban appealed to the negotiators to “look beyond the individual interest, look beyond the party lines.” He added, “Now the future is on you.”

He called on Odinga and President Mwai Kibaki, who declared himself reelected after what may have been rigged voting Dec. 27, to end the crisis, possibly by sharing power. Odinga has demanded a new vote. Kibaki had told Ban at a meeting in Ethopia Thursday that his position as president is non-negotiable.

Those developments were reported by the Associated Press and Reuters.

A love triangle
Fresh violence had broken out Thursday in the Rift Valley town of Eldoret after an opposition member of parliament tied to Odinga was killed by a traffic cop, who is a member of Kibaki’s tribe.

The Times of London called the killing “a classic crime of passion.” It was a matter of one man (the traffic officer) taking revenge on a cheating lover by killing the “other man” (who turned out to be David Too, an opposition MP), the paper said. But Kenya, the Times continued, is so keyed up over tribal and political tensions that even a love triangle can provoke violence in the streets.

“Across an area spanning hundreds of miles in Kenya’s west, houses were set ablaze, trucks were torched and gangs of youths armed with bows and arrows hauled drivers from their cars. Three people were shot and injured as security forces fired into the air to disperse them,” the Times reported.

“Too was driving from Nairobi to his constituency of Eldoret when the traffic officer recognized his traveling companion: it was the woman with whom he shared his home,” the Times said. The officer gave chase on his motorcycle, shooting the woman twice in the stomach before shooting Too four times in the head, according to police officials.

When word spread that the two men were from different tribes and political factions, violence erupted. Odinga, the national opposition leader, apparently didn’t help matters by describing the killing as a political assassination intended to further erase the opposition party’s slender majority in parliament. Too was the second opposition MP shot dead this week. Mugabe Were was killed four days ago in what appeared to be a robbery as he returned to his Nairobi home.

“Within minutes of [Too’s] shooting, youths armed with machetes were roaming Kisumu, an opposition stronghold on the shores of Lake Victoria. The sky turned black as they burnt tyres and blocked roads,” the Times reported. Meanwhile, an angry crowd gathered outside the police station where the traffic officer was being held demanding that he be handed over for mob justice.

Several thousand other Too supporters blocked roads and set houses afire while members of other tribes fled for safety to police stations.

‘An explosion waiting to happen’
The central ethnic tension surrounds the Kikuyu tribe of President Kibaki, which is envied by other tribes for its prominent role in Kenya’s political and economic life. The violence has shocked many Africans and Europeans who have seen Kenya as beyond the ethnic bloodletting that has beset much of the continent. But, according to an analysis in the British newspaper the Guardian, “the ferocity of the carnage has demonstrated just how much anger and resentment has been boiling below the surface.”

Kenya has been “an explosion waiting to happen,” the paper said. Its economy has been growing rapidly (6 percent last year) but the wealth has not been shared. Nearly 60 percent of the population lives in absolute poverty (on $2 a day or less), the Guaradian reported. Many live in squalid shanty towns, including the Nairobi district of Kibera, which the paper described as Africa’s biggest slum.

Kenya’s post-colonial history invited tribal violence, the paper said. The influential Kikuyu tribe is the nation’s largest, but accounts for less than a quarter of the population. Still, it controls a disproportionate share of land and business. When British settlers left in 1963 most sold their farms to the business-savvy Kikuyu, the Guardian said.

The nation’s first president, Jomo Kenhatta, was a Kikuyu, and his rule solidified the tribe’s advantage, one that Kibaki is intent on keeping.

The Washington Post described the situation as attempts by less socially prominent tribes to hire militias that now have “burned down houses and entire villages in an effort to displace tens of thousands of people, mostly Kikuyus, and reclaim their land.”

Los Angeles Times reporter Edmund Sanders described the Kenyan violence as more complex than that and developing in phases.

It started with outrage over what may well have been a rigged election, he said on the PBS’ “News Hour” Thursday. It soon spread to the slums where there was looting, probably motivated less by politics than by “a lot of frustrated young men, unemployed, poor, and this was an opportunity to vent,” he said.

Then it spread to the countryside and took on ethnic dimensions. Tribes used the violence as an excuse to settle old scores and reclaim land, he said. Now it has entered a revenge phase.

“So it’s really kind of evolving as time goes on,” Sanders said.

In Kenya, even a crime of passion ignites political violence