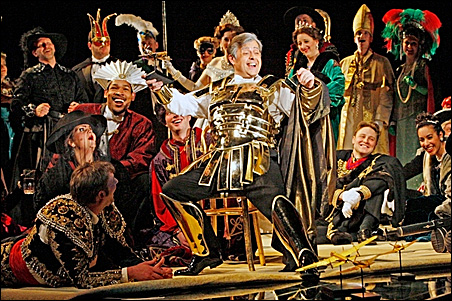 What would a night out on the town have been like for Mr. and Mrs. First-Nighter back in good old Hamburg in 1711?

We can only guess, but most likely our smart young couple would have put on some fine duds, piled into their coach and set off to see the latest opera at the Theater-am-Gänsemarkt (Goose Market Theater), home of the first public opera house in Germany. Once there, they would have expected to laugh, wave at friends, order food and drinks from the strolling vendors, and just occasionally check out the show itself, which in our terms would have been like a loose mix of “Cats,” “West Side Story” and Cirque du Soleil.

A lot has changed since then. Opera now is thought to be a highbrow entertainment rather than a party. Instead of playing cards or ordering drinks, people today actually listen intently to the music. If they nod off, they try not to snore.

And the show our First-Nighters went to see in Germany back in 1711, “The Fortunes of King Croesus,” a big hit in its day, has almost totally disappeared, as has its composer, Reinhard Keiser. Though Keiser was once called “the greatest opera composer in the world,” mention of his name might challenge a smart panel on the Saturday afternoon “Opera Quiz.”

But here comes the Minnesota Opera to turn things around — maybe. On Saturday at the Ordway Center for Performing Arts, in a co-production with England’s Opera North, the company will present the U.S. premiere of “Croesus,” the full title of which is “The Arrogant, Overthrown and Again Exalted Croesus,” an awkward title, to be sure, but one that promises, at the very least, a happy ending.

You can view a trailer for the upcoming production here.

Tim Albery, who is staging the production in St. Paul in a new edition that he devised for Opera North performances last fall, is convinced, nonetheless, that “Croesus” offers more than a happy ending.

‘Loose-limbed’ music
“It’s beautiful music,” Albery said recently during a rehearsal break at Minnesota Opera’s offices. “And Keiser’s orchestration is so inventive. You could almost say he has an overactive musical imagination.”

Even so, Albery hesitates to call the work a masterpiece. “But it’s a kind of early music that we haven’t heard much of,” he said. For one thing, it’s not like Handel, who actually played violin for a few years in the orchestra in Hamburg, when Keiser was music director there, and it appears that the two had a falling out, though we don’t know why. 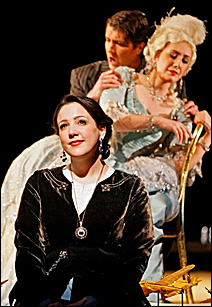 Photo by Michal Daniel
Susanna Phillips is Elmira in a tale of love and conquest.

“Keiser’s music is much more loose-limbed, more anarchic in structure, and the numbers are short,” Albery said. “He mixes up high and low culture in the Shakespearean manner. Remember, Keiser wrote this for a commercial theater. It wasn’t for the court. As a result, it’s one of these more popular, mixed-up, crazy pieces, where the goal is, ‘Always keep them happy;’ ‘Never let them be bored.’ Whereas, the tradition that Handel adopted when he left for Italy, the ‘opera seria’ tradition, became the dominant style of Baroque opera, with all these tragic, straightforward pieces, and from that point of view Keiser would have been thought of as grotesquely vulgar and totally out of fashion.

“But to me, Keiser’s music is wonderfully generous,” Albery says. “That’s what I love about it. It feels very open-hearted and welcoming. It’s like pop music.”

That’s one of the reasons Keiser and his music haven’t survived, Albery thinks. By the time Keiser died, in 1739, his operas were thought to be hopelessly out-of-date. And there’s another reason. As University of Minnesota Associate Professor of Musicology Kelley Harness pointed out recently in a lecture on Keiser and his work, opera scores in those days weren’t published. Of the 66 operas the prolific Keiser is known to have composed during his busy 65 years, fragments of 19 exist in one form or another, and only four or five are complete or nearly so.

Score found for revised ‘Croesus’
In the case of “Croesus,” Albery was able to get hold of a full score of the revision that Keiser made for a series of performances in 1730, which he cut down from nearly four hours in running time to about two hours and 15 minutes, and it is this shorter version that will be seen at the Ordway.

Albery’s fascination with Keiser, it should be noted, came about by accident. During a rehearsal break for a show he was directing at the Metropolitan Opera in 2000, Albery spied a recording at Tower Records of a Baroque opera that looked interesting: a complete performance of “Croesus” conducted by Rene Jacobs. The recording was based on a 1999 production in Berlin that was probably the first staging of this opera in nearly three centuries.

Albery found the music beguiling, and some months later when he got around to reading the libretto, he found at least one element in the story surprising: The lead character, Atis, doesn’t sing until the second act. He sent around the libretto and recording to various opera managers including Dale Johnson, artistic director at Minnesota Opera.

For the record, Atis, the mute son of Croesus, is probably the stuff of legend, whereas Croesus himself, the wealthy king of Lydia in the sixth century B.C., who is humbled by the Persian King Cyrus and who gave us the term “rich as Croesus,” has a place in history. Among several sources from the ancient world, he is mentioned by Heroditus.

Keeping the humor and pathos
It wasn’t until 2006, though, that Minnesota Opera signed on to do the show, after which Opera North agreed to be co-presenter. Albery, who had by then directed both Verdi’s “Don Carlo” and Sondheim’s “Passion” for the Minnesota Opera, then began what he described as a “radical reworking” of the libretto for “Croesus,” making cuts but also keeping the mix of humor and pathos that is to be found in the original libretto by Lukas von Bostel, which tells of war, imprisonment, betrayal, disguise and lessons learned.

For rewriting of the recitatives and other musical changes, Albery enlisted the aid of the conductor Harry Bicket, an early-music expert who has been a frequent guest conductor with the St. Paul Chamber Orchestra and the Minnesota Orchestra. 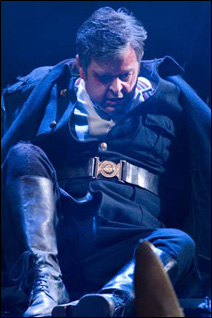 Photo by Robert Workman for Opera North
Paul Nilon is the only singer from Opera North’s production to appear in the Ordway production.

“I think all our changes are legitimate,” said Albery, “because the piece has real problems as a drama, and I think we’ve massaged it enough for it to feel coherent as a dramatic line.”

The performances here, which continue through March 9, with Bicket conducting, will closely resemble those given in England last fall, except that here a tenor will sing Atis, a role sung by a male soprano in England. And here the work will be sung in German with English surtitles projected above the stage, whereas the performances last fall were sung in English. The renowned British tenor Paul Nilon, who will portray Croesus, is the only singer who was also in the English production.

It’s commonly thought that the original audiences for Baroque opera showed little interest in the drama or story lines of the operas they attended. They talked through the recitatives, cheered the arias and, if they were seated in a box, played cards.

“But that doesn’t mean you shouldn’t take the drama seriously,” said Albery. “The plot of this opera, for instance, is wild, but we try to take it seriously and at the same time let the fun parts be fun.”

Michael Anthony is a former music critic for the Star Tribune.

What: “The Fortunes of King Croesus”
Performed by: Minnesota Opera and Opera North
Where: Ordway Center for the Performing Arts, St. Paul
When: March 1-9
Tickets: $20 to $150 (depending on date, seating)
Online

‘King Croesus’ opera was low-brow hit in its heyday