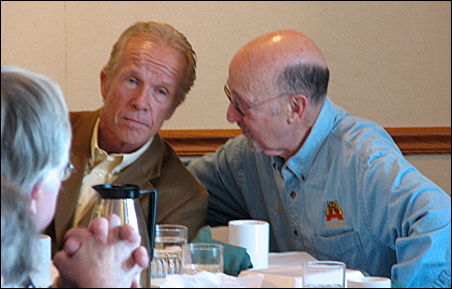 Last winter, there was much concern about retired Ramsey County District Chief Judge Larry Cohen. He’d slipped on the ice while walking his dog but picked himself up, thanking his lucky stars that no bones were broken.

Unbeknownst to him, though, the fall had produced slow bleeding in his brain. It wasn’t until a month or two later, when he and wife, Kathi Donnelly-Cohen, flew to the Cayman Islands, that the problems began.

“The high altitude on the plane did me in,” he told me this week.

He was airlifted to Miami, underwent emergency surgery and returned home for a long recuperation.

But this winter, he’s back in action, teaching, serving on boards, working as a special master in lawsuits and engaging in his hobby: people.

“That’s a great hobby; people. I spend time all day talking, on the phone and in person,” he said.

Cohen trifecta: mayor, county commissioner, chief judge
Cohen, 74, has a unique public service pedigree, earning the trifecta as top dog in the local executive, legislative and judicial branches. He was elected to the Ramsey County Board (including a stint as chairman) and served two terms as mayor of St. Paul — from 1972 to 1976. In 1988, he was named a judge, retiring 14 years later as chief judge for Ramsey County.

He’s a regular at the Friday meetings of the Pat Roedler/Ruby Hunt group, a discussion group headed by two former St. Paul City Council members. The diverse group meets weekly for lunch and lively talk at the Cherokee Sirloin Room in West St. Paul. Last week, Cohen invited St. Paul attorney Jeffrey Anderson to the gathering to speak about his legal work on behalf of victims of  sexual abuse.

“I’ve recovered pretty well,” Cohen said. “Pretty much up to full speed. For an old guy.”

Cohen doesn’t remember anything at all about the Cayman Islands trip last February.

“My wife told me what happened,” he said. We were there for three days before I started feeling woozy. She noticed I wasn’t reacting well, that I was dizzy and unstable and not walking well.”

At the island hospital, the bleeding was discovered. “But they didn’t have the facilities or a neurosurgeon, so I was medevaced to Miami,” he said.

The aircraft needed special clearance to fly low — to avoid the high-altitude problem that had exacerbated the bleeding — over Cuba.

Serious situation, then recuperation
In Miami, surgeons drained more than two cups of fluid from his head. Back in St. Paul, doctors discovered blood clots in his legs, so there was more surgery.

Then he was sent for recuperation to the Sholom Home on Midway Parkway in St. Paul. One of his fellow patients there was George Latimer, another former St. Paul mayor. Latimer was recovering from hip replacement surgery. “We spent time talking; it made the time go faster,” Cohen said.

The recuperation also gave Cohen, who serves on the board of directors of Sholom Home, a firsthand look at the operation, from an in-bed perspective.

Indicative of his recovery is the continuation of his irreverent sense of humor. Last week, he wore a denim shirt bearing the inscription of an out-of-state Catholic Church, with the word “Pastor” embroidered above the pocket. He’d gotten it at a secondhand store. And, he laughingly explained, once, while wearing it, a shopkeeper gave him the clergy discount.

Cohen and his wife spent time this week in Arizona, visiting her parents. It’s the first time he’s traveled since the operation and marks another landmark in his recovery.

“I’ve been fortunate. But I think I’ve used up a few of my lives,” he said. “Just how many lives does a cat get? Nine?” he asked his wife.