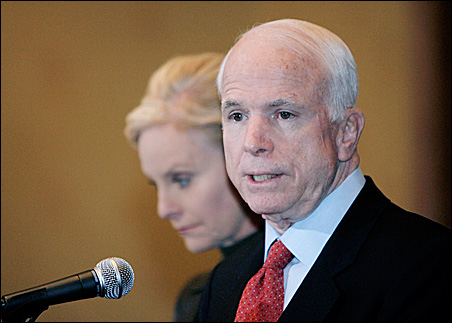 In a story that should knock the Michelle Obama “really proud of America” contretemps off the front pages, the New York Times unleashed a 3,000-word exposé on John McCain’s relationship with a registered lobbyist, which the Washington Post advanced later last night.

For a candidate who’s become a champion of campaign-finance reform, the stories are potentially quite damaging, but criticism of the Times is reverberating as well. The paper has been knocked for dredging up an eight-year-old controversy, timing it to ruin McCain’s nomination-clinching buzz, and most sensationally, insinuating a McCain affair without sufficient evidence. One fascinating sideshow: Did pressure from other media force the Times to run a story it has held for months?

Before examining the messenger, let’s recap the substance: During McCain’s 2000 presidential run, lobbyist Vicki Iseman had become so omnipresent — “turning up with him at fund-raisers, visiting his offices and accompanying him on a client’s corporate jet,” write Times reporters — that top aides warned her to stay away and repeatedly confronted McCain. Two unnamed former aides said they were worried the relationship was romantic — which both principals deny — and McCain “acknowledged behaving inappropriately,” according to the Times. A third aide, former top strategist John Weaver, said he feared Iseman’s omnipresence would undermine McCain’s anti-special-interest message. (Weaver resigned from McCain’s campaign last summer as its poll numbers collapsed; it’s possible the other former aides were working for rival Republican campaigns when they talked to the Times.)

Intervened for Paxson with FCC
As it turns out, McCain earned a 1999 rebuke from the Federal Communications Commission for intervening in an FCC deliberation on behalf of an Iseman client, Paxson Communications. McCain took at least four flights on Paxson planes, plus a fifth flight with Iseman that was not reported to government authorities. According to the Post, in 2000, McCain received $20,000 from Paxson and its law firm; since then, Iseman clients have donated $85,000 to the Arizona senator.

Stripping away the dalliance angle, the story isn’t much different from a Times piece two weeks ago examining ties between a watered-down Barack Obama-sponsored nuclear regulatory bill and Exelon, the energy firm whose principals have given Obama $227,000 since 2003. In both cases, the ties raise questions, but there are also mitigating circumstances. In Obama’s case, Republicans could fairly be blamed for sabotaging the bill; McCain, the Times notes, has consistently sought the sort of deregulation that would have allowed Paxson to buy a Pittsburgh TV station at issue in the FCC case.

At the same time, the stories cast needed light on the gap between a candidate’s image and veracity. Obama had misrepresented the bill’s outcome at least once on the stump; McCain flew on corporate jets even while loudly decrying special interests who ladle favors to politicians. (The Times also recounts other McCain examples, some dating back to his involvement in the late-’80s Keating Five scandal.)

A blistering statement and rebuttal
Although Hillary Clinton has floated Exelon’s name in interviews, Obama hasn’t really counterattacked, and for now, that story has dissipated. McCain is taking a different tack: After refusing repeated interview requests, hiring Bill Clinton’s lawyer in the Paula Jones case and lobbying Times editor Bill Keller not to run the story, his campaign issued a blistering statement saying “John McCain has a 24-year record of serving our country with honor and integrity. He has never violated the public trust, never done favors for special interests or lobbyists, and he will not allow a smear campaign to distract from the issues at stake in this election.” The campaign has since released a more detailed rebuttal they say they provided to the Times, and McCain scheduled a morning press conference.

Even though the Times endorsed McCain in the New York primary, his campaign will attack the paper as liberally biased, according to the D.C. website Politico.com. (If you’re trying to rally conservative Republicans, beating up on the Times is a gift from above.)

Another McCainiac argument: The Times allegedly rushed into print a moldy exposé that it has sat on for months. In December, the Drudge Report posted an item about the piece; Politico quotes New Republic editor Noam Scheiber as saying his magazine was about to run a story about “the Times’ foot-dragging on the McCain story, and the back-and-forth within the paper about whether to publish it.”

According to Scheiber, the New Republic piece will be up on the magazine’s site sometime today. Politico cites two unnamed Times staffers claiming that one of the paper’s bylined reporters, Marilyn Thompson, was dissatisfied that the piece was held so long. There’s no response from Thompson, who is leaving the Times for the Post; a Times editor denies the delayed story had anything to do with her departure.

Meanwhile, via Talking Points Memo, Radar Magazine reports that Politico and Newsweek were also hot on the trail of the held-up story. Intriguingly, Radar reports that Marc Santora, the Times reporter covering McCain, “left the beat in part because of McCain’s unhappiness with the pursuit of this story.” If true, it’s interesting that the bad blood never crept into the blogging and reporting of the other boys and girls on the Straight Talk bus.