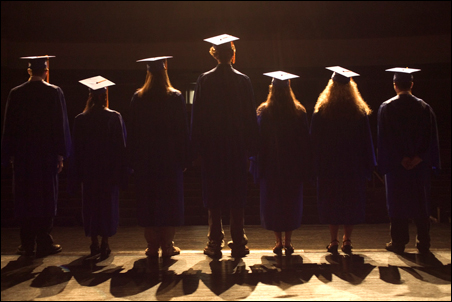 The prototypical student day spent schlepping from one high school classroom to another for period after period of algebra, English comp, and, for a select few, college prep?

There’s been no shortage of talk about radical reform in Minneapolis Public Schools in recent months. But very little of the public discussion has focused on what’s perhaps the biggest change in the offing: the wholesale redesign of the district’s seven high schools.

The goal — that every graduate be college-ready — is almost as ambitious as the road map for getting there.

By borrowing ideas from other districts and asking the business community what skills it needs in tomorrow’s workers, MPS administrators and consultants from McKinsey & Co. have put together a plan to have every Minneapolis high-schooler enrolled in a small, specialized, academically demanding program by 2014.

District poised to take big leap
“It’s not a step, but a leap,” said school board member Chris Stewart. “People can read about it, hear about it, maybe kind of understand it, but not realize what a leap it is.”

Stewart, on the other hand, is in a good position to know: As a former work force developer with the Minnesota Department of Employment and Economic Development, he has to figure out how to keep the state’s labor pool attractive to employers.

Indeed, he ran for the school board because he was frustrated by the gap between the business community’s needs and the district’s performance. The four-year graduation rate hovers near 50 percent, and there are 1,600 school-age kids who simply don’t attend. Add to that the same demographic challenges facing the district as a whole: Between 2006 and 2011, MPS expects to lose a third of its high-schoolers.

“There are 1,600 kids who don’t go to any school,” said Brenda Cassellius, MPS associate superintendent spearheading the transformation. “We want them back.”

At the same time, the labor market has undergone a dramatic transformation since the heyday of the traditional high school, with one track for academic achievers and another for students deemed better suited to blue-collar work.

“The old system was based on the industrial model, where some kids went to college and some didn’t. But that was a time when a high school diploma was enough,” said Stewart. “The tools of even dry, conservative trades are now driven by technology.”

Some changes in place; others to phase in
Some of the changes are already taking place, while others will be phased in over the next three years. When the redesign is complete, every high school will offer four core programs: Advanced Placement, College in the Schools, Career and Technical Education and International Baccalaureate coursework. (The lone exception, South has chosen not to offer IB.)

All four programs will be available starting this fall at Roosevelt, Edison, Washburn and North. Some of the offerings are already available at the district’s other three high schools.

IB is already in place at Southwest and Patrick Henry, where high-achieving teens compete to get in. The program has proven to be a draw for families, who often perceive it as a sign that a school is successful, whether their child is a good candidate or not.

Expanding the program to other MPS schools should have a positive ripple effect. Superintendent Bill Green wants the demographic makeup of kids enrolled in each IB program to mirror the racial, ethnic and gender makeup of the larger school that houses it. To meet this goal, teachers will have to begin preparing all kids to compete for admission in middle school.

If IB is the most well-known of the revamped programs, the most radical change planned is the expansion and refinement of Career and Technical Education, or CTE, something Minneapolis has been working on for several years. There are programs in information technology, geographical information systems, engineering and food technology. Some of the programs — automotive technology and construction, for instance — may sound like the vo-tech of generations past, but MPS administrators say they’re anything but.

Career paths now high-tech, not vo-tech
“It’s high-tech, high-wage, high-demand,” explained Wendie Palazzo, Minneapolis’ CTE director. Before she came to work for MPS 10 years ago, Palazzo worked for the United Auto Workers’ dislocated worker program. She was often frustrated by how hard it was to convince people who had been laid off that they could retrain for new, better jobs.

She hopes that exposing kids to interesting, lucrative careers in growing industries will make tackling more rigorous core academics seem relevant and worthwhile. Food technology, for instance, is aimed less at equipping kids to work in restaurant kitchens than at General Mills. To succeed, a student needs to study chemistry; if they’re motivated to excel, they can enroll in Advanced Placement chemistry.

Many CTE courses will grant college credits to students who pass a test at the end of the year; some already use the same curriculum taught at Minneapolis Community and Technical College or another post-secondary institution.

So far, district data show CTE students outperforming their peers overall, with the most impressive gains among disadvantaged students. Students who participate in at least one year of CTE score an average of 16.5 percent higher in math, 12.4 percent higher in reading, and almost 8 percent higher in writing. Special efforts are being made to recruit girls into technology and engineering programs, Palazzo said.

The other two core programs, College in the Schools and Advanced Placement, will be open to CTE students.

According to consultants from McKinsey & Co. who collaborated with MPS administrators on the redesign, teachers at urban high schools often have 300 different students each year — many for a single class period. Ideally, the new schools-within-schools will have only 150 students in each grade; kids will see the same teachers for more than one year.

The closer relationships fostered are credited with plummeting drop-out and suspension rates and dramatic increases in the number of kids graduating from small programs in Boston, Baltimore and Chicago. One, New York City’s Urban Academy, sent 96 percent of its graduates to four-year colleges in 2000, according to McKinsey.

Astounding though that figure is, MPS administrators are quick to point out that a degree from a four-year university isn’t necessarily the goal for every Minneapolis student — especially not in an era when technical skills are more marketable than an expensive B.A. in liberal arts.

Further down the agenda are more flexible scheduling and more opportunities for kids to learn outside the school building. While those most at risk may face longer school days, some kids may spend just a few hours in school and the rest at an internship or a community college.

“The way we conduct high school is rigid and stifling,” said Stewart. “For the iPod, IM generation of kids, sitting in an old-style building with no AC, with a teacher at the head of the room doesn’t necessarily work. They could be at their computer figuring out something that’s fun and interesting.”

All the changes, of course, will cost more
None of this is cheap, and MPS faces a budget shortfall of $13.1 million next year and the possible loss of $30 million a year in referendum funding if voters won’t renew a levy that expires after the 2009-10 school year.

The district has turned to foundations and private donors to fund the transition. Achieve Minneapolis (formerly called the Minneapolis Public Schools Foundation) is trying to raise $5 million to $10 million.

Money will continue to be an issue even after the transition is complete. In Minneapolis, each high school will need eight to 15 additional teachers to make the overhaul work. Some of the cost is being met by reducing the number of administrators and shifting some of their work onto teachers. Other program costs are being met by federal grants.

And of course, if the reforms do attract kids back to school and keep them there, MPS will be entitled to additional per-pupil funding from the state.

A more immediate concern is communicating the vision to people long accustomed to thinking of their options as demanding coursework for the college-bound and the basics for everyone else. Kids will be exposed to their options as early as sixth grade, but their parents need to be sold, too.

“One of our challenges is to change the community’s mindset about it,” said Gilman. “That’s not easy because we have 50, 60 years of assumptions to overcome.”

For his part, Chris Stewart is convinced that making high school a place where kids want to be, and an investment they regard as worth their time, will be the best advertising. “These are pathways to highly paid, desirable jobs,” he said. “All those doors need to be open, and kids will fit where they fit.”

Beth Hawkins, former reporter and editor for City Pages writes about criminal justice, schools and other topics. She can be reached at bhawkins [at] minnpost [dot] com.

Click on the map below to see how many students attend Minneapolis public high schools and how many teachers are at each school.