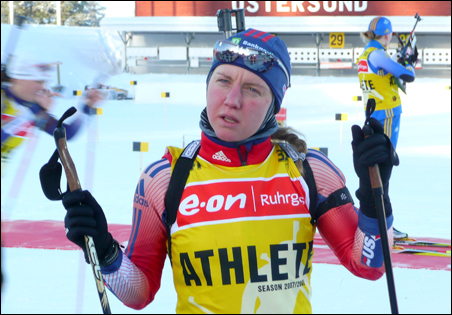 Mamas, make sure your girl babies grow up to be biathlon athletes.

It may be a cold sport. It may be a noisy sport. It could even be a dangerous pursuit, what with guns and all.

But it’s pretty darn easy getting to the world championships. For Caitlin Compton, of Minneapolis, it might just be a hop, ski and a couple rifle-range trips to a Winter Olympics, too.

Now that’s a rapid rise
Compton’s trajectory from cross country skier to member of the U.S. World Championship biathlon team has extended for, oh, about … eight weeks. Yep, on Dec. 8, Compton competed in her first-ever biathlon race. She’d dabbled in shooting for a couple of years. And she’d been a very good, national-level cross country skier for a decade.

But 60 days ago, she was less than a rookie. Saturday in Ostersund, Sweden, Compton will race in the fifth race of her career, and it will be the women’s 7.5-kilometer world championship. (See the update at the end of the story to see how she did.)

“This is the fast track,” she said.

Biathlon is the winter sport in which athletes cross-country ski and stop — occasionally — to shoot at a rifle range. It’s an old military event. The key: skiing fast but having control so one’s body is calm enough to shoot accurately. The real key: incredible fitness.

Compton, 27, was in her hotel room today, speaking with MinnPost via Skype and Ichat,  telling a remarkable biathlon tale.

Two-part tale
Part One: She’s a fine skier — she won the recent 5K in the U.S. national cross country championships — and has been on the U.S. world cross country team. That’s her strength.

Part Two: the health of women’s biathlon in the United States is extremely poor. Turnover is as common as the sniffles. Right now, a woman who admits that in recent races, “I didn’t know what I was doing,” is among the top five biathletes in the nation. In her estimation, there can’t be more than 10 women in the United States competing at a high level in the sport. Ten.

That’s a programmatic problem, but she’ll take what she can get.

She grew up in New York City, where guns are more common than skis. Moved to Vermont. Took up cross country skiing as a teenager, Got good, real good. Won the Junior Olympic title in the 10-kilometer race in 1999. Was a top-20 NCAA skier at Northern Michigan University.

In 2004, her mother, Susan Aylesworth, was diagnosed with ovarian cancer. Aylesworth lives in Minneapolis. Caitlin, who had just graduated from college, moved to the Twin Cities to help her mom. She worked with local ski and biathlon guru/trainer Piotr Bednarski. During some summer training, he introduced her to the rifle. First time she ever fired one was in 2005.

Then, in May 2007, she decided to give biathlon a shot, so to speak. Once the snow fell, she did OK in various preparatory races, and the U.S. national team took her along to Sweden for the world championships, which begin Saturday.

Biathlon race preparations complex
Getting ready for a biathlon race is a whole lot more complex than for a plain old cross country race. In the latter, a skier checks her equipment and makes sure her race bib is on properly.

In biathlon, “That multiples by about 50 for me.” Rifles have to be marked. Clips loaded. Firing pins checked.  “There are so many things going on, it’s like when the race starts, I can finally relax,” Compton said. “Just ski and pull the trigger.”

This isn’t a lark. Her goal is the 2010 Winter Olympics in Vancouver and even has the 2014 Winter Games in Sochi, Russia, in her site.

“I’m also planning on going back to graduate school,” Compton said, “just in case I end up shooting myself in the foot.”

That’s more than a rookie mistake. That’s an occupational hazard.

UPDATE: Compton finished 70th of 98 competitors in the race Saturday. She missed five of her 10 shots. Still, she told the U.S. Biathlon Association website she was happy with her experience, especially because 11,000 fans had lined the the course in Ostersund. She vowed to carry on to Vancouver in two years.