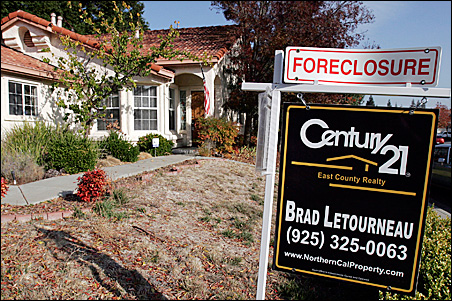 REUTERS/Erin Siegal
A foreclosure sign in Antioch, Calif., is one more indicator of the collapsing real estate market. California leads the way in housing price declines.

With the home mortgage crisis worsening, the Bush administration and Congress are looking into — ever so cautiously — a massive and expensive rescue program for defaulting homeowners.  Powerful financial institutions, some of the planet’s most prominent laissez-faire advocates, are pushing the idea.

Sound like a bailout? Advocates aren’t using the b-word, of course.

That’s because any plan seen as a bailout makes both Democrats and Republicans in Washington nervous. After all, most of the people who elected them didn’t overextend themselves when they bought their homes. Further, a huge rescue plan would substantially benefit banks that made bad loans and the Wall Street firms that bundled those risky mortgages.

Still, the bankers warn that unless the government does something, $739 billion in mortgages are at risk of defaulting over the next five years and millions of people could be out of their homes. So Bush administration officials and other policymakers are expected to talk rescue options this week with banking executives, who in the past have told the government hands off and are now advocating something close to handouts.

The irony of all this has not gone unnoticed by Edmund L. Andrews of The New York Times: “Over the last two decades, few industries have lobbied more ferociously or effectively than banks to get the government out of its business and to obtain freer rein for ‘financial innovation.’ ” A federal rescue program proposed by bankers “provides a stunning glimpse of how quickly the industry has reversed its laissez-faire disdain for second-guessing by the government — now that it is in trouble.”

Trouble could drag on
Losses from defaulted mortgages and mortgage-backed securities are now about $200 billion. It’s likely to get worse, perhaps catastrophic.

A number of banking industry analysts and economists say the subprime crisis could explode into the biggest disaster for the industry since the savings and loan collapse nearly 20 years ago. “The impact here could be far larger [than the S&L crisis] in terms of the dollar amount and the spillover effects into other parts of the economy, particularly the consumer,” predicts Merrill Lynch economist Kathy Bostjancic.

And it could go on for some years. The Toronto Globe and Mail reports that the subprime saga has many similarities to financial crises of the past. “Financial reckoning typically drags on for several years and ultimately results in much bigger losses than initially estimated,” economists at Goldman Sachs say.

Some steps have been taken. The Bush administration has put together a program to freeze the rates for a limited number of troubled borrowers. Congress and the Federal Reserve Board have tried to ease the economic pain with a stimulus and rebate package as well as aggressive rate cuts.

But so far, those efforts aren’t enough. And now ideas for a huge government rescue are being floated in Washington, proposals we’ll likely hear more about in the coming weeks.

Confidential proposal
The Bank of America recently circulated to Congress a confidential proposal calling for the government to set up a Federal Homeowner Preservation Corporation. The idea is that this new federal agency would buy up billions in shaky mortgages, forgive debt higher than today’s market value of the homes involved and provide federal guarantees to refinance those loans. But Bank of America warns: “We believe that any intervention by the federal government will be acceptable only if it is not perceived as a bailout of the bond market.”

Sen. Christopher Dodd, D-Conn., and chairman of the Senate Banking Committee, has offered a similar proposal, and there are others as well. (Senate Democrats, for example, are suggesting a change in the bankruptcy law that, they say, could help more than 600,000 families keep their homes by allowing judges to ease the terms of mortgage loans during bankruptcy proceedings.)

Reuters reports that the Bush administration — at least publicly — has been cool to the idea of a bailout. But Friday, White House spokesman Scott Stanzel seemed to leave the door open. When asked about a massive rescue, Stanzel said: “There are a lot of ideas out there. … So there are many different ways in which we can address this problem and we continue to look at ways in which we can do that.”

In other words, nothing’s ruled out, except using the b-word.

Mortgage rescue plans: from hands off to handouts