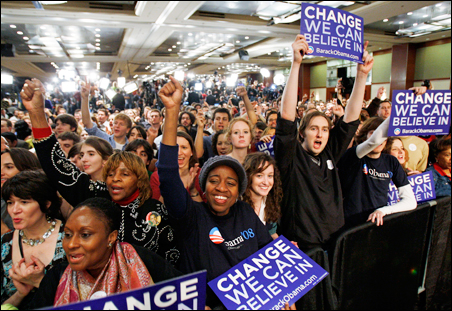 People from both political parties swarmed to the Minnesota caucuses Tuesday, fought traffic and waited in long lines to vote for president.

And they did the same thing around the country in record turnouts at primaries and caucuses, trudging through a foot of snow in Alaska, working their way past the Giants’ victory parade in New York City and even showing up at Virginia polling places — a week before that state’s primary, according to the Associated Press.

The AP’s Erin McClam quoted Jessica Pomey of Oakland as saying that “politics used to be something you didn’t talk about. Now it’s everywhere, in hair salons, everywhere. It’s part of the conversation.”

Both parties seeing election energy and excitement
The energy and excitement surrounding this year’s campaign on both sides is palpable, far different from previous presidential election years. There were so many people at my neighborhood caucus in St. Paul that you couldn’t walk down the school hallway. In past years, you could throw a bowling ball in the same hall and not hit anyone.

Part of this week’s excitement, of course, was a super primary election that many had hoped would help determine the nominees. With Mitt Romney doing poorly on Tuesday and dropping out Thursday, Arizona Sen. John McCain has come close to securing the Republican nomination. But on the Democratic side, it was basically a draw between Sen. Hillary Rodham Clinton and Sen. Barack Obama, and the campaign beat goes on and on. One of the pundits on CNN the other night said the Democratic race was a “mess.” To which anchor Lou Dobbs responded, “A splendid mess.”

How did we get such an exciting election season, just the way the political science books say it should be, when so often people feel alienated from the process?

“When you have competitive races, people come out of the woodwork because they have a chance to make a difference,” Julie Dolan, a Macalester College political science professor, said in an interview. “It’s a dream for my classes. I can’t think of a time when the late primaries will matter as they do this year. People in those states have the chance to participate.”

David Schultz, a Hamline University political science professor, cites several reasons for the high degree of activism and participation this year, especially on the Democratic side: dislike of President Bush; opposition to the Iraq war; “Obama fever,” in which Senator Obama’s message about change and the future has resonated with younger voters and, finally, Obama’s “grass-roots” strategy, which also has brought new people into the process.

“In almost any of the states that Sen. Clinton lost, she would have won four years ago, but she didn’t count on all the new people Obama brought in,” Schultz told MinnPost.

Conventional wisdom says candidates want to wrap up the nomination early, consolidate their supporters, reach out to their detractors within their party and save their money for the general election. In McCain’s case, that means making nice with the conservatives in his party who don’t like him.

“He (McCain) cannot win a general election without having the unambiguous support of conservatives around him — especially going up against a Democratic Party that is so, to borrow a phrase from Barack Obama, fired up and ready to go,” wrote Adam Nagourney in The New York Times.

“But the extent to which he emphasizes conservative positions could complicate his effort to win over the moderate and independent voters who have so long been drawn to Mr. McCain and is one of the reasons why many Democrats view him as the toughest candidate the Republicans have.”

Quick nomination wrap-up can involve tradeoffs
The Democrats have other worries now: namely, continuing an exhausting and expensive campaign with contests this weekend in Louisiana, Nebraska and Washington and the so-called Potomac primary Tuesday in the District of Columbia, Maryland and Virginia. While party officials worry aloud about the problems inherent in a long campaign, observers like Schultz aren’t so sure.

“I don’t think it’s a problem unless they kill each other in debates,” he said. “The campaign continues to bring people into the process, and it keeps their names in the news. If McCain has it wrapped up, no one’s going to cover him.”

Roger Cohen wrote in the Times simply: “I love it. After the fear, aloofness and manipulation that have been the coin of the Bush Administration’s realm, a district-by-district battle for the Democratic nomination is what the country needed to reignite dulled senses and cowed hopes. A woman and an African-American, both of rare talent, are raising the political bar and ending business as usual just when America’s image was most jaded.”

From England, the Independent, noting the earliest start ever to a presidential campaign, offered its hope for more of the same: “… The frenetic pace and switchback nature of the Democratic contest has shown off the U.S. election process at its thrilling best….we dare to hope that the race will go on — perhaps even to the party convention in Denver at the end of August.” And that was written just before Super Tuesday.

It’s election fever. Catch it while you can. It may not be this interesting and this much fun again for years.