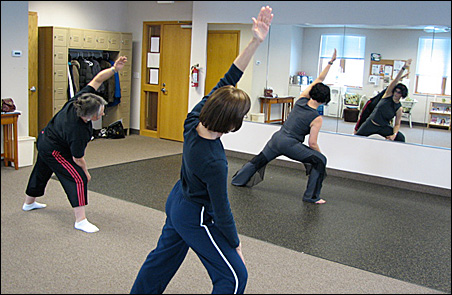 The women shimmied and stretched and twisted and twirled as they moved across the floor at the small White Bear Lake exercise studio.

It was strenuous, but not overly so, because the instructor had tailored the workout specifically for the participants, each of them a cancer survivor. One of the special touches: Extra care is taken when reaching and pulling, because some cancer survivors must work gradually after surgery to increase their range of motion.

The class was held at Survivors’ Studio, which may be the only exercise club in the nation catering only to female cancer survivors. It opened in early January, the brainchild — or mission — of Wendy Rahn, a University of Minnesota professor of political science, who is recovering from breast cancer surgery.

Exercise’s role in aiding cancer recovery surprised prof
Rahn, who is no stranger to research in her profession, delved deeply into the cancer literature after receiving a breast cancer diagnosis in 2006. Startling to her was research first published in 2005, and followed up since, that shows that regular exercise plays an important role in recovery.

Exercise and fitness long have been taught as a way to prevent cancer, but these studies showed that exercise after diagnosis and treatment was very important, too.

One key finding from the August 2006 issue of the Journal of Clinical Oncology: “Colorectal cancer patients who increased their [physical] activity from their levels before diagnosis had an approximately 50 percent reduction in both colorectal-cancer specific and all-cause mortality.”

Another, from the May 25, 2005, Journal of the American Medical Association: “Conclusions: Physical activity after a breast cancer diagnosis may reduce the risk of death from this disease. The greatest benefit occurred in women who performed the equivalent of walking 3 to 5 hours per week at an average pace, with little evidence of a correlation between increased benefit and greater energy expenditure. Women with breast cancer who follow U.S. physical activity recommendations may improve their survival.” 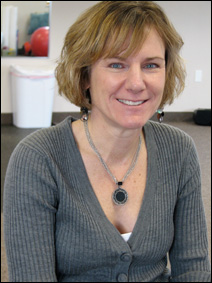 Dr. Douglas Yee, director of the University of Minnesota Cancer Center and a breast cancer physician and researcher, said that additional research is necessary to quantify a direct correlation between exercise and improvements in cancer recovery. But he sees absolutely no downside in exercise for survivors.

“Will it help? All the observational studies suggest women who exercise have better outcomes, but it’s always a challenge to assign improvement to that activity, as opposed to something else,” Yee said. “Women who choose to exercise often have better overall health habits, so it may not be directly due to exercise that survivors do better, but because of those overall better health habits.”

Cautions about exercise often not valid, doctor says
In the past, he said, some cancer survivors, particularly those who had breast cancer, had been warned not to exercise because of concerns about arm edema, or excessive accumulation of fluids, because lymph nodes have been removed. However, that is not a valid concern, Yee said.

“We conducted a study here [at the U] several years ago, comparing women who did strength training after cancer surgery and those who received the usual care, and didn’t see any adverse affects from the weight training,” he said.

So, based on all her research, Rahn hired a personal trainer soon after her double mastectomy “to make sure I was doing things right,” she said.

“I’ve always been interested in fitness, but not always active. [Especially after the birth of her son nine years ago, she said.] But working out after the surgery, I felt happy and strong. And I knew that I wanted others to know what I’d found,” Rahn said.

At first, the plan was to develop an educational website, citing the studies and findings that herald the advantages of exercise for survivors. “But then I figured it wasn’t enough to just have the information, I thought it would be great to offer classes for survivors, too,” she said.

Looking for a place to offer exercise classes for survivors, Rahn learned that the White Bear studio would be available in January for sublease. And her concept began to take shape.

For a $30 monthly fee (soon to increase to about $40), members can attend classes in yoga, Pilates, NIA (a movement and music class). There are also nutrition and lifestyle classes, along with walking groups and personal training.

Margaret Wiley of North Oaks said she came to the gym to “make a commitment to myself.”

Recovering from breast cancer, she said she wanted to work back into shape. “And I feel more confident in a class with all cancer survivors, working with people who know what our bodies can and cannot do.”

Loretta Seitz of Dellwood, who has battled ovarian cancer but is now cancer-free, said she, too, feels more confident in an exercise class made up of cancer survivors.

“It’s all about joy in this setting; it’s a positive experience, and I feel like I’m moving forward. I’m not being labeled by others, and I do what I can,” she said. “There’s no need to push to discomfort.”

Yee said the group aspect, especially with all members being cancer survivors, can be important for motivation and self-esteem.

“I think it could be beneficial to be in a place where body image isn’t on the priority list,” he said. “The idea that you have to be in good shape to fit in often discourages some from starting an exercise program.”

Seitz said cancer survivors, like her, need to help themselves in their recovery. “We don’t get a prescription from the doctor requiring that we get enough exercise. We have to seek it out ourselves,” she said.

“Exercise is medicinal; oncologists should talk to their patients about it and refer them to places where they can exercise,” she said.

Trainers at the Survivors’ Studio have been coached in working with cancer survivors, Rahn said. Daniela Bell, who leads the NIA classes, said there is a slightly different focus in these classes.

“This is a place of healing, emotional, physical and spiritual,” she said. “There are other places that hold classes for cancer survivors, usually at hospitals or clinics. But here, there aren’t the negative emotions that some might have when going back to the hospital. Here, it’s all positive.”

Said Rahn: “Everybody here is cool with cancer. If you have no hair, or take a prosthesis off, you can still feel comfortable.”

And unlike other treatments, exercise done right, with supervision, should cause no harm to the patient, she said.

“Side effects? Let’s see, exercise fights diabetes and Alzheimer’s. Those are side effects we can live with,” she said.

Joe Kimball, a former columnist and reporter for the Star Tribune, reports on St. Paul City Hall, Ramsey County politics and other topics. He can be reached at jkimball [at] minnpost [dot] com.

Special event: Today, the studio is sponsoring a free 7 p.m. showing of the HBO film “Dear Talula” at the White Bear Township Theaters. Filmmaker Lori Benson will be there to discuss the film, which deals with her reaction to a diagnosis of breast cancer. Click here for ticket information.