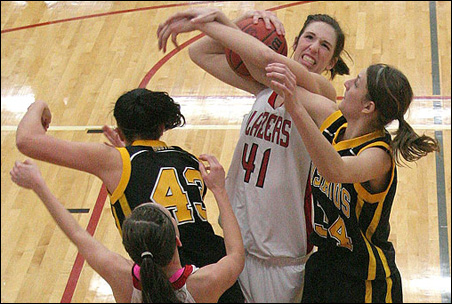 They didn’t believe her. That was the most frustrating part for Danielle Frank. Time after time, she described her symptoms to doctors and nurses: When she played sports, occasionally her heartbeat accelerated like a motorboat engine, and she felt lightheaded.

But when she took stress tests, or was hooked to a monitoring device, nothing like that happened. So what could it be? Asthma? Anxiety? Maybe nothing at all? At times, the freshman basketball player at the College of St. Benedict wondered if even her parents doubted her.

“They thought I was lying,” Frank said. That made her mother, Jean, uncomfortable. They sat last Saturday afternoon on a couch at the Robertson Center at Bethel University, about three hours before Danielle, a St. Ben’s freshman, played the best game of her fledgling college career.

“I don’t know if we thought she was lying,” said Jean Frank, a registered nurse. “But we thought it was certainly possible there was a problem. Unless you capture it, you don’t know what it is.”

Not until shortly after Christmas, when Frank suffered a spell at practice while wearing a monitor, was it finally diagnosed. Dr. Zalmen Blanck, a cardiac electrophysiologist who treated her at Gundersen Lutheran Medical Center in La Crosse, Wis., said Frank had supraventricular tachycardia (SVT), a heart rhythm disorder caused by an abnormal electrical impulse from the heart’s upper chambers. There can be many causes, but in Frank’s case, a small abnormality in her heart needed to be repaired.

30-minute procedure solved perplexing problem
The fix, fortunately for Frank, did not require major surgery. Frank underwent a 30-minute procedure on Jan. 24, which involved running a catheter through her groin and up a vein into her heart.

Her recovery was nothing short of remarkable. Though cautioned to take it easy, Frank practiced briefly the next day, then started and played 29 minutes in a two-point loss at St. Mary’s on Jan. 26. Frank finished with 14 points and 12 rebounds.

“I was sore, and I was afraid,” Frank said. “But at the same time, I was so glad it was over with. It’s a big sigh of relief that I don’t have to worry about my heart rate going up really fast. I don’t have to have that in the back of my mind anymore. I was really excited.”

So was her coach, Mike Durbin, and her teammates. Last Saturday at Bethel, nine days after the procedure, the 6-foot-4 Frank scored 18 points, her season high, and added 15 rebounds in an 85-65 victory that kept the Blazers tied for first with St. Thomas in the Minnesota Intercollegiate Athletic Conference. On Monday, Frank — a quick center with good hands who leads the Blazers in rebounding and blocked shots — was named the MIAC women’s basketball player of the week.

“I was skeptical anything could be turned around that quickly, but it turned out to be true,” Durbin said. “It’s a miracle of modern medicine.”

Common condition often goes unrecognized
The doctor and the Frank family agreed to talk about Danielle’s treatment because, according to Blanck, many people have SVT and don’t know it. After a story about Frank appeared in the Winona Daily News, Blanck said he heard from another player in the MIAC who, it turned out, has the same thing. “It’s a very common condition,” he said.

Though not fatal, it can be as debilitating as a migraine headache, Blanck said. The surgical procedure dates back 20 years, and Blanck has been performing it since 1990. 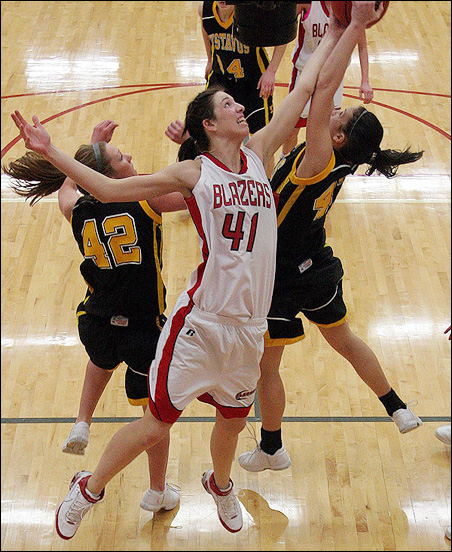 In a telephone interview, Blanck explained SVT this way:

Imagine the heart, he said, with its two upper and two lower chambers. The heart’s natural pacemaker, in the upper chambers, sends an electric signal down a nerve into the lower chambers, which triggers a normal heartbeat.

But Frank’s heart contained a second nerve that sometimes interfered with the signal, Blanck said. That can make the heart beat wildly for a short period of time, usually five to 15 minutes, and pump blood inefficiently. In the worst cases, it can cause a person to faint, though Frank said that never happened to her.

Diagnosing SVT properly, Blanck said, can be tricky. Sometimes the episodes are so short that the heartbeat returns to normal by the time the person can be seen by a doctor.

That was a problem for Frank, 18, who is from Caledonia, a small town in the southeastern corner of Minnesota near the Iowa and Wisconsin borders. She said she first noticed the accelerated heart rate in eighth grade. Her father, Ken, who coached Danielle in youth soccer, thinks it might have started earlier.

“I remember her coming to the sideline saying she was going to pass out, before eighth grade,” said Ken, the police chief in West Concord, Minn.

Originally, Frank was told she had asthma and used an inhaler. “It didn’t help at all,” she said. “They thought maybe I was using it wrong. I was positive I wasn’t.”

Next, as a ninth-grader, Frank wore a heart monitor for 30 days. If she had an episode, she was told to push a red button so the monitor could record it. But none occurred. Stress tests, and an echocardiogram, also showed nothing.

Heart episodes recurred throughout high school
Even as she played multiple sports at Caledonia High — basketball, soccer, volleyball, track and golf — Frank said she kept having these episodes. They continued in her first semester at St. Ben’s. But she never told Durbin or the St. Ben’s training staff until December, when an episode forced her to leave practice for an hour.

Over Christmas break, Frank felt her heartbeat accelerate while exercising at home. This time, it happened just as her mother — who works at Gundersen Lutheran — walked in the door.

“I tried to take her pulse,” said Jean Frank. “I couldn’t count because it was too fast.”

They decided to see a doctor again. And again Danielle was asked to wear a heart monitor, about the size of a pager. During an early January practice, Danielle felt her heart racing and pushed the button. “My heart rate was going 220,” Danielle said. “I thought that was mild.”

The family was referred to Blanck, who is based at St. Luke’s Medical Center in Milwaukee and sees patients at Gundersen Lutheran once a week. Blanck quickly realized what he was dealing with.

Blanck gave Frank two treatment choices: Have the procedure, or take medication the rest of her life. Frank chose the procedure, in which the extra nerve is identified and burned off.

“You have to find the spot,” Jean Frank said. “We were afraid they were going to come out and not find the spot.” But Blanck did, without complication.

“I was very concerned,” Durbin said, “but at the same time, I was reassured by the family that this would be a relatively simple procedure.”

Afterward, Blanck said the biggest potential trouble spot isn’t the heart, but the catheter’s entry point in the groin, which can bleed. Otherwise, Blanck said, Frank could resume athletic activities at whatever pace she could handle comfortably.

Frank made quick comeback from procedure
When Frank returned to the St. Joseph, Minn., campus the next day, Durbin told her to take it easy at practice if she wanted to play against St. Mary’s. Durbin intended to limit her minutes and play her in short bursts. But Frank, though sore, kept saying she was fine, and Durbin ended up using her about 10 minutes more than he intended.

The willowy Frank’s inside presence complements the Blazers’ up-tempo style. She averages 8.6 points and 9.6 rebounds for St. Ben’s (16-4, 14-3 in the MIAC), and her 58 blocks are second-most in the MIAC. She is the conference’s No. 3 rebounder.

Durbin, the most successful women’s coach in MIAC history with 388 conference victories and 486 overall in 22 seasons, said he has never had a first-year player improve as much in four months as much as Frank has.

And now, whenever Frank hustles back on defense and tries to catch her breath, Durbin need not look at her any differently than any other player.

“From my standpoint, there’s a sense of relief,” he said. “Not only is she happy and healthy, but I don’t have to worry about it. Of course, it’s always in the back of your mind. I have a child, and I recognize how a parent is always concerned about their kids.”

Especially the kid who, as it turned out, was telling the truth all along.

Nine days after her perplexing heart problem is solved, she’s the basketball player of the week