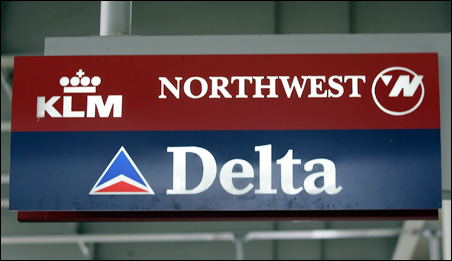 REUTERS/Rebecca Cook
An interesting juxtaposition: Will this be the new sign of the times?

With formal news of a planned merger between Northwest and Delta airlines maybe hours away, Minnesota is bracing for a potential triple whammy:

The biggest impact, according to critics of such a deal, may be the severe toll it could take on customer service and competition in the airline industry.

Those fears have prompted opposition from 8th District Rep. Jim Oberstar, the powerful chairman of the House Transportation and Infrastructure Committee, who has vowed to do whatever he can to shoot down any such deal. A merger also would need the approval of the Department of Justice.

With reports that the Delta board will review a possible deal on Wednesday, observers are worrying that such a merger could reduce consumer choices and boost airfares.

Oberstar’s “primary concern is that this merger will create a colossal carrier, and that it’s going to lead the other carriers to look at their own mergers in self-defense,” said Oberstar spokesman John Schabl. “Consolidations are not going to create competition.”

The Democratic congressman from Chisholm believes the Delta-Northwest merger would be the first domino to fall in a wave of airline consolidations, Schabl said.

He may be right. United Airlines CEO Glenn Tilton told analysts earlier this month that consolidation is “important … for the industry to be successful.”

Continental reportedly has been in merger talks with both United and American airlines. The merger chatter has pushed up airline stock prices across the board an average of 34 percent since January.

Merger track record not good for consumers
Denver-based airline analyst Mike Boyd agrees that merging the two airlines is a bad idea, both for consumers and the industry. “A merger is involved in providing less, not more,” he said. “I’m not anti-merger [but] they just don’t do what people claim they do, and they never have.”

He points to an aborted 2006 plan to merge Delta with US Airways, two highly competitive airlines with many overlapping routes along the East Coast. Had that merger happened, Boyd said, competition would have been eviscerated at such airports as Washington, D.C.’s Reagan International, Boston’s Logan and New York’s La Guardia.

“The Delta-US Airways merger idea was a total fiasco,” Boyd says. “It would have reduced competition for probably two dozen cities, down to nothing.”

In this case at least, most observers think the Minneapolis-St. Paul International Airport will survive as a hub, a key concern among businesspeople and leisure travelers wanting easy, direct access to popular destinations. They see the two airlines’ routes are complimentary rather than overlapping, so consolidation would be a plus for both companies.

Airline mergers historically have led to extended periods of ragged customer service, including spikes in the number of flight delays, lost baggage and ticketing glitches. Last year, US Airways experienced outages in its self-service kiosk system that passengers use to retrieve their boarding passes. The problem forced passengers to wait in long lines at undermanned service counters and resulted in many delayed flights.

The outage was tied to a failure in the integration of reservation systems used by US Airways and America West, airlines that had merged in 2005.

Yet another problem that tends to plague merged airlines stems from combining workforces. A year after Northwest Airlines merged its 17,000 workers with Republic’s 16,000 employees in 1986, only 69 percent of the merged airline’s flights were arriving on time, largely because of labor problems. By November 1988, the number had rebounded only slightly, to 73.8 percent, according to a 1989 New York Times report.

By comparison, the airline industry as a whole reported an 80 percent on-time arrival rate in 2007, according to the U.S. Department of Transportation. Delta was one of the top performers, reporting that 85.6 percent of its 2007 flights arrived on time.

Labor problems tend to linger
There is some reason to hope that any inconvenience caused by glitches in technology will be short-lived and transitory, said airline analyst Robert W. Mann of R.W. Mann & Co. in Port Washington, N.Y. But post-merger labor issues problems have a potentially long shelf life, he said.

For example, US Airways and America West have been struggling for two years to consolidate their pilots’ seniority lists, said Mann, who has worked as an adviser to the America West pilots. In that case, an arbitrator ruled that many US Airways pilots with as many as 15 years of tenure would rank below some America West pilots whose tenure began as recently as 2004.

Most post-merger issues that arose after the US Airways-America West consolidation were resolved a year ago, Mann said. But the fallout from consolidating seniority lists is an ongoing problem, he said, and a Delta/Northwest merger could result in similar troubles.

“What happens is that when you cancel a flight aboard a 150-seat airplane — which is a mainline airplane — [airlines] often replace it with two smaller regional aircraft,” Mann said. “They cut the number of seats involved, but they actually increase the number of aircraft flying. The result is that you actually exacerbate the known congestion problem by putting more aluminum tubes in the air.”

If true, that would do little to quell the concern of residents near the airport, who have for years complained about high noise levels from takeoffs and departures.

“I frankly think consolidation will be a very bad outcome for consumers,” Mann said.

Boyd disagrees with part of Mann’s assessment, saying that the trend in aviation is toward airlines purchasing and flying larger planes, not smaller ones. A merger wouldn’t change that, he said.

Financial impact in state weighs heavy
Minnesota leaders also are wary of Northwest’s track record of keeping promises, the extent of potential job cuts and the resulting impact on the state’s long- and short-term revenue picture.

When the state bailed out Northwest to the tune of $761 million in 1992, the airline promised to build an engine maintenance facility in Hibbing with a minimum of 500 jobs, in addition to maintaining three airline hangars in Duluth that would employ a minimum of 1,000 workers. It also pledged to keep employment levels in the state at then-current levels of 18,000 employees — a number that has since fallen to about 12,000.

In 1994, the original deal was renegotiated, markedly scaling back the promises. At that time, the airline scrubbed plans for the Hibbing maintenance facility, and pledged instead to hire only 350 workers at the Duluth maintenance base, though it also promised to keep them there for at least 30 years. The airline also agreed to build a reservations center on the Iron Range.

The reservation center was built in Chisholm and today employs about 500 workers. However, the Duluth operations closed in 2005 during a mechanics strike, and the site has not reopened.

Northwest still owes $245 million to the Metropolitan Airports Commission from that loan, according to its chairman, Jack Lanners. That gives the state considerable clout in its quest to keep Northwest from further reducing Minnesota operations, even post-merger, he said.

“If Northwest relocates their headquarters outside Minnesota, that requires payment of that loan in full,” Lanners said. “It would become due immediately. That’s pretty significant.”

At a news conference Monday that included key legislators, Gov. Tim Pawlenty said he is open  on renegotiating the terms of the agreements with Northwest.

However, given its track record, analyst Mann suggests that the state might be better served simply taking the money.

Minnesota Senate President James Metzen admits that there is something enticing about the prospect of taking the money and releasing Northwest from its obligations. “That would be possibly a good result. That $245 million to a state facing some financial troubles here could help.”

But it’s not enticing enough, the senator said. “I don’t want that,” he said. “I want them to stay, of course.”

Post-merger job losses inevitable
Post-merger job losses would be inevitable, although no one knows exactly how many of Northwest’s 12,000 Minnesota employees would leave. But given Delta CEO Richard Anderson’s insistence that the merged airline would be based in Atlanta, Northwest’s Eagan headquarters and many of the 2,300 who work there and at other Eagan facilities would probably disappear.

“I think there are no ifs, and or buts about it,” said Terry Trippler, a Minneapolis-based airlines expert. “The headquarters are going to move. It’s going to hurt. You’re going to take that money out of that community.”

Beyond the potential loss of headquarters jobs, “The vast majority of the Minneapolis/Twin Cities-based employees would not be affected [by a merger], because they are more involved in the hub operations,” said Bill Hochmuth, a senior research analyst at Thrivent Financial for Lutherans and expert on airline operations.

But not everyone is so confident. Metzen, chairman of the Senate Jobs and Economic Development Committee, is “nervous and scared” about what the merger might mean economically to his home district, which encompasses Eagan, Mendota Heights and South St. Paul, and for the state as a whole.

Blazar agrees that, even if the airport retains its hub status, some airport jobs might be at risk. “You can have the hub without having the same degree of maintenance activity that we have now,” he said. A merged airline, he said, might well choose to shift some maintenance jobs out of the states.

A merger also would likely result in the loss of the 500 jobs at the Chisholm-based reservations center, says Bill Blazar, senior vice president of the Minnesota Chamber of Commerce. “And that’s a big piece of diversity in the Iron Range economy,” Blazar said. “When you merge, those are the kinds of operations that maybe get lost in the deal.”

Michael Jugovich, Chisholm’s mayor, says the reservations center, which opened in 1994, has been a blessing for the job-starved Iron Range. It provides solid living-wage jobs to citizens of Chisholm, Virginia, Hibbing and other nearby communities.

“We’re watching. We’re sitting on the edge of our seats and we’re hoping everything works out for the best,” Jugovich said. “Unfortunately, there is not much choice. There is not a lot we can do.”

With a merger of Delta Air Lines and Eagan-based Northwest Airlines looming, Rep. Jim Minnesota Oberstar — the top Democrat on the House Transportation and Infrastructure Committee — spoke to MinnPost about his opposition to such a deal and what he can and can’t do to block it.