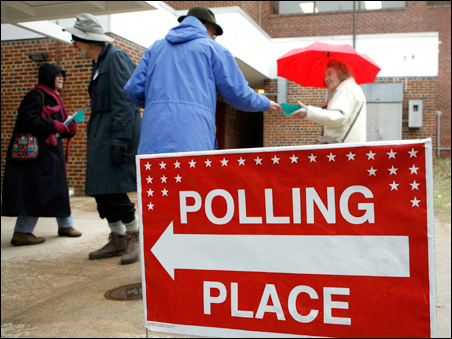 The more they run against each other, the closer the race becomes between Democratic Sens. Barack Obama and Hillary Rodham Clinton. But now — after large victories in the Potomac Primary in Virginia, Maryland and the District of Columbia — Obama has finally inched ahead in the delegate count.

CNN was reporting that including superdelegate estimates, Obama had more delegates pledged than Clinton. Other news organizations had different numbers. But the point was the same. (Read Eric Black’s piece on delegate disparities.)

“Suddenly, against all odds, the once-mighty Clinton campaign is beginning to feel like the last days of Pompeii,” veteran New York Daily News reporter Thomas DeFrank wrote Tuesday before the results were even in.

“Clinton spin notwithstanding, there’s no disputing Obama is surging and Hillary is struggling. If you believe in the momentum theory of politics, that bodes ill for Clinton. Her high command’s insistence the race turns around decisively in Ohio and Texas on March 4 sounds eerily like Rudy Giuliani’s disastrous wait-till-Florida turnaround strategy.”

In the Republican primary in Virginia, Maryland and the District of Columbia, Sen. John McCain defeated former Arkansas Gov. Mike Huckabee, but it was closer than some thought it might be in Virginia.

It’s the economy, in both parties
The economy was the key issue in both parties’ primaries, according to exit polls. The New York Times reported that “almost half the Democrats who voted (in Maryland and Virginia) considered the economy the most important issue facing the country. About one voter in three worried more about the war in Iraq, and about a fifth were most concerned with health care.

A third of the Republican voters in Maryland and Virginia said they were most concerned about the economy, the Times reported, while the war in Iraq, illegal immigration and terrorism were each cited by about a fifth of the voters.

The Times said Obama won the overwhelming majority of black voters in Virginia “while white voters were more closely divided. But while Sen. Clinton was backed by a majority of white women, most white men chose Mr. Obama, although Mrs. Clinton still got the votes of a majority of all whites over 45. White Democrats gravitated toward Mrs. Clinton, while white independents preferred Mr. Obama.”

CNN reported that “Obama was expected to poll well among young voters, independents and African-Americans and he did — taking 60 to 70 percent of the votes in the first two groups and nearly 90 percent of black voters, the polls suggest.

“But he also was edging out Clinton among voters 65 and older, blue-collar workers and women, all groups that Clinton was counting on as the core of her support.”

The BBC’s Jamie Coomarasamy put the election in perspective before the votes were cast in the Potomac Primary: “Timing is everything. And the voting in the states closest to the White House is taking place at what could be a pivotal point in the race for the Democratic Party’s nomination. Barack Obama has the wind in his sails after a highly successful weekend, which saw a string of resounding primary and caucus victories. For Hillary Clinton, it is a time of introspection and transition.”

Clinton chooses to look forward
Neither Tuesday’s results nor the breakdown of where the votes came from were particularly promising for the Clinton campaign, which was on to Texas and perhaps a more positive future. In a blog, New York Times reporter Katharine Seelye described the scene:

“Mrs. Clinton finally takes the microphone. Behind her, in the tight camera frame, are mostly young, Hispanic women. …”

Then Clinton tells the audience: ” ‘We’re going to sweep across Texas in the next three weeks, bringing our message about what we need in America,’ she says, saying she’s ready to be president on ‘day one’ and can ‘turn the economy around,’ then gives the sound bite you’ll see a lot tonight: ‘I’m tested, I’m ready, let’s make it happen!’ “

Meanwhile, Obama was in Wisconsin last night; he is favored in next Tuesday’s primary there a couple of weeks before the showdowns in delegate-rich Texas and Ohio, where Clinton is hoping to do well.

In a race this tight over such a long time, even with Obama now in the lead, slightly, it would be silly to count out Clinton and her campaign. “Like most politicians, Bill and Hillary Clinton are smart, driven, ruthless and often shameless. That’s why they win. It’s never a safe bet to underestimate them,” cautioned the New York Daily News’ DeFrank.

Political wisdom says that because of the arduous nature of the Democratic campaign, McCain, soon to wrap up his nomination, will now have time to rest and fundraise to the disadvantage of the Democrats. Not necessarily the case, argues Dan Balz of the Washington Post:

“The Democratic race has captured the country’s attention, and McCain will find it hard to get much attention as long as that battle continues. If it ends in a civil way, the Democratic base will be energized and enthusiastic. Obama and Clinton also will gain potentially valuable exposure in some upcoming general-election battlegrounds that McCain may not. Democrats may worry about a long contest damaging the party’s chances in November, but some Republicans doubt this is going to be a major factor come fall.”

Democratic delegates -- by the numbers