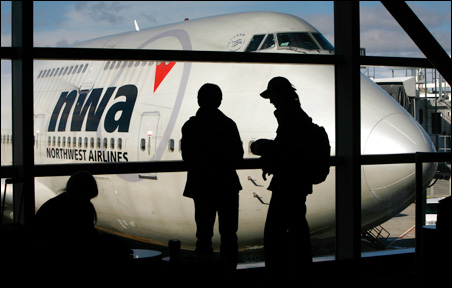 Rumors suggest that merger negotiations between Delta Air Lines and Eagan-based Northwest Airlines, which would create the largest U.S. airline, are down to the details: moving headquarters to Atlanta, the disappearance of the Northwest name and diversion of investment from Minneapolis-St. Paul International Airport to nearby hub Detroit Metropolitan Airport.

With the merger looming, Minnesota Rep. Jim Oberstar spoke to MinnPost about his opposition to such a deal and what he can and can’t do to block it.

Oberstar has represented the Eighth District  —  Duluth, the Iron Range and arrowhead  —  since 1974, making him the seventh-most senior Democrat in the House. He has been the top Democrat on the House Transportation and Infrastructure Committee, which oversees highways, waterways and the airline industry, since 1995. He became chairman when the Democrats took power last year. From that post, he has been gathering and updating data on the airlines and the effects of concentrating power at airport hubs.

MP: What do you think the chances are for a Northwest merger in the near future?

OBERSTAR: Clearly, Delta is pursuing a merger with Northwest, and has announced at the same time that it is pursuing talks with United. In my judgment the real serious target is Northwest, and that Delta has probably raised the United prospect as a diversion away from their interest in Northwest. I think these talks are serious, they’re proceeding, and from little bits of information coming from the inside by unnamed, unidentified sources, they’re moving along at a fairly good pace and likely will have an announcement in the next week or two weeks.

MP: What would this mean for the Twin Cities?

OBERSTAR: Let’s start with the national aviation picture. This will not be an isolated activity. A Delta-Northwest or Delta-United merger would be followed in very short order by consolidation of other carriers that would result in maybe three global mega-carriers left from deregulation. That would mean fewer options for air travelers, lowered quality of service, higher airfares, probably fewer choices, job losses, and in the extended economic downturn we’re experiencing right now, much bigger bankruptcies than we’ve seen in the past.

But the real damage will be in deregulation. We enacted deregulation in 1978, and I voted for it, with trepidation  —  but with confidence that Carter administration Justice Department would vigorously enforce the antitrust laws and assure that new-entrant competitors would not be swallowed up or otherwise driven out of the marketplace by the incumbent carriers. In the first five years after deregulation, from 1978 to 1983, there were 22 new entrants into airline competition. About eight years later, there were only five of those carriers left, and by 1990 there was only one left. And it’s gone as well. [America West, which merged with US Airways in 2005.]

Along the way, those new-entrant carriers – some were underfinanced, some were badly managed – they fell by the wayside. Others were swallowed up – there have been 22 mergers in the last 20 years, and most of those occurred before the Clinton administration came into office. The Reagan Justice Department and Bush I Justice Department hardly met a merger they didn’t like, and that’s what I fear is going to be the situation with this Justice Department. The problem with the antitrust law is not that it’s a bad thing but in this situation, in aviation, they look only at the instant case. They don’t look at the consequences in the marketplace of consummation of this merger proposal. That should be the role of the Department of Transportation. In another administration, a Department of Transportation vigorously pursuing and defending the public interest would look at the consequences of a Delta-Northwest merger, which would result in a cascade of mergers as other carriers joined together to create a bigger competitor to what would then be the world’s biggest airline. And the Department of Transportation should be pointing out the dangers of a merger, the consequences in the marketplace, and I don’t see them doing that. So we’re doing that on the committee.

Air travelers in the wake of a consummated Northwest-Delta merger can expect fares to rise, destinations to be significantly changed. Cities at the end of the spokes in the hub-and-spoke era of aviation will be vulnerable to service cuts as the airline has total economic power and can tell travelers at International Falls, Chisholm, Thief River Falls, Bemidji: “Well, we don’t care how you get here. This is where we’re going to fly. You figure out how to get here, to Minneapolis-St. Paul, and then we’ll carry you off to the ends of the Earth.” And they would not do that if there were competition. But there isn’t going to be competition against them. That is the pattern that has followed previous mergers.

MP: If a hub like Memphis were eliminated, what would that mean for the Twin Cities?

OBERSTAR:  It doesn’t enhance the Twin Cities at all. If I were FedEx I’d be concerned about losing the Memphis hub. FedEx is probably [Northwest’s] biggest customer out of Memphis. Downsizing Memphis does not enhance MSP. It just means a bigger carrier like this is going to take costs out of the system. They can protest all they want and put a good face on it right now and say, “Oh, we’re not head-to-head, these are complementary routes,” but we’re going to have consolidation, read: Unemployment.

MP: How about some of the obligations that Northwest has made to the state?

OBERSTAR:  About nine years ago American was interested in acquiring Northwest. They thought it would be a good fit for them. Their top people came in to see me about it. They wanted to know about the financial ties of Northwest to the Metropolitan Airports Commission [MAC] and other commitments to the state. I laid it out for them, and the $380 million MAC loan had been drawn down at that point to about $360 million. And they said “Well, that could be paid off.” I said, “That’s correct.” They said: “We’d pay that off in a heartbeat. We don’t want to have any limitations.”

Delta is flush with cash; they’ve had a very profitable last year; they’re making better money than they have any time just prior to and during bankruptcy. [Delta CEO and former Northwest CEO] Richard Anderson knows the legal details of all of that. He was there on the inside. He was a voice for Northwest. That obligation now is down to around $245 million – they’d buy it out in a heartbeat. Then the state has no leverage, except some feel-good public sense of moral obligation, but they don’t have a moral obligation in this business. Especially not when they’re the thousand-pound gorilla in the marketplace.

MP: So is there anything that would hold them there?

OBERSTAR:  The governor is appropriately considering a set of incentives and encouragement to the new Delta, and that’s appropriate, that’s what he should do. But I doubt if there is anything they would want to undertake that would limit their ability to cut jobs, cut costs, cut service. While it’s appropriate for the governor to do all these things, it’s going to be a very difficult sell.

MP: How about your own role? What’s at your disposal?

OBERSTAR:  We’re going to do as we’ve done in the past, hold hearings, publicize the issues, raise these concerns, raise the factors that I’ve already mentioned. We’ve been gathering data well in advance of this particular instance, gathering data in my own anticipation that there would be a movement toward consolidation in the industry. We’re very far along; GAO’s been doing a great deal of work for us. We’ll compile data to submit to the Justice Department to urge them to evaluate these factors. We’ll engage the U.S. Department of Transportation and insist they perform their responsibility to the public interest. And we’ll keep it going as long as we can to stretch this thing out.

MP: But it sounds like your authority, and the Justice Department’s role, may be pretty limited.

OBERSTAR:  Our role is the broadest public interest. The Justice Department’s role is to look at the antitrust implications of a merger proposal. Our goal would be to widen their perspective, widen their scope of interest and present compelling evidence of harm in the public interest that would result from the merger. Even though they are not required to consider consequences which would in their strict legal view be speculative, we have to get them to think that if this merger is approved that there would be other mergers, and this will set a precedent for others to follow, and they have to be careful. And that could cause them to spend a good deal more time thinking about it than they otherwise do.


Adam Graham-Silverman covers foreign policy and economics for Congressional Quarterly in Washington D.C. and is MinnPost’s Washington correspondent. He can be reached at agrahamsilverman [at] minnpost [dot] com.

From the Airline Observation Deck

With ongoing consolidation talks between the two giant air carriers, most onlookers are predicting a formal merger in which Delta acquires Northwest. Such a move, however, raises economic uncertainties that affect area communities, workers and airline passengers.

“An airline with a broader national and worldwide route structure under one name and corporate structure would be in a strengthened position, and costs would ultimately be saved through eliminating overhead and having greater purchasing power with suppliers.”
—  Ray Neidl, an analyst for Calyon Securities

“Jim [Oberstar] was asked his response on the merger earlier in the week, and he said, ‘Hell no.’ “That’s going to lead the other carriers to look at their own mergers, in self-defense. [He] doesn’t feel that large, consolidated operations like this are going to serve the traveling public.”
—  John Schadl, spokesman for Eighth District U.S. Rep. Jim Oberstar, the powerful chairman of the House Transportation and Infrastructure Committee

A merger is “a major issue” [for Minnesota’s economy]. “We should all be concerned.”
– U.S. Sen. Norm Coleman, who said he is monitoring the situation closely and has been in frequent touch with Delta CEO Richard Anderson, who led Northwest between 2001 and 2004

“I frankly think it will be a very bad outcome for consumers. There is a lot of urgency, which has been fanned over four years of consolidations. Essentially, it’s wink-wink, nod-nod, let’s cut capacity. Let’s improve our pricing power. Let’s hit the gouge button a couple of times, just for effect.”
—  Robert W. Mann, president of R.W. Mann & Co., an airline industry analysis and consulting firm in Port Washington, N.Y.

“I think now as it has moved along, it is more or less a merger [that is shaping up].”
—  Terry Trippler, a Twin Cities-based aviation analyst, who is convinced that a merger would mean that Delta buys Northwest.

“A merger is involved in providing less, not more. These two airlines very likely, I think, will be putting something together that . . . will be bigger than it was before, not smaller. Oberstar would be toothless from that point of view, and he’d probably back off then, anyway.”
—  Mike Boyd, a noted aviation consultant and analyst based in Denver, Colo., who believes the final plan could be a mega-alliance, similar to the 2004 Air France-KLM deal, rather than a merger.