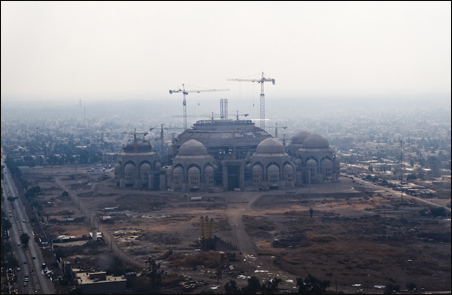 MinnPost photo by John Camp
Aerial view of a mosque in Baghdad, Iraq

MinnPost journalists John Camp and Eric Bowen traveled to Iraq in early January and were embedded with the 2-147th Assault Helicopter Battalion of the Minnesota National Guard in Balad. Their reports capture the daily life of war — from the sights and sounds of a hectic hospital unit to the excitement of a helicopter mission into Sadr City.

John Camp, who won a Pulitzer Prize in 1986 for the Pioneer Press, is a best-selling novelist who writes thrillers under the pen name John Sandford. Bowen, a photojournalist, previously traveled to Iraq in February 2007 to report on Minnesota soldiers for KSTP-TV and other media.

John Camp explains why he is going to Iraq

What would possess a best-selling novelist, who made his mark in journalism years ago, to spend a couple of weeks in a war zone in January? His answer comes down to what drives most journalists — a curiosity about the world around them.

In search of journalists

There aren’t a lot of news organizations willing to invest in front-line coverage of the war in Iraq — and that’s part of the reason I came here in the first place.

To get to Baghdad, Camp and Bowen endure dust storms, bureaucratic entanglements and a ride on the ‘Rhino’

The biggest problem with getting into Iraq is exactly how to get there.

The Army is willing to take you, but there are all kinds of exceptions and difficulties: getting on a manifest for the unknown numbers of flights coming in and out, scheduling conflicts, rank consideration — rank can and does bump prospective travelers off military transportation.

Amid pounding noise and occasional indirect fire, Minnesotans in Iraq live with the routine of war

As part of an assault helicopter battalion in Iraq, Minnesota National Guard members plug through the daily routine of war — and keep a bunch of Blackhawk helicopters in the air.

Some of the deployed soldiers look forward to returning to their regular jobs. But not everyone.

The trauma of war: Daily life at a U.S. hospital unit

At busy trauma hospitals in Iraq, doctors and nurses scramble to quickly treat the soldiers, Iraqis, children and sometimes even insurgents injured by war. “Mass casualties are not a ‘what if’ situation, it happens regularly” in Iraq, says one hospital surgeon.

The two Blackhawks dropped out of the hazy sky over Baghdad and headed for a tight landing in an obscure courtyard in Sadr City, a place Blackhawks don’t often go. They’d been sent to get an unspecified but “important” package. Here’s an inside view of the mission, moment by moment.

Balad is a small American city of a specialized kind, with firefighters, truckers, PR men, store clerks, bureaucrats, doctors and so on. But of all the groups and units at Balad, maybe the coolest is what the Army calls the C/7-101st Aviation Regiments, and everybody else calls the “medevac guys.”

PHOTO SLIDE SHOW: What life is like for medical personnel

PHOTO SLIDE SHOW: What life is like for the fuelers

Trip to Ur: magnificent archaeological site and a weird mix of cultures

PHOTO SLIDE SHOW: A trip to Ur, Iraq

The women of the Minnesota-based 2-147th Assault Helicopter Battalion didn’t set out to prove anything, says Capt. Andrea Ourada, but in the end their Dec. 25, 2007, mission was one for the record books.

VIDEO: Take a ride with the women of the 2-147th Assault Helicopter Battalion

After almost four years operating out of a collection of tents, the Air Force Theater Hospital in Balad, Iraq, recently moved into a new permanent facility that feels like a small regional hospital. It’s one example of how things have changed in Iraq since my last trip there.

At the highest levels of our government there is no official vision for how long we will be in Iraq. But the facts on the ground seem to show that individual agencies and local commanders have drawn their own conclusions and are planning for the U.S. military presence to last indefinitely.

Snapshots at U.S. base in Iraq: A big voice, farmer with mortars and menacing guards

A woman with a very big voice and a loudspeaker annoys everyone. Rumors abound about farmers who fire mortars using ice cubes. And private security guards who look like they could pull your arms off are everywhere. This is life at a U.S. base in Iraq.

VIDEO: Life on base in Iraq

Is the war in Iraq becoming winnable?

A lot has changed since my first visit to Iraq, most notably there is a sharp decline in the number of injured soldiers.

Our reports from Iraq

By John Camp and Eric Bowen