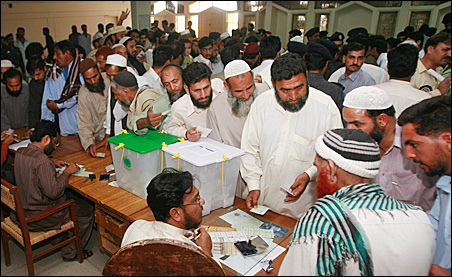 It will be days before the results are known, and it may never be clear if today’s voting truly reflects the sentiments of Pakistan’s voters. Still, millions trekked to the polls hoping their voices will be heard. The government said that all was going smoothly, although Pakistan’s Aaj television reported than 10 people had been killed and 60 wounded in the first hours.

In the eyes of many, today’s voting is a referendum on President Pervez Musharraf, the former general who took power in a military coup more than eight years ago. Musharraf is strongly backed by the White House as a front-line ally in the U.S.-declared “war on terrorism.”

But, as reported by the Los Angeles Times, “his popularity is perilously low among his own people, who blame him for problems as diverse as the steep rise in prices for basic goods and the alleged manipulation of the judiciary to stay in power.”

“This election is our revenge,” poll worker Adil Mustafa, a member of Bhutto’s party, told the Times. Other election-day interviews portrayed a Pakistan deeply troubled and fearful that more bloodshed will follow, whatever the results. After Bhutto’s death on Dec. 27, the elections, which had been set for Jan. 8, were delayed in order to suppress a sympathy vote.

Teetering on chaos
Pakistan was called the world’s “most dangerous” place by Newsweek and the Economist. “They were only stating the obvious,” Al Jazeera said in today’s feature on the election. The Qatar-based new agency said that Pakistan, even with its nuclear arsenal, teeters on chaos. It suffered 58 suicide bombings last year – and several leading up today’s voting, including one in which 47 people were killed in the lawless frontier region along the Afghanistan border, where Osama bin Laden is presumed to operate.

The government marshaled more than 80,000 troops to protect polling places, but whether the troops were protectors or intimidators rested in the eyes of the beholders. Voters doubt not only the security of their polling places but the integrity of their election commission. On the eve of today’s voting, a civil-society organization claimed that nearly 10 percent of Pakistan’s 81 million registered voters were missing from the records and that millions of fraudulent voter identity cards were being circulated.

The commission denied improprieties, its director calling those charges “part of the psychological warfare of elections.”

An outright victory for Musharraf’s party would be extremely suspicious, given the president’s 15 percent approval rating in recent polls. Indeed, opposition parties are expected to try to impeach the president if they can form a government. “The national mood clearly indicates that political parties opposed to Musharraf will win a clear majority,” Hassan Abbas, a Harvard University political scientist told Bloomberg News. “Even in moderately fair elections, anti-Musharraf parties will have an upper hand.”

‘The king’s party’
Playing that hand was the subject of a post-election strategy meeting of opposition leaders, according to the Lahore-based newspaper Dawn. Asif Ali Zardari of Bhutto’s Pakistan People’s Party (PPP) and Nawaz Sharif of the Muslim League took park. A spokesman for the PPP said the two men discussed “strategies to stop the king’s party from stealing the vote.” Referring to Musharraf as “the king” shows the deep divisions and frustrations running through the country.

Parliament has 342 seats, including 10 held for non-Muslims and 60 for women. To keep Musharraf in power, or to impeach him, a coalition would need 228 votes (two-thirds). Only Musharraf’s party or Bhutto’s PPP could muster those numbers, according to Haider Ali Hssein Mullick, a policy analyst writing in the Washington Post. “If Musharraf works with the opposition, he can bring stability. However, if he decides to discredit the entire electoral process, Pakistan will plunge into anarchy. The second option is highly unlikely because the stakes are simply too high,” Mullick said.

American officials in Pakistan hope that the election provides a fresh opportunity for a new civilian government to rally the nation behind the fight against militants who threaten its security and stability, the New York Times summarized today. After rising frustration with eight years of military rule, Masharraf has “lost the support of the people and cannot fight extremism effectively without it,” the Times said. Facing a growing insurgency from the Taliban and Al Qaeda, as well as rising prices and escalating violence, the president is now deeply unpopular.

“No matter which party prevails, Musharraf, who has been Washington’s main partner in the campaign against terrorism for the past six years, is almost certain to emerge further reduced in the post-election skirmishing,” the paper concluded. “He is already much weakened after resigning as army chief in November, and a popularly elected prime minister with the backing of parliament will emerge as a competitive new force.”