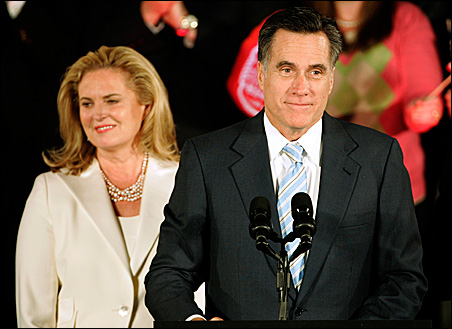 Budd Farley stumped with the rhetoric and fervor of a presidential candidate Tuesday night, urging his fellow Republicans in House District 55A to rethink their support for John McCain in the Minnesota caucuses. The 50-year-old Farley, an account executive with Comcast, asked the members of Maplewood’s sixth precinct to consider the top issues of the day while they debated in the cafeteria of John Glenn Middle School. Farley pulled hard for Mitt Romney.

“Is it the economy, or is it Iraq?” Farley wondered. “Is it the sanctity of marriage, or is it abortion.” Fewer hands shot up as Farley went down the list; the economy was almost universally the main concern among GOPers there on Super Tuesday. In the end, Farley couldn’t persuade enough of those in his precinct. McCain edged out Romney by two ballots, but Romney picked up about twice the votes in  District 55A by the end of the night.

Romney’s business bona fides played well with Minnesota Republicans, leading him to a decisive win, capturing 40 percent of the caucus vote Tuesday night, finishing well ahead of John McCain (just under 22 percent) andMike Huckabee (20 percent). But Romney’s capture of the hearts and wallets of the state’s GOPers — it’s the economy again, stupid — hardly gives him a clear shot in the general election. In fact, Minnesotans almost inverted the national story, where McCain came up big on Super Tuesday, standing now with 613 of the 1,191 delegates needed to win the nomination, compared with Romney’s 269 and Huckabee’s 190.

(And it says something about Minnesota’s feelings for Gov. Tim Pawlenty, who has been practically begging to be McCain’s running mate.)

In other words, Minnesota Republicans prefer a candidate who might not receive their party’s nomination. Romney and Huckabee certainly appeal to the party’s core conservatives who always come out to caucus, and also to the many newcomers who were out on a record-setting night. But conventional wisdom says that McCain is more electable in a general election in a state that has a legendary proclivity for voting Democratic in presidential races, and a long history of moderate Republicanism. McCain could do well here come November with moderates and so-called Reagan Democrats, but will the conservative base rally around him?

“McCain is a great man, but he’s too populist, and we do not need a populist president right now,” Farley said. “I’m not even thinking of supporting him right now.”

“I think people will come together at the end of the day,” said Brian Sullivan, the former gubernatorial candidate who is co-chair of Romney’s bid in Minnesota. “The feeling is whoever wins the nomination will be better than Hillary or Obama.”

Jack Meeks, the Romney campaign’s other chair, echoed that sentiment. “The party’s always fractured at this point, but that’ll heal,” Meeks said, before sounding a less-than-unified note. “We’re going to fight this all the way to the convention, but we’ll unite behind whoever the nominee is.”

Peter Hong, a local election guru working for Huckabee in Minnesota, still believed that his candidate could do well in the state, even as early results showed the former Arkansas governor running a close third behind McCain.  “He’s a multidimensional candidate who appeals to a lot of Minnesotans,” Hong said, adding that word of mouth among churchgoers and “home-schoolers” was still spreading for Huckabee.

And therein lies the rub: The evangelicals and other social conservatives who find one of their own in issues like religion, same-sex marriage and abortion were likely a big part of the Republicans who came out Tuesday, and they likely went for Huckabee and Romney. Should McCain get the party’s nomination — and that’s still not certain — it’s not hard to imagine those folks staying home rather than casting their lot with a candidate who is not particularly hewed to social issues.

Romney trumps Pawlenty, Coleman
Romney’s victory further splinters the state’s GOP party in one very public way: It’s a repudiation of Gov. Tim Pawlenty and Sen. Norm Coleman, the state’s two highest-profile Republicans, both of whom backed McCain. The Romney win could be seen as an embarrassment for both. At the very least, it shows that Minnesotans in their own party don’t give a whit what Norm and T-Paw say.

“It’s an exciting victory in that we were able to overcome the endorsements of the governor and the senator,” Romney co-chair Meeks said.

Meeks also pointed out another obstacle: A recent Minnesota Public Radio poll that showed McCain with nearly twice the support of Romney among Minnesotans. “That poll hurt us,” Meeks said, “and I’m proud we overcame that.”

But Ben Golnick, a top volunteer for McCain in Minnesota, still sees a silver lining in that poll. Golnick was in full spin mode late Tuesday, pointing out that Romney had paid staff in Minnesota and also paid a visit last week, while the McCain campaign was “100 percent volunteer driven” and the senator was a no-show. (Then again, the same could be said for Huckabee.)

“This is a beauty contest,” Golnick said, downplaying Romney’s victory, and pointing out that the votes are nonbinding. “All public polling puts us 20 points ahead; caucus night just brings out a small subset of voters.”

A good point, but one that has less currency on a night with record-breaking turnout and a number of first-time caucus-goers. Romney garnered some real support Tuesday. So, Golnick has his work cut out for him.

“It’s after the fact, and now we have to tell the state that McCain is the only one that can win in a general election,” he said. “That’s a big selling point.”

But no doubt some Minnesotans will need convincing. Brian Sullivan, for one, figured the best chance for any Republican in Minnesota might not even be up to the candidate who does get the nomination. “Minnesota still trends Democrat, so it could be hard to motivate the base,” he concluded. “But if Hillary gets the nomination, it might be cathartic and uniting. In some ways, Hillary is our best turn-out weapon.”