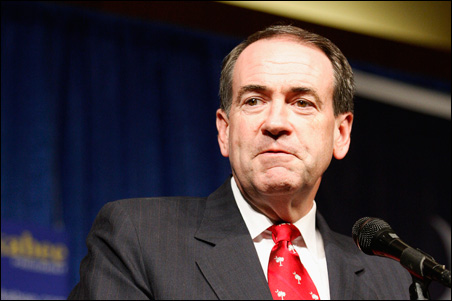 No question that Mitt Romney, now the latest casualty of campaign ’08, came out the winner on the Republican side in Minnesota’s caucus Tuesday. But who was the biggest loser?

One could argue John McCain, since polls had him leading by 20 percentage points in the North Star State, yet he finished behind Romney by almost the same margin. But no, the Arizona senator did too well nationally to be considered the biggest loser in Minnesota. You could say Mike Huckabee, but the former Arkansas governor managed to stay even with McCain with no money, staff or air time here. And Ron Paul just keeps being Ron Paul, good enough for a strong double-digit showing in the land o’ loons.

So, politically, the guy to suffer the most on caucus night would have to be Gov. Tim Pawlenty, right? I mean, the guv has been stumping all over the country for McCain, has all but American Idoled his way into the Veep spot on the ticket, and holds all Minnesotans enthrall with his “Let’s-play-hockey” charm and financial austerity.

Well, hold up on that last one … his endorsement of McCain meant absolutely nothing on caucus night. Conventional wisdom says that Minnesota will be a small but significant battleground state come the general election, and that McCain would have done well to turn a historically blue state red by picking the governor as his running mate.

But doesn’t Tuesday seal the deal? Pawlenty’s enthusiasm didn’t mean much to the party die-hards and first-timers who caucused, so how on earth could he convince people to vote McCain come November? It would appear that he can’t. And lord knows there are plenty of other VP candidates out there, not least of which is Mike Huckabee, according to the talking heads Tuesday night.

So, can Pawlenty kiss his dreams of playing wingman in the West Wing goodbye?

Not so fast, according to former U.S. Sen. Dave Durenberger. “I don’t know that his odds have changed one way or the other,” Durenberger said in call from Washington, D.C. Tuesday afternoon. “The question is: Which choice adds which dimension to the ticket?”

But what about the fiasco Tuesday night, when T-Paw hauled in scant support for McCain? Doesn’t that show that he’s lacking something?

“All it says is that Republicans like me didn’t go to the caucuses,” Durenberger said, “because they’ve taken over by people on the far right side of the party.”

Forget the conservative base?
A little back story here. Three years ago I interviewed Durenberger for a City Pages cover story where he became one of the first nationally visible Republicans to speak out against the extreme right-wingers who took over the party in the early part of the decade. Durenberger then was critical of Pawlenty, taking the governor to task for kowtowing to the right on all sorts of social and fiscal issues at the expense of good governance.

Now Durenberger is saying that Pawlenty might not mean much to the radical Republicans — or at least, that McCain doesn’t. “John McCain doesn’t have a prayer with the conservative base vote, that’s not what his campaign is about,” Durenberger said, adding that McCain is running and succeeding because “he’s the only one that could beat Hillary.”

Durenberger ruminated that there were many ways to look at the running-mate choice, and that the decision wouldn’t come for a while anyway. “You could look at this for a long time and not come up with a definitive answer,” he said.

Still, Durenberger knows McCain, and says that Pawlenty’s best bet if he still wants to go to Washington may simply be his earnestness.

“Tim is only involved in this because he sees a guy in John that he can truly believe in,” Durenberger said. “People have said that since he first laid eyes on John that he wanted to be vice president, but you don’t spend this much time on a campaign unless you sincerely want to be there. And John might well say he wants someone at my side who thinks like me and acts like me and forget about the 51 percent a running mate might give me.”

Still, it’s hard not to think that McCain looked at the Minnesota numbers and thought: Whither the guv? Perhaps, Durenberger said, but he doesn’t rule anything out.

“This campaign is the most unique phenomenon I’ve seen in my lifetime, in that the desire for change just caught everyone by surprise, so anything can happen in the next nine months,” Durenberger concludes. “The speculation that you and I are engaged in is almost irrelevant.”