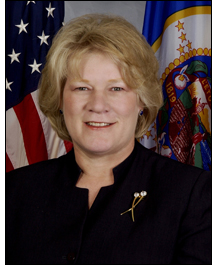 You political junkies and those of you who secretly admire Machiavelli, let’s do some speculating.

Get it? A Republican governor and a DFL lieutenant governor. How would that work?

“Let’s say cats and dogs,” speculated Hy Berman, a retired University of Minnesota history professor.  “It would be unprecedented in terms of animosities — political animosities and policy differences.”

It happened once, though not by succession. In 1960, voters gave the nod to Republican Elmer L. Andersen as governor and to DFLer Karl Rolvaag as lieutenant governor.  In those days, candidates for those two offices ran independently. Voters in 1972 changed the constitution and had them run on a single party ticket.  Part of the rationale for the amendment was to reduce the chances of an executive marriage of mixed political faiths.

“There was not that much difference between a moderate DFLer and a moderate Republican,” said Berman. “The sharp differences that we associate with policy didn’t occur until later.”

That doesn’t mean Andersen and Rolvaag were best buddies. In 1962 — a term was two years then — Andersen sought re-election. Rolvaag, his lieutenant governor, ran against him in a bitter, ugly campaign.  Rolvaag won after a lengthy, contested recount.

A political marriage of inconvenience
But how about Gov. Molnau and Lt. Gov. Metzen?  Would he get an office in the Capitol or a spare room in Roseau?

“In a different political time and place, one could envision that a governor of one party with a lieutenant governor of the other would use the opportunity to stress bipartisanship and a shared vision for moving the state forward,” said  Chris Gilbert, a professor of political science at Gustavus Adolphus College in St. Peter who was asked in a MinnPost email to speculate on a possible succession.

“Nothing about the current lieutenant governor suggests that will happen, nor does the state GOP seem interested. Nor would today’s DFL be very interested if the reverse situation existed.”

In other words, said Gilbert, it probably wouldn’t be pretty.  So you can speculate even further.

Gilbert said the state DFL Party might do well to highlight that Molnau, a controversial figure, would become governor with a McCain-Pawlenty victory. That might help keep Minnesota in the Democratic column for president.

On the other hand, would Senate DFLers and the party want Metzen in the lieutenant governor’s office, a possible launching pad for the gubernatorial election in 2010?   He has a drunken driving conviction on his record and might not make the most appealing statewide candidate.

So how to get him out of the line of succession?
Senate DFLers would have to remove him as president of the Senate.  But here’s where even Niccolo Machiavelli might blanch. They would have to remove him and choose a new Senate president before the current legislative session ends in May, well before the national election and maybe before McCain announces his running mate.

The state Constitution says: “The last elected presiding officer of the Senate shall become lieutenant governor in case a vacancy occurs in that office.”  In 2009, when a new Legislature convenes, Senate DFLers, who will continue in control, must again decide who will be Senate president.  It could be Metzen or it could be any other member.  But the “last elected  president”  would be Metzen.

Gilbert’s guess is that a Gov. Molnau would just let her lieutenant governor serve in obscurity.  Says Gilbert: “If that’s the case, then it might matter less who the person is, although if I were the DFL, I would re-think the present Senate president.”

Ready to consider some Machiavellian political machinations for Minnesota?