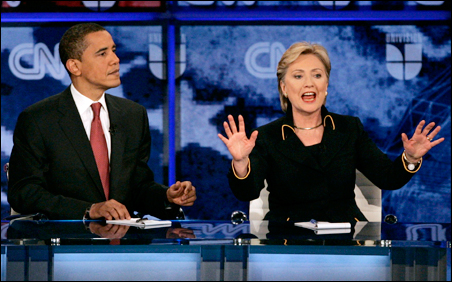 A great beginning, a great end and a thud in the middle: That was the emotional arc of Hillary Rodham Clinton’s debate performance Thursday night in Austin, Texas.

In the 19th and penultimate Democratic debate, Clinton was the most closely watched participant, the front-runner-turned-underdog versus Barack Obama. In her opening and closing remarks, she floated like a butterfly, but stung herself with a nasty reference to the banal “controversy” about Obama repeating lines uttered by his campaign co-chair, Massachusetts Gov. Deval Patrick.

“Lifting whole passages from someone else’s speeches is not change you can believe in; it’s change you can Xerox,” said Clinton, earning the same loudness of boos as John McCain talking immigration to the Conservative Political Action Committee.

Contrasts or valentines?
It was a louche moment from a candidate who couldn’t decide whether to draw contrasts or valentines. Obama calmly demolished her
— “The notion that I had plagiarized from somebody who’s one of my national co-chairs who gave me the line and suggested that I use it, I think is silly” — and post-debate commentators piled on. A reader at the left-leaning Talking Points Memo noted that the preamble to Clinton’s heartfelt closing statement  – “The hits I’ve taken in life are nothing compared to what goes on every single day in the lives of people across our country” – mirrored a certain key supporter’s 1992 comment that “The hits that I took in this election are nothing compared to the hits the people of this state and this country have been taking for a long time.”

OK, it’s all stupid and this is about the serious state this country’s in, right? Well, yes, but the candidate has to close the sale, and on policy, it just wasn’t Clinton’s night. Her “ready on day one to be commander in chief” argument has always been undersold – her standard line about visiting 80 countries as first lady and senator is just not compelling, yet she rarely mentions the high marks she’s earned as an Armed Services Committee policy wonk – and Obama effortlessly swatted it away by invoking her Iraq War authorization vote. “On what I believe was the single most important foreign-policy decision of this generation – whether or not to go to war in Iraq – I believe I showed the judgment of a commander in chief. I think that Senator Clinton was wrong in her judgments on that,” he said.

Switch the word “Clinton” for “McCain” and you have the centerpiece of debate arguments hence.

In earlier debates, Clinton cleaned Obama’s clock on another top issue, health care; last night, he fought her to a draw. The distinction, as loyal debate-watchers know, is about mandating that healthy ne’er-do-wells subsidize the sick. Clinton favors it, and it is the essence of Democratic philosophy: that society’s toughest bumps are best solved with socialism. (There — we said it.) Noting Obama’s opposition to mandates, Clinton made a nifty point about another socialist achievement: “In one of our earlier debates John Edwards made a great point. It would be as though Social Security were voluntary; Medicare, one of the great accomplishments of President Johnson, was voluntary. I do not believe that is going to work.”

(For those of you not keeping score at home, Clinton mentioned the endorsement-dangling Edwards twice; Obama not at all.)

No enforcement mechanism
The trouble with health-care mandates is they’re a little like libertarianism – a utopia not proven to work in the real world. Obama noted that Massachusetts, the first state to impose mandates, has exempted 20 percent of the uninsured because people can’t afford to buy it; a mandate-and-subsidize provision helped kill California’s bipartisan effort earlier this year. While Clinton is fond of trotting out the figure of zero uninsured under a mandate versus 15 million under Obama’s no-mandate plan, the comparison is phony: She has not spelled out an enforcement mechanism, and without a real-world model, zero is a meaningless ideal.

What of Clinton’s effective rejoinder that Obama mandates for kids, just not adults? To me, Obama was half way to the right response: “The reason a mandate for children can be effective is, we’ve got an ability to make affordable health care available to that child right now.” The bottom line is that kid care is far less expensive than adult care, and politicians have been more willing to subsidize it (thanks in part to Clinton, who rightly deserves credit for the State Children’s Health Insurance Program, or SCHIP).

Health care is just one example that the more the Democrats debate, the more spending (often via subsidy) they seem to be ladling out. True, they can both recapture the $50 billion to $60 billion that will come from canceling out the Bush tax cuts for those making over $250,000, plus some increment of the $100 billion to $200 billion from winding down the Iraq War. Will it be enough to pay for economic stimulus, health-care subsidies, increased foreign aid, $4,000 tuition tax breaks for college students doing national service as well as many other spending initiatives – while reducing the ballooning budget deficit? Most Democrats and many independents argue that priorities need shifting, but price tags will be a major battleground when the next round of debates begins.