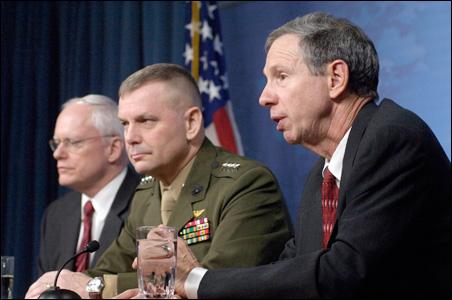 Shooting a spy satellite out of the sky might be easier for the United States than convincing skeptics that the nation is not doing it to gain advantage in a futuristic space-arms race.

The response from around the world has been profound skepticism since U.S. officials said last week they plan to shoot apart one of our spy satellites in order to protect people on Earth. The atmospheric shoot-’em-up could come any time after Wednesday morning, when the space shuttle Atlantis is scheduled to return from its mission to the International Space Station.

President Bush ordered the Navy to blast apart the USA 193 orbiter because it is out of control and carrying 1,000 pounds of the hazardous propellant fuel called hydrazine, the Defense Department announced. If left on its own, the bus-sized satellite likely would crash to Earth after March 6, and the fuel tank could survive the fiery re-entry only to leak its toxic load on the ground.

Objections from abroad
But Russia isn’t accepting that official explanation. “It believes that the United States plans to test a new type of strategic arms under the pretext of destroying its satellite,” the Itar-Tass news agency said of the Russian Defense Ministry.

China also objected vociferously, even though it shot down one of its own satellites a year ago. Its foreign ministry demanded that the United States avoid “damaging security in outer space and to other countries,” and vaguely threatened to take “preventive measures,” Reuters reported from Beijing.

Even experts in the United States greeted the news with puzzled skepticism. “The announcement set off an immediate debate on defense blogs and among experts who questioned whether there is an ulterior motive,” the Washington Post reported.

Big-deal target practice
The controversy is no surprise to William Garrard, a University of Minnesota professor of aeronautical engineering who also directs the Minnesota Space Grant Consortium.

Satellites are critical components of modern-day defense and military systems, Garrard said. U.S. forces depend on them for guiding smart weapons, vital communications and battlefield information about everything from enemy movements to weather conditions.

Further, most of us on the ground also have come to depend on satellites — more than we realize — for everything from police operations to business communication to daily weather forecasts. Disruption of satellites could cripple commerce and much more.

“If somebody shot down one of our satellites mysteriously, that would be close to an act of war,” Garrard said.

Hence, anything resembling target practice on satellites is viewed with intense suspicion around the world.

“It is a big deal, and it has been a big deal for a long time,” Garrard said.

It was a big deal in January 2007 when China used a ground-based ballistic missile to knock down one of its worn-out weather satellites. Other countries, including the United States, objected strenuously. Last week, the U.S. State Department instructed diplomats around the world to explain that the U.S. plan is different from China’s deliberate test of an anti-satellite weapon.

Before China’s test, no nation had been known to successfully fire such a weapon since the 1980s. At a United Nations Disarmament Conference last week, Russia and China called for banning the development of weapons in space, something the White House has resisted. Russian officials vowed over the weekend to press the issue again at an upcoming meeting with Americans in Budapest.

Enormous moving target
Of course, there’s always the chance the United States could fail to shoot down its malfunctioning satellite — and plenty of questions about what signals that would send around the world.

“They are trying to hit something that is moving 17,000 miles per hour,” Garrard said. “It is a major challenge.”

In some respects, though, the task will be easier than destroying an incoming missile because “they know pretty much where the satellite is going to be,” Garrard said.

Also, the target is big, even for a satellite. 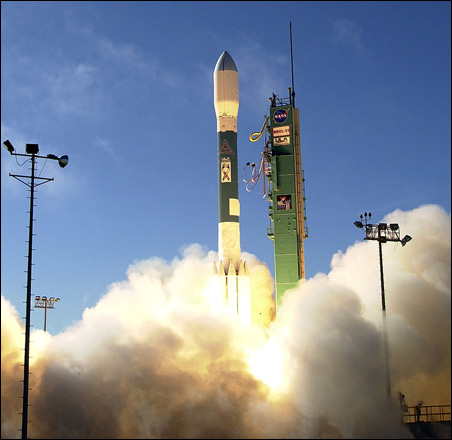 Plans call for firing modified SM-3 missiles from ships in the Pacific Ocean once the satellite reaches an altitude where its pieces would be likely to re-enter Earth’s atmosphere and burn.

There is concern that some pieces may remain aloft if the blast knocks them higher. Space debris is a major worry, Garrard said, because of the potential for high-speed collisions with space vehicles.

“A marble-sized piece of debris could cause tremendous damage,” Garrard said. “It’s one reason most countries have decided not to do this.”

If the U.S. plan fails, the 5,000-pound satellite will crash on its own, and about half of it would survive re-entry. Chances it would hit a populated area “are small,” the Defense Department said, but if that happens people should stay away from the debris until hazardous materials teams have decontaminated it.

Hydrazine dispersed high in the atmosphere shouldn’t cause any problems on the ground, Garrard said. If the hydrazine tank does land on Earth, it wouldn’t be the first time. The hazardous fuel was a prime reason the government warned people to stay away from pieces of the shuttle Columbia after it disintegrated on its way home in 2003.

The hydrazine coming down with the satellite would disperse over an area about the size of two football fields, defense officials said.

Even with incredibly long-shot odds that the fuel tank would land anywhere near a town or city, the warning is important, Garrard said.

“It’s a very toxic substance,” he said. “It could burn badly.”

How to see the satellite

The rogue spy satellite, USA 193, already is descending as its orbit decays and it is slowed by friction in the upper atmosphere.

As the satellite loses altitude, it should be bright and visible from the ground, according to www.heavens-above.com based in Germany.

Could the satellite be seen from Minneapolis? Yes, the website says, for periods of five minutes or fewer per day. The site offers times and other details for the next few days — provided, of course, that the satellite hasn’t been shot down. The site also offers charts showing the satellite’s location against a backdrop of stars.

What satellite trackers can’t do is predict exactly when and where the spy satellite will hit the Earth if it isn’t shot down. That would be akin to precisely predicting weather a month in advance, said the scientists who contribute to heavens-above.com. Too many variables.