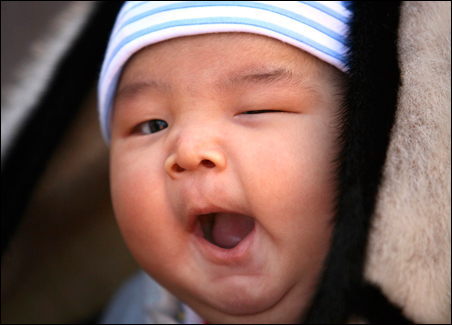 Choosing a name for your unborn child has never been simple. The decision looms large for nine indecisive months, seeming to bear the power to commit your child to success or doom her to failure. Rose, by any other name, may not adjust as well, earn as many A’s or make as much money.

But massive online databases have tipped the difficult task into an obsessive realm, injecting a fluky science that can justify your favorite names or trip up your gut instincts. Their web traffic peaks this time of year, when many people are pregnant and planning.

The Social Security Administration operates the most comprehensive site, Popular Baby Names, which ranks the 1,000 most common boy and girl names since 1880 — back when Minnie, Ida and Bertha were big. Parents-to-be can look up specific names and track their popularity ranking over time and by state. There is much to be learned (and procrastinated about) on this site. 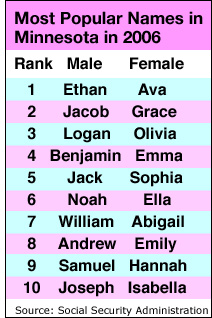 Minneapolis native Peggy Orenstein, a contributing writer for The New York Times Magazine, also was a thorough name researcher. “I’ve trawled the Social Security site for clues to the potential future of ‘our’ name. I’ve sifted through message boards on pregnancy sites to see if it has cropped up among other moms-to-be. I’ve checked a site that polls users to determine a name’s image based on continuums of ambition, attractiveness and athleticism. I’ve even looked on the Kabalarian Philosophy site, which, using a supposed mathematical principle, analyzes the ‘power’ hidden in more than 500,000 names,” Orenstein wrote in a 2003 feature called “Where Have All the Lisas Gone?” (She chose Daisy.)

‘Seeds of destiny’
Naming holds a powerful intrigue, Orenstein has learned. She’s written about a wide array of deep subjects — feminism, racism, infertility, adoption — and yet, the baby-naming article remains one of her all-time most popular pieces.

Why, I asked her in an e-mail?

“Names seem so all-important when you’re thinking them up,” Orenstein wrote me. “You’re planning a name for this person you haven’t met yet but are anticipating more than anything you’ve ever anticipated before. It’s so exciting. It’s part of the thrill, part of the ritual. And we invest so much in them. Names can have spiritual meaning, ethnic meaning, familial meaning. They contain seeds of destiny.

“They say something about who we are, what class we are, what educational level, where we live. They’re like tea leaves. I can hear what someone named their kids and get a kind of Rorschach test of who they are. It’s a kind of magic, really.”

Online aid
Many websites try to guide the magic making. For starters, you can take an online test at BabyZone.com to determine your baby-naming personality. It asks for your favorite season and your favorite window treatment, among other things, then calculates whether you’re a “genuine traditionalist,” “a traditional individualist” or a “free spirit.”

Free spirits are encouraged to make up their own names — or use BabyZone’s Baby Name Inventor. Its suggestions include Zal, Rokel and Karb for girls and Sed, Budo and Tophr for boys. ThinkBabyNames.com goes a step further, inventing first-and-middle-name combinations for adventurous parents. Their suggestions include Beal Ludlow, Vellda Bellita and Joella Hippolita.

And if you’re torn between all three, you can create an online poll and ask others to weigh in. Be careful, though: They just might like Joella Hippolita.

Christina Capecchi writes about culture and the social impact of technology. Capecchi can be reached at ccapecchi@minnpost.com.

· There are far more names in circulation today.

· Parents tend to be more daring with girl names.

· The man who created the Social Security’s Popular Baby Names site is named Michael Shackleford. He suffered from bearing the No. 1 boy name for 35 years and hoped his site would steer parents away from overused names. (Footnote: Years ago, Michael named his son Aidan, which has recently become a chart topper.)

· The Social Security site will release the most popular names of 2007 in early May, right before Mother’s Day.

*Information gleaned from reporting by Peggy Orenstein and original reporting