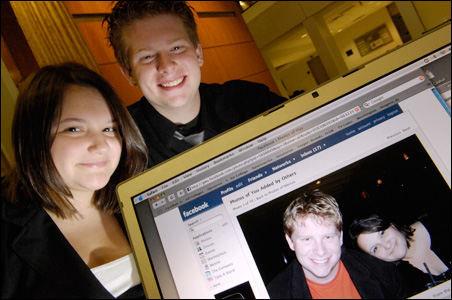 REUTERS/Jonathan Ernst
Stephanie Endicott and Marcus Smallegan, first-year students at George Washington University, took a big step in their relationship by declaring it on Facebook.

Have you heard of Wookieepedia? No, not Wikipedia — Wookieepedia. It’s a twist on the familiar online encyclopedia, named after the jungle-dwelling “Star Wars” race Chewbacca made famous, the wookiees.

Anyone can edit the Star Wars encyclopedia Main_Page, which borrows the slate-colored format of its popular predecessor. Wookieepedia is a haven for fans of The Force, where they devour “Star Wars” news, “Star Wars” anniversaries and “Star Wars” trivia totaling more than 54,000 articles.

As such heavy-hitting social networks as MySpace and Facebook continue to grow, some of their members are grousing about too many friends and too much clutter. If your Old Man can join Facebook, they reason, the elitist allure is gone.

Social networks target everyone from readers to pet lovers
Mainstream social networks do feature targeted groups. Facebook, for instance, offers an application that tracks the books your friends are reading. But certain bibliophiles would rather bypass the rest of the rubbish and indulge in unadulterated book discussions.

Take Lisa Jensen, 25, a Maplewood bookseller who joined Goodreads.com a month ago and has since rated 123 books, writing reviews for half of them.

“I love books, and I’ve been toying with the idea of finding some way of organizing and tracking my reading,” Jensen said. She enjoys “peeking on what everyone is reading and filling my library.”

One of Jensen’s Goodreads friends wrote this comment on her profile: “This site is fun. It’s like an intelligent MySpace (I realize that’s a bit of an oxymoron).”

Jensen is one of more than 850,000 members who have joined Goodreads since its December 2006 launch. That breaks down to an impressive 60,000 new members a month. (Goodreads’ community manager called growth “steady,” saying the site is now run by a three-person staff.

But if reading’s not your passion, don’t despair. There’s a social network for nearly every interest. Pet lovers flock to fuzzster.com. Music lovers embrace MOG.com. And RNs congregate at nurselinkup.com, the first of more than 500 specialized sites Baltimore-based Online Linkup says it plans to launch. Some of its planned sites are quite narrow: OsteoporosisLinkUp, BassFishingLinkUp, RugbyLinkUp, QuiltingLinkUp, ChickenPoxLinkUp, HamsterLinkUp and even AlzheimersLinkUp.

Though it’s fun to mingle with like-minded folks on specialized sites, there can be a downside, warned Jensen, who is also a member of a few niche communities on LiveJournal. “Sometimes it is a way for a specialty community to discriminate and even ostracize someone for not liking the same things they like.  Honestly, there are some communities that will basically drum you out for expressing an opinion that goes against the norm.”

Move over, Match
The movement toward niche networks is reshaping the romantic milieu, too. Rather than joining a mainstream site like Match.com or eHarmony.com, many singles are seeking targeted audiences. There’s IGHsingles.com for Inver Grove Heights residents, executivecatholicdating.com, nerdpassions.com and farmersonly.com, which bears the trademarked slogan “City folks just don’t get it!” and portrays the American Gothic pair. Some 44,000 people viewed the site last month.

Sites that require little time to join — spurred by the backlash against eHarmony’s extensive process — are also surging. The web analytics company Compete.com recently named Singlesnet.com one of the fastest-growing websites, noting that it elicited more than 9.8 million visitors last month, up 56 percent from December 2007. “Online dating made easy,” reads the slogan, which appears above the site’s prominent promise that it “takes less than 30 seconds to create an account.”

Sites that are both quick and local may be the hottest juncture, which helps explain why Twin Cities singles seek romance on Craigslist.org. It’s convenient, said Andy Dick, 27, a St. Paul landscaper who has gone on a few dates with women he met on Craigslist.  While browsing for a used futon, you might as well find someone to share it with.

It’s also free, Dick noted, which may explain why Craigslist connections tend to be more cavalier. “Match.com girls might be more serious about finding someone because they paid a monthly fee. But anyone can casually scroll through Craigslist. I had a few responses that said, ‘Yeah, it’s late. I’m bored.'”

Craigslist may attract those who are too shy for other dating sites, Dick speculated. Filling out an account with Match or eHarmony can feel like sticking your neck out; posting a Craigslist personal is as easy and anonymous as sending an e-mail.

Creative license on Craigslist
Kate-Madonna, a 26-year-old from Burnsville who works in risk management, said she prefers Craigslist’s blank slate to the rigid format of eHarmony, which she tried for less than a month. “There’s hardly room to express yourself or demand attention with your words. I’m not someone who fits easily into provided two-sentence or multiple-choice questions. I needed the ability to define myself on my own terms, so I went to Craigslist.”

There is a risk to meeting anyone from Craigslist. That reality hit close to home in the Twin Cities last October, when 24-year-old Katherine Olson was murdered. She had gone on dates with men she met on Craigslist and, on the night of her death in Savage, she was meeting someone about a job as a nanny listed on the site.

Craigslist asserts that “the overwhelming majority of craigslist users are trustworthy and well-intentioned. With billions of human interactions facilitated through craigslist, the incidence of violent crime has been extremely low.” But, the site goes on to note, some precautions should be heeded.

That’s a risk Kate-Madonna feels capable of managing. Interacting with someone from Match.com doesn’t guarantee safety, either, she said.

“I don’t feel any safer because I pay for a service than if I start a debate with someone online in Craigslist’s Rants and Raves or if someone spots me in the hall and writes about me in Missed Connections,” she added.

Missed Connections allow locals to describe someone they spotted but didn’t connect with, to their regret. Descriptions are detailed, such as, “Boy in the plaid shirt from the Key’s off of University” or “Black North Face jacket board the 16 bus.”

On Jan. 28, someone described Kate-Madonna in a Missed Connection, writing: “You had on one of those short dresses that are sort of like T-shirts but tight at the bottom around your thighs, black pantyhose this morning walking through the skyways, we caught each other’s eyes not sure if there was a connection or not.”

Although she had always hoped to be written about in a Missed Connection, Kate-Madonna found the detailed description of her outfit bizarre, she wrote on her blog.

“I wished he would have noted my ‘intellectual determination,’ or, I don’t know, something else besides how my legs looked in pantyhose,” she said in an interview. “I can’t believe he used that word!”

Still, she’ll continue perusing Craigslist, which was replete recently with requests for Valentine’s Day dates.  Some were sweet. Others were sickening, like the 40-year-old from Woodbury who offers a box of chocolates and then writes, “The only requirement I have is you are weight to height appropriate.”

It’s a microcosm of the real world.