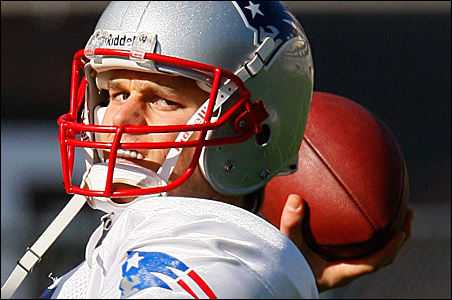 REUTERS/Shaun Best
New England Patriots quarterback Tom Brady, in search Sunday of a 19-0 season, wasn’t even born the last time the Vikings made the Super Bowl 31 years ago.

The Vikings aren’t in it and haven’t been now for 31 years, or seven months before Patriots quarterback Tom Brady was born. But Sunday’s Super Bowl will deeply affect Minnesotans.

As you dash to the store to buy your chips, dip and Maalox, think stadium debate, think gambling, think consumption, think religion.

Is there anything else in Minnesota?

First, the stadium: MinnPost has learned that leaders of the Metropolitan Sports Facilities Commission are scheduled to meet today with Peter Eisenman, a world-renowned architect, who helped design the University of Phoenix Stadium, site of Sunday’s game.

Commission staff and members also will chat with NFL officials about playing host to another Super Bowl – the Metrodome was the center of the universe in 1992 — if and when a new stadium is built.

But Eisenman is big in the biz, and a potential player as the Vikings’ stadium effort drip-drips at the Legislature this session and bang-bangs during what’s certain to be a 2009 new stadium blitz at the Capitol.

Eisenman helped design the “rollout” field at the suburban Phoenix stadium, which also has a retractable roof. That is, the grass is actually on a tray – a two-or-so-acre tray — and it rolls out of the stadium when games aren’t scheduled, so the facility can be used for trade shows and other events that might otherwise destroy the natural surface.

Neat idea, but unworkable in Minnesota for a number of reasons. One, our climate. Two, if the Metrodome site is re-used – as seems likely – there’s not enough acreage to place the field outside the stadium footprint. Three, we already have two metro-area convention centers that compete for the trade shows.

Still, keep your Super Bowl eyes on Eisenman. He is a rabid New York Giants fan, as is Vikings owner Zygi Wilf. Eisenman designed Berlin’s sobering Memorial to the Murdered Jews of Europe, which has received international acclaim. Wilf’s family survived the Holocaust, and he contributes mightily to Holocaust memorial causes. So far, Wilf and Eisenman haven’t met, but…

“We’re both from New Jersey,” Eisenman said. “I would have thought he’d be interested in talking.”

We may remember this Super Bowl as the game that launched a thoughtful design for the Vikings new Taj MaZygi. Now, if only someone had a $1 billion to pay for it …

You can bet on it
Which leads to gambling. Some Minnesotans might begin their compulsive gambling habit Sunday. Maybe even you. It’s the sort of event that gets people betting on just about everything, said one of the state’s leading experts on gambling disorders.

For the already compulsive gambler, it’s one mega-event that can help reduce debt, with one big win. It’s the ultimate in chasing losses.

“But somebody who is a recreational gambler, just having fun at it and they get a big win from a Super Bowl bet, that often is a trigger for people to get into the problem,” Winters said. “Many problem gamblers talk of that big experience.”

Said Winters: “We’re a gambling nation. If you want, you can bet on anything.”

At some Web sites, beyond wagers on whether the Patriots can complete a perfect season, one can bet on which Super Bowl team will get the first penalty, achieve the most first downs in the second quarter, whether the player to score the final touchdown in the game will be wearing an odd or even number on his jersey and with what song Tom Petty will finish his halftime show.

Compulsive gamblers are still just 1 percent of the population, Winters said. Still, if you find yourself Googling Petty’s list of hits and considering an online wager on “Don’t Do Me Like That,” seek help. Immediately.

Data to munch on
This one day – a rare day in which the nation as a whole isn’t diffused into subsets and countless channels of news and entertainment but becomes the great mass, this unified tribe we thought we once were – is a singular cacophonous, consumer-directed package.

Last year’s Super Bowl was the year’s highest-rated TV show in the United States, attracting more than 93 million TV viewers, according to the Nielsen Co., which monitors TV, online, sales and advertising activity,

Total advertising spending for the 2007 Super Bowl approached $162 million. In that one game, that’s more than all presidential candidates have spent on TV so far this campaign season, according to Advertising Age.

It’s not only about males. About 36.4 million women over the age of 18 watched the 2007 Super Bowl, more than a third of the audience.

It’s geared to the upper slice of society. According to Claritas, a Nielsen company, consumers that are most likely to be watching the Super Bowl tend to own luxury SUVs, have Blackberries, subscribe to satellite radio and own iPods.

It’s Minnesota to the core. Out of all the nation’s markets, the Twin Cities area was ranked fifth nationally in households watching last year’s game between Indianapolis and Chicago — that’s 49.2 percent of us. Only viewers in Indy and Chicago, Orlando and Kansas City outnumbered us.

But here’s the clincher.  Even the Mall of America empties out at kickoff time. The amusement park and Under Water Adventures retain some customers, but Mall spokesman Dan Jasper said as kickoff approaches, “Yes, foot traffic is down.”

The Super Bowl eats the megamall. The game is a monster.

Game, God, football, faith
So, this is a good weekend to question the meaning of the universe and the future of the human race.

There is some logic to linking the Super Bowl to issues of faith, values and ritual. After all, stadium finance debates, gambling, advertising, over-consumption and public relations hype surely combine to punch at the depth of our souls.

“There are absolute limits to this kind of talk,” said Glen Berg-Moberg, pastor of the St. Anthony Park Lutheran Church in St. Paul. He noted that just about every minister has joked in one Super Bowl sermon or another about the religion of football. “But I don’t think you’d find any person who seriously would say that ‘football is the thing that sustains me in my dark moment.’ ”

(He must not know any Packers’ fans.)

Still, the Super Bowl does possess a holy host of religious characteristics, said Joe Price, professor of religious studies at Whittier College in California, the leading thinker on the meaning of the game.

For example, the game is always on a Sunday, the Christian Sabbath.

It’s identified with Roman numerals. “Where else do we use Roman numerals other than in trying to identify the significance of something almost religious,” he said.

The NFL, that powerful force, has become the “denomination,” as Price puts it, that we’ve all come to bow to every Sunday … and Monday night and Thursday night. And the game, promoted by the league, glorified by the Super Bowl, is a vehicle for myth.

“To a certain extent, football itself is a game about the conquest of frontier,” Price said, “Even at a deeper level than just the myths about the NFL, there is a kind of national resonance with the structure of the game.”

The Patriots have plunged into Giants territory. The line is protecting the quarterback. The ground game is strong. Blitz, bomb, aerial attack. (See David Carr’s terrific column from earlier this week in the New York Times.)

Of course, such language permeates a ho-hum NFL game in October, too. “But what distinguishes the Super Bowl is that it is the High Holy Day event,” Price said. “There is a ritual preparation.”

Snacks. Beer. Gambling. Families and friends gather and “share a fascination with the mediated version of the event, the televised version. Almost as much as the game, it’s a celebration of American consumerism.”

In the end, it seems we need the Super Bowl. It comes every year after the State of the Union Address. It’s a diversion from the “reality of having to confront the depth of issues we have to confront as a nation,” Price said.  It comes when credit card bills are due or overdue from our holiday shopping. It comes in the coldest and darkest days of February.

“It’s a signal that winter is finally closing,” Price said. “In that regard, what could be more hopeful?”

Super Bowl and hope? In Minnesota, that’s a real leap of faith.

Super Bowl: More than game — for Minnesotans, too