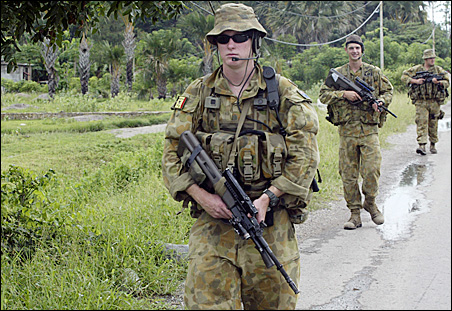 As East Timor President and 1996 Nobel Peace Prize winner José Ramos-Horta lay in an induced coma in Australia after being shot by rebels at his home on Monday, expressions of support poured in from all over the world. They included a strong statement by the U.S. State Department and the quick arrival of a warship and rapid-response troops from Australia, whose prime minister has agreed to travel to the capital of Dili this week to express his confidence in the East Timor government.

“It’s reprehensible, and these violent attempts are an attempt to turn back the clock for the people of East Timor,” said State Department spokesman Sean McCormack, Reuters reported.

“Certainly our thoughts and prayers are with the president and the prime minister,” he added. Prime Minister Xanana Gusmao’s motorcade was ambushed shortly after the shooting of the president, but he was unharmed in the attack. Both Ramos-Horta and Gusmao were major figures in East Timor’s long and difficult struggle for independence. A former Portuguese colony, its people suffered years of repression by neighboring Indonesia before achieving independence with U.N. help in 2002.

Australian Prime Minister Kevin Rudd said “the additional 200 soldiers and police would bring his nation’s deployment to East Timor to about 1,000 personnel,” according to the London Telegraph, noting that “Australia led intervention forces into East Timor in 1999 and 2006 – the latter to end factional fighting which left 37 people dead and drove up to 150,000 from their homes.”

Short-term problems, long-term gain
As for what these developments, as well as the killing during the shooting of rebel leader and fugitive Alfredo Reinado, mean for the country, the New Zealand Herald looked to Helen Hill, an East Timor expert at Victoria University in Melbourne. “In the short-term there will be a lot of fearfulness because some of his supporters are still running around with guns,” she said. “But for the long-term, one of the government’s major headaches is now out of the way. … Anyone intent on destabilising East Timor will have a much more difficult time, now that Reinado is out of the way. My hope is that there’ll be an improvement in the security situation. I also think there will be an upswell of sympathy for Ramos-Horta.”

The Herald also said that Ramos-Horta “was a careful negotiator and the rebels may have been frustrated with his determination not to give ground in recent talks.” It quoted adjunct professor Norman Day from RMIT University:  “A lot of people would see the only way to deal with him would be to eliminate him. This is very destabilising, just when the place was [getting] back on its feet.” Day said Reinado “has a strong following — he’s now [achieved] a sort of Che Guevara status,” the Herald reported.

Prime minister calls attacks a failed coup
Gusmao said he thought the attacks were intended to “paralyze the government and create instability,” the Associated Press reported.

” ‘I consider this incident a coup attempt against the state by Reinado, and it failed,’ Gusmao said. ‘This government won’t fall because of this.’ Reinado was among 600 mutinous soldiers dismissed by the government in 2006 — a move that triggered gun battles between security forces that later spilled over into gang fighting and ethnic unrest.”

For now, interim President Vicente Guterres has declared a state of emergency and appealed for calm, and the head of East Timor’s military “urged the public and media to persuade Reinado’s followers, who had fled into the jungle, to return for talks,” according to Reuters. It also reported today that “schools, businesses and government institutions were open in Dili, as local police stopped and checked cars, but the calm appeared uneasy and residents admitted they were nervous.”