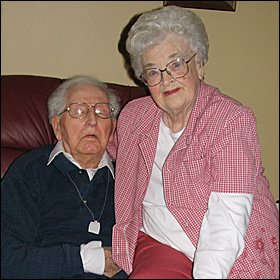 Mayme and Clarence Vail — the longest-married couple in the country — had a lovely Valentine’s Day at their place in the Comforts of Home assisted living center in White Bear Lake. It was just three days short of  their 83rd wedding anniversary and she — fit as a fiddle at age 99 (100 in April) — kept busy, as usual.

Clarence, though, takes a slower path through the day. He’s 101 and doesn’t see well. “Pretty much, he just eats and sleeps,” Mayme said.

She climbed onto the arm of his recliner to pose for a picture, but Clarence barely noticed. She tried to get him to smile.

Earlier in the day, Mayme had exercised with the morning class, then participated in a Bible study with a minister who came to the center.

The couple had a nice Valentine’s Day lunch together in the center dining hall: chicken on noodles, salad and a piece of cake.

After lunch, Mayme and some of the other women in the center watched “Annie Get Your Gun” on the big TV. Clarence slept some more.

I had stopped by the center to visit my Aunt Lorraine Kehl and had noticed a sign in the elevator reminding residents of a special lunch for the couple on Friday. “Celebrate Clarence and Mayme’s  83rd anniversary,” it read.

Then I remembered. They’re the couple from Hugo, who show up on the news every so often. I’d written about them a couple of times at the Star Tribune: When they’d celebrated their 80th anniversary at the Hugo Legion Hall in 2005, and again in 2006, when they had Christmas cards showing their 99th great-grandchild, Teresa Jane Cavanaugh, a newborn, with Clarence, who was 99 back then.

They moved out of their home a year ago, when Clarence’s vision deteriorated, but they’re the toast of the new Comforts center in White Bear Lake, tucked back along Gun Club Road, across from the Burger King and Haskell’s.

Couple officially decreed longest wedded
They’ve been officially decreed the longest-wedded couple in the country and have been invited to appear on the “Tonight Show With Jay Leno” and “Good Morning America.” Mayme is game, but it’s hard for Clarence to get around, so she’s always declined.

Oprah’s people called once, too. “I made a mistake. I didn’t lock into a date, but told them to call the office here. Well, they must have had trouble getting through on the phone, because we’ve never heard back,” Mayme said.

They met in 1923. when she was an eighth-grader. They were married on Feb. 17, 1925. That’s the year the first working television was tested in a lab, and the year that John Scopes was charged with a crime in Tennessee for teaching Darwin’s theory of evolution. “The Great Gatsby” was published, but wouldn’t be recognized as a classic for 25 more years. And the Pittsburgh Pirates beat the Washington Senators in the World Series: 4-3.

Besides the lunch with residents on Friday, the couple will be feted at an open house at the center on Feb. 24.

Some tips for other couples
Their advice?

Mayme’s the outspoken one, always has been. The secret of a long marriage, she once told me, is:

“You have to endure sarcasm now and then. And when you have a disagreement, one of you has to keep quiet.”

Do they take turns getting one’s way and being the one who keeps quiet?

“Well, my husband doesn’t speak too much,” she said. “He’s the strong silent type.”

A surprise discovery
Recently, their daughter Arlene Leyden of St. Paul filled out a lengthy questionnaire for the Guiness Book of World Records folks. She got statements from doctors and mayors and families, all to provide evidence of their longest-married-couple claim.

They also submitted birth certificates, which, to Mayme, provided quite a shock.

“All these years everyone’s called me Mayme. But on the birth certificate, it shows my real name is Lillie Mary. All these years, I never knew,” she said.