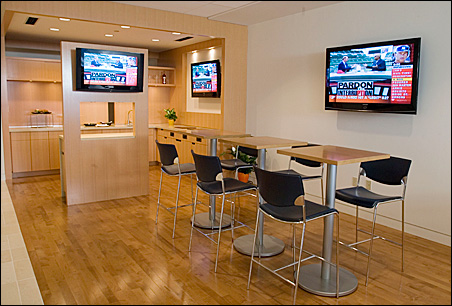 Photo courtesy of the Minnesota Twins
The Twins’ new ballpark luxury suites may be fancier than your house.

You know things in life are topsy-turvy when the suites at a baseball stadium are fancier and hipper than your house. (Neater, to be sure.)

You know, too, that the modern era of sports business has arrived in Minnesota when, beginning next week, you will have the chance to buy a Twins seat … and keep the rights to it forever and ever … or sell it in a couple of years on the open market … or will it to your granddaughter.

Welcome to the new Twins ballpark — soon to be Corporately Named — which is set to open in two years, but is already a half-billion-dollar bundle of designer revenue streams.

Such was the display Monday, when the Twins unveiled a model suite to the great unwashed media in the team’s marketing center on the 46th floor of a downtown Minneapolis office building that was once known as Multifood Towers.

Twins launching Legends Club
They also chatted up the team’s new Legends Club, wherein $1,000 (or $2,000) buys you “a membership” that gives you the right to … purchase season tickets.  Those tickets will cost about $4,000 per season.

(Note: That’s actually a “reasonable” price. A Timberwolves season ticket in that team’s exclusive Club Cambria is $3,870 for half as many games. The Wild are at about $3,500 for club seats, too. No “membership” fee upfront, however.) 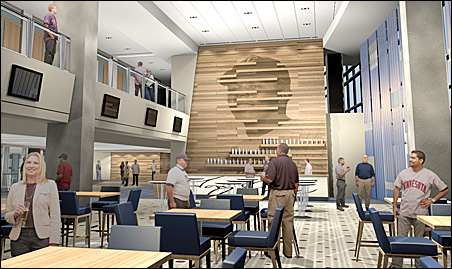 Illustration courtesy of the Minnesota Twins
The new stadium’s Legends Club will sell memberships for $1,000 and $2,000.

When Target Center was opened almost 18 years ago, it was ahead of the luxury suite curve. Some arenas of Target Center’s vintage didn’t even have suites. Target Center’s 68 suites (then) were sort of like very nice party rooms at a Radisson, fancy for the time.

Xcel Energy Center one-, two- and three-upped that 10 years later, with a sleeker 21st century feel and the amenities of business class on Singapore Airlines (or so I’m told). Suites aside, for the first time, “club seats,” were introduced into the market. These are seats on a mezzanine level that allow ticket holders to wine and dine at, essentially, a private restaurant. The entrance is special. The corridors are special. The customer is special.

But, unlike a suite, it’s not totally corporate. A law firm, an ad agency, a small business with key clients, can buy a club season ticket or four and still spend significantly less than the price of a suite.

Suites already selling fast
After a dozen years of fighting to get their new facility, the Twins didn’t want to blow this ballpark project. The suites were designed to fit into the Warehouse District, so much so that some team executives wanted to call the 55 suites “lofts.” Already, 44 have been sold, said team president Dave St. Peter. And, chances are, the team will increase the number of suites to 60 before Opening Day 2010.

(Interesting note: In the good old days — like five years ago — it seemed imperative that each suite in every stadium should have its own bathroom. This way, suite guests didn’t have to mingle with the mustard-stained fans with painted faces. But, Twins market research showed, potential suite users — especially women — preferred to leave the suite and go to a dedicated restroom outside of their suite. So, these new suites won’t have their own bathrooms. Thought you’d want to know.)

What’s particularly new to the Twin Cities market is what the team is calling “membership” to the Legends Club, but is, essentially, a PSL, or personal/private seat license. The PSL has been floating around in various stadium deals for more than a decade, but no pro sports team has done that in Minnesota. You can bet your Harmon Killebrew rookie card the Vikings will, if they ever get a chance to market a new facility, rely heavily on PSLs. 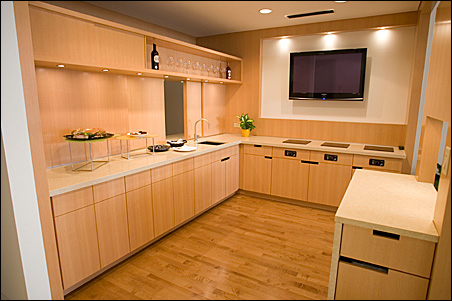 Here’s how it works. You pay an upfront fee. That fee buys you the right to buy a ticket in this club. That right remains with you. If, two years down the road, you want to sell the right to your seat on the secondary market, you will be able to do so. If you want to hand it over to your mother-in-law, you can “transfer” it at no cost.

There are 3,000 of them, and the “membership” will generate about $4 million for the Twins coffers. It’s a way to get some additional dough without requiring current season ticket holders to pay for priority seating.

New arrangements amount to user fees
For those long opposed to public funding for stadiums, this concept is, one could argue, a user fee. Laura Day, Twins senior vice president for business development, said the team will put those upfront dollars into stadium amenities.

It can also be argued that suite revenues — probably about $8 million a year for the Twins — serve to subsidize cheaper ticket prices. St. Peter and Day promised that, when the new stadium opens, there will be a sizable inventory of $12 and $15 tickets available.

If this all sounds very corporate, well, that’s the deal in pro sports these days, in case you haven’t noticed.

Jerry Bell, the man who lobbied hardest for the stadium for owner Carl Pohlad and who is now overseeing construction, said, “You know, I don’t particularly like to watch the game in a suite.” Bell is a working-class kid from North St. Paul, and still lives there. “I mean, how many people are keeping score up there? Suites are for corporations. Believe me, we will have very nice options for average people.”

But know this: as you move to the front of this model luxury loft, you gaze out of the 46th floor of the former Multifoods Tower. Down there, way down there, the Twins ballpark, just behind Target Center, is taking shape.

Folks, this particular stadium war is over. The suites and club seats in the House That Carl — and Hennepin County Taxpayers — Built is going to be nicer than my own house.