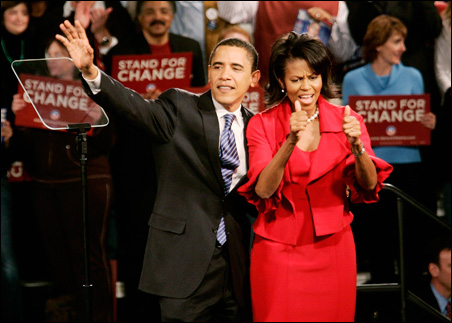 REUTERS/Jeff Haynes
Barack Obama and wife Michelle at a Super Tuesday rally the night he defeated Hillary Rodham Clinton in Minnesota’s caucuses. Obama’s margin of victory was a surprise, in part because of the lack of pre-caucus polling in the state.

Who knew that Mitt Romney would crush John McCain and Mike Huckabee in Minnesota on Super Tuesday? Who knew that Barack Obama would so easily smother Hillary Clinton? Who expected traffic jams outside polling places, voters casting ballots on Post-it Notes, and would-be voters giving up before they could get inside to vote?

The answer: Not many of us.

But perhaps we shouldn’t be surprised that we were so surprised. After all, we went to the caucuses with less information in hand than usual.

In previous elections, Minnesota’s two largest newspapers, sometimes working with television stations and others, surveyed Minnesotans before the presidential caucuses to ask about candidates, issues and — sometimes — likelihood of showing up at caucuses. But that didn’t happen this year.

“There was none,” said Larry Jacobs, director the Center for the Study of Politics and Governance at the University of Minnesota’s Humphrey Institute and one of the directors of a poll the institute does with Minnesota Public Radio.  “Frankly, there’s been a disinvestment.” He attributes that not only to the high financial costs, but political costs as well. Pollsters and news organizations take heat from political parties who don’t like the results. “Polling is very expensive financially… and politically,” he said.

The Star Tribune used its Minnesota Poll extensively in past elections, probing Minnesotans opinions about elections, but also about issues ranging from transportation to education funding and other topics. As the newspaper fell on harder times, the number of polls diminished.

Star Tribune assistant managing editor Dennis McGrath said money was not a factor in the decision not to conduct pre-caucus polling this year. It was discussed, but editors questioned whether a poll could be reliable given the difficulty of predicting who would attend the caucuses.

“One problem is polls like that get trashed and therefore lose some value if they aren’t screening likely caucus-goers,” McGrath said. He added that the paper intends to poll Minnesotans before the general election.

The Pioneer Press had a brief discussion about polling, but chose not to. Why? “The ugly truth? Money,” said politics editor Maria Reeve. “There wasn’t a source of funding available.” But she, too, said the paper questioned whether a poll could accurately screen for caucus-goers.

But Dave Peters, a former senior editor there who oversaw polling before leaving in 2005, said the paper had cut down on some polling in recent years. “There were cases when we’d take two instead of three. There was a money factor,” he said. He, too, added that predicting caucus turnout is a difficult proposition even if a paper does conduct a poll.

‘It’s not rocket science’
But the Des Moines Register appeared to do it pretty well. Its Iowa Poll, taken before its caucus in January, found that 60 percent of likely Democratic caucus-goers would be first-timers, suggesting a huge turnout in Iowa compared to other years. (An independent entrance poll on caucus day confirmed it, putting the number at 56 percent.) The poll had Obama leading by 7 percent over Clinton and 8 percent over John Edwards. (Obama ended up beating them both by 8.). It put Huckabee ahead of Romney by 6 percentage points. (He won by 11.)

Predicting caucus turnout “is complicated [but] it’s not rocket science,” said David Yepsen, who’s covered politics for the Register for more than 30 years. “There’s no reason why some pollster in Minnesota couldn’t do this … They are tricky. That’s especially true this year because of the prospect of so many new people. So I can see where a news organization is going to say, ‘This is going to cost us a ton, and we could wind up getting egg on our face. Let’s save the money.'”

One poll in Minnesota did provide some forewarning of the heavy turnout that was to come on caucus night. A survey (PDF) by Minnesota Public Radio and the Humphrey Institute, conducted in late January, found that more Minnesotans than usual had “a great deal” of interest in the presidential election. Sixty-four percent of Democrats and 52 percent of Republicans professed a great deal of interest.

The MPR/Humphrey Institute Poll was not designed to predict the outcome in the caucuses — and it didn’t.  The poll interviewed a sample of the voting age population in the state, not likely voters, nor even registered voters.  Consequently it couldn’t model the likely caucus attendees.

In the weeks before the caucus — when national polls showed Obama surging — the MPR/Humphrey Institute Poll found that Minnesota Democrats favored Clinton over Obama by 40 percent to 33 percent. (The margin of sampling error was 4.5 percentage points, and the poll was conducted when Sen. John Edwards was still in the race.)  But Obama crushed Clinton on caucus night, 66 percent to 32 percent.

On the Republican side, the poll showed McCain with 41 percent among Minnesota Republicans, with Huckabee second and Romney third. But caucus-goers actually favored Romney overwhelmingly.

Does it matter?
Polls have always gone hand in hand with American journalism, dating back to the 1930s and 1940s, the Gallup, Roper and Crosley era.  Since the early 1800s American journalists have tried to calculate candidate support, knowing their audience wanted every scrap of information they could get to help them decide which candidate to support.

But some might suggest that less polling is a good thing. News organizations are often criticized for over-emphasizing the horse race, reporting who is ahead in the polls rather than focusing on issues and positions so citizens can make up their own minds.

The media were skewered after reporting on polls showing Obama would win big in this year’s New Hampshire primary. Clinton won. Even Tom Brokaw jumped into the debate: “I think that the people out there are going to begin to make judgments about us if we don’t begin to temper that temptation to constantly try to get ahead of what the voters are deciding,” he told Chris Matthews of MSNBC’s “Hardball.”

Butch Ward, a distinguished fellow at the Poynter Institute, the well-respected journalism school based in St. Petersburg, Fla., wrote recently that journalists overuse poll data “in the vain hope that we can circumvent this messy, costly and long job of covering a presidential campaign and get to the bottom line as quickly as possible: Who’s gonna win?“

Ward sited a study by the Project for Excellence in Journalism and the Joan Shorenstein Center on the Press, Politics and Public Policy, which found that during the early months of the campaign, the media focused more on the horse race than on the candidates’ backgrounds or policy.

Polling and the town meeting
But others argue that there are good reasons for such polls, too.

Democracy is — or should be — a deliberative process, said Phil Meyer, a journalism professor at UNC-Chapel Hill and a former president of American Association for Public Opinion Research (AAPOR). In making up your mind about a candidate or an issue, it helps to know what other people think, Meyer says. Good polling can help create something like a town meeting on a large scale.

Polls provide practical help to election officials as well, said Secretary of State Mark Ritchie. If they indicate that interest is low, officials can search for better ways to get the word out about the caucus process, polling places and other information. If polls predict high turnout, officials and volunteers can be better prepared.

“A public official or a county auditor or a township clerk needs the information to be able to be well prepared for an election, to be able to recruit people who are excited or trusting, or if they’re not excited or trusting, we need to know that,” he said. “In other words, you can construct a more sophisticated argument for polling … if you are thinking about your public service mission.”

But one of the best reasons for the news media to poll at key times during the election — including just ahead of caucuses — is so their audiences won’t be at the mercy of campaigns and candidates who can release the polling information that they sponsored in dribs and drabs designed to help the candidate, not necessarily accurately inform the voter.

And in general, polling has been pretty accurate, according to AAPOR.  Articles in Public Opinion Quarter, AAPOR’s scholarly journal, showed that polling in the 2004 presidential election was quite accurate.  The Star Tribune’s Minnesota Poll, conducted by one of this article’s authors, was one of the most accurate in the nation that year and the most accurate in the state.  Its last poll before the election showed John Kerry ahead by 4 percentage points; he won by 3.5 points.

Where have all the polls gone?

By Chris Ison and Rob Daves